Up there with Amundsen and Peary....? 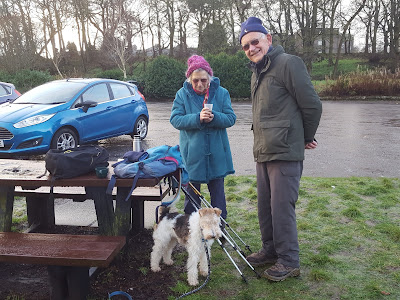 The latitude might only have been 57ºN but surely Tuesday's expedition from the car park at Dyce will rank alongside the exploits of Amundsen, Scott, Shackleton, Nansen and Peary in the annals of polar exploration.

In treacherously icy conditions, two cars, one containing myself and Gail, the other her intrepid friends M and J, reached the parking area beside the River Don at the appointed time - and only once en route did M and J's vehicle require the intervention of human muscle power in order to propel it forwards across a particularly slippery patch of tarmac...

Suitably equipped - parkas, woolly hats, boots, double layers of gloves, poles, provisions, dog treats etc. - the party then carefully inched away from the cars and successfully negotiated several feet of black ice to reach the safety of some railings beside the river path.

After a detailed evaluation of the conditions, it was decided to attempt to venture east, sticking where possible to the grass at the edge of the path as this offered superior footholds.

But after about fifty yards the valiant explorers were running out of options. J went to recce a possible route away from the river, saying as he left "I may be gone some time".  He returned with tales of a perilous half frozen bog, and the exhausted party chose to return to the picnic table beside the cars.

There, fortified by hot coffee from their flasks, and a packet of Lebkuchen, the party congratulated themselves on their safe return from such a daring feat of exploration, and decided to call it a day. Home fires beckoned. 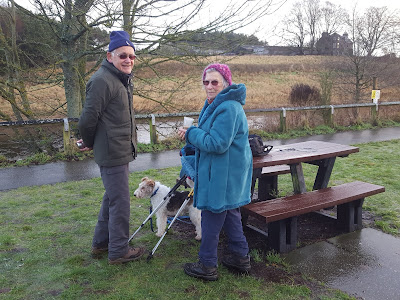 Whereupon the sun came out and a robin appeared in the hope of finding that the fearless adventurers had left behind some Lebkuchen crumbs... 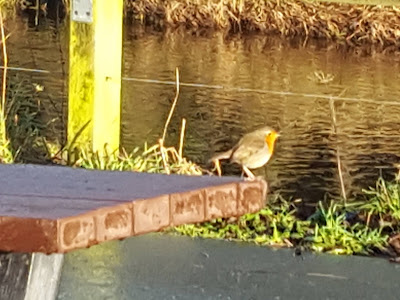 WISHING A HAPPY NEW YEAR TO ALL OUR FRIENDS!

Posted by Bouncing Bertie at 05:20