So nearly a brush with royalty

If Gail and her friends Yvonne and Neil had bothered to get going earlier on Sunday morning we would have arrived at Balmoral Castle in time to see the Queen attend the local church service.

Instead we were met at the car park at noon by a conspicuous security presence, although I must say that the young policeman we spoke to was all smiles and friendliness, enjoying the warm sunshine and seemingly not at all worried that our party constituted a terrorist threat.

Gosh it's a lovely place, the Balmoral estate. 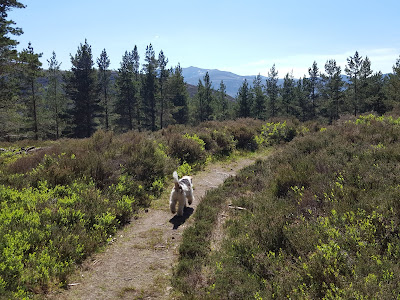 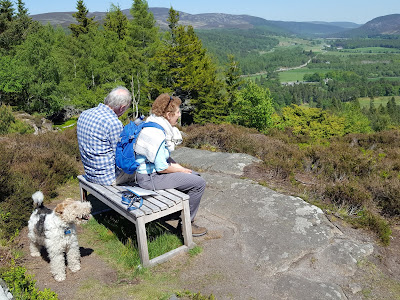 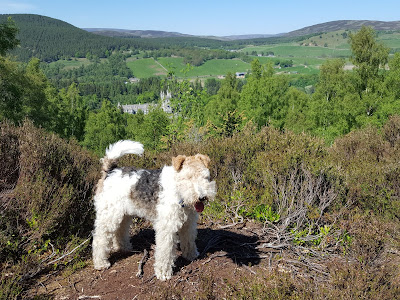 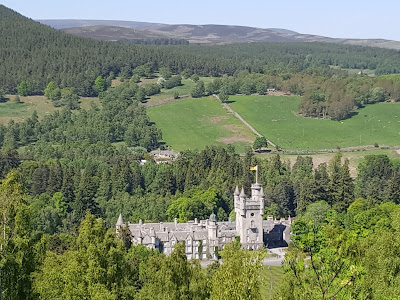 After romping around the forest and enjoying the fine views of Upper Deeside we approached the castle and were surprised to find the grounds still open to the public despite the Queen being in residence*. 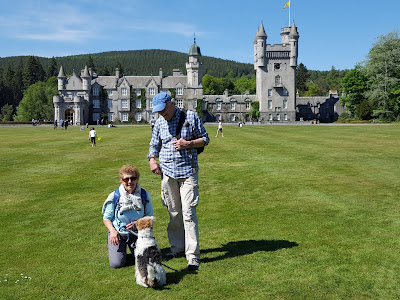 In the café I met this lovely young lady called Steph, who has taken a summer job on the estate.  Can you see the smart Balmoral insignia on her apron? 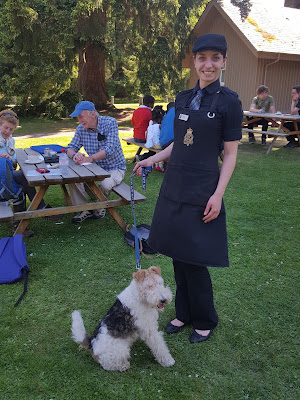 After giving me a biscuit and a nice pat, she told us how a couple of days ago she actually met with the Queen. I hope I am not going to get Steph sent to the Tower of London when I tell you she described her employer as "funny and really quite sassy".

Which made me feel even more sorry that I did not run into Her Majesty, as it's clear we have much in common (notwithstanding her well-documented preference for corgis). And no doubt Queen Liz too will now be regretting she missed the chance to have her picture taken alongside me and posted on this blog!

*Gail says: apparently the Queen is staying in a smaller house in the grounds of the estate, away from the visiting public.
Posted by WFT Nobby at 06:05 15 comments:

I have noticed that when humans are served food in a restaurant, they are allowed to eat it right away.

For example, here are Gail's recent visitors Jim and Lori tucking into some sticky toffee pudding (a delicacy which I understand is not commonly available in their home territory of the Pacific Northwest). 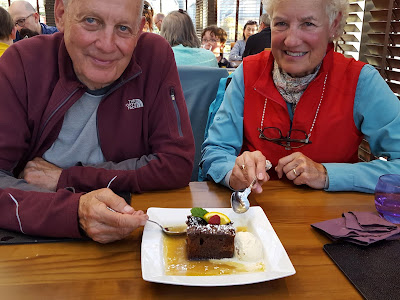 But when the waitress brings me a bowl of special home-baked dog treats, I am made to wait patiently until all the humans have finished eating their food and are ready to leave. 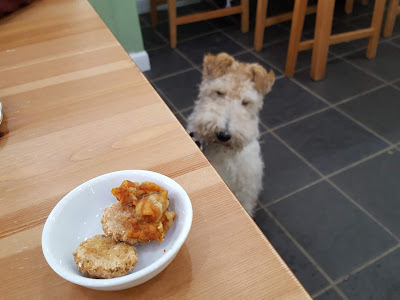 Apparently this is all in the cause of teaching me good manners so I don't expect to be given food from the table.

Have you ever heard anything more ridiculous?

Anyone would think I had been negligent in my "pose nicely Bertie" duties during our day out together in Stonehaven. 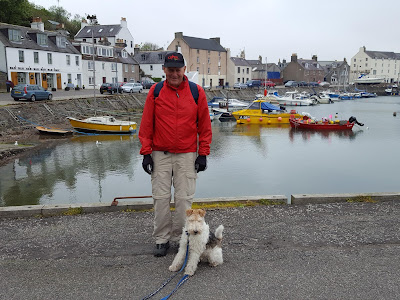 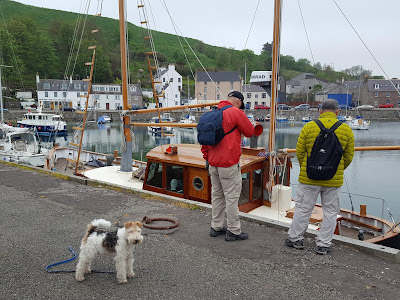 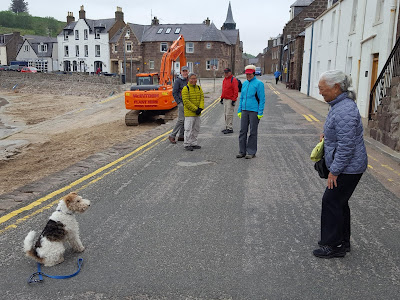 Which of course was not the case.

Gail has just returned from her trip cycling around Scotland with her friends from Washington State, and it seems she has very little of interest to report. 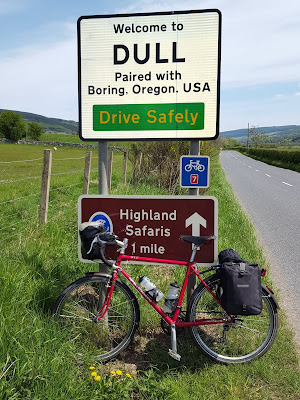 It's a well known fact that all the best holiday stories involve some sort of catastrophe and frankly I don't want to hear about how the weather was unbelievably warm and sunny and everywhere they stayed was lovely and the people friendly and no-one even had puncture until the final morning just before boarding the train in Inverness...  and I don't expect you want to hear about it either. 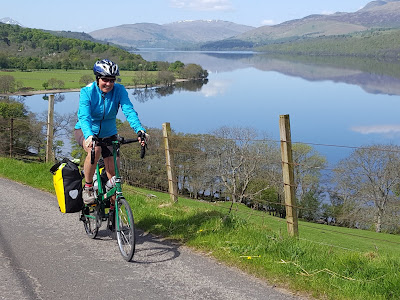 I was a little disappointed that there were no reports of encounters with the local wildlife... 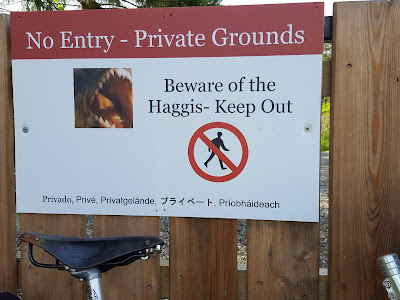 ....But I am most relieved that Gail rejected outright the offer of a kiss on the lips from Maya, the wee terrier lass who was watching the Scottish Cup Final in a bar in Kingussie on Saturday afternoon. 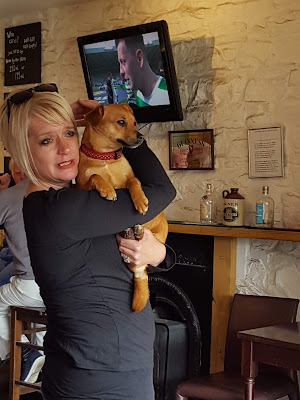 Surely, Gail's refusal was all about wishing to remain faithful to me, and had absolutely nothing whatsoever to do with the fact that she had earlier seen wee Maya licking her own nether regions with vigour?

I am now hoping that Gail has exhausted her urge to travel across the country on two wheels for the time being, and will soon revert to her proper job of taking me for nice walks and feeding me treats. 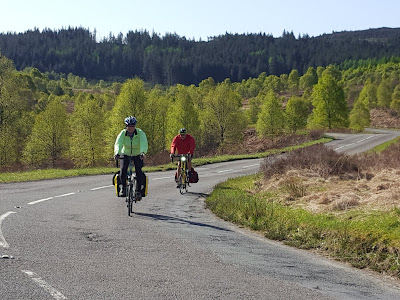 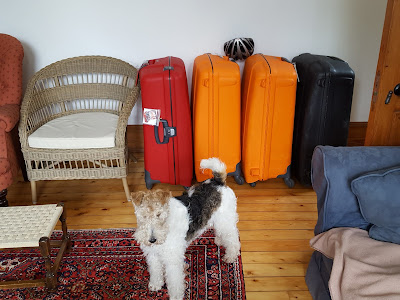 So our four American guests arrived on Wednesday and when I saw their luggage I was most relieved. It was quite clear Gail had been winding me up about them bringing their bicycles all the way from from Washington State and cycling around Scotland.

Well just imagine my horror when I found out what those suitcases contained... 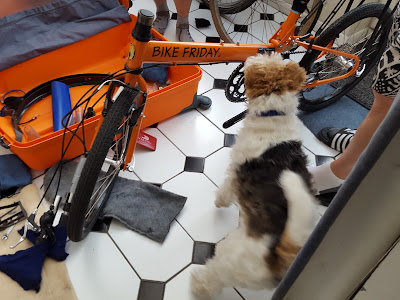 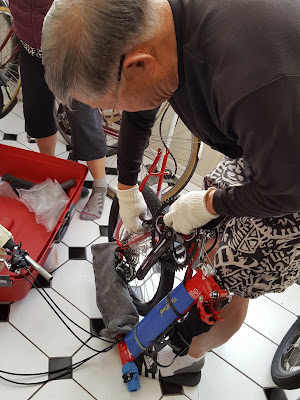 Yesterday they all went off for a 'shake down' ride to Drum Castle and back, and I stayed at home. As they headed down the road I heard Gail shouting "don't forget, keep on the left!" 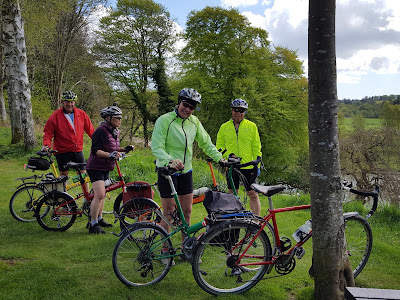 PLEASE don't tell anyone this, but between you and me, I was quite grateful for a spot of peace and quiet, unaccustomed as I am to having my home invaded by such talkative folk.

This morning our guests plus bikes have departed for Edinburgh (by train!) Gail tells me she'll be joining them in the Scottish capital tomorrow, when the planned "leisurely" bicycle tour around Scotland begins in earnest.* 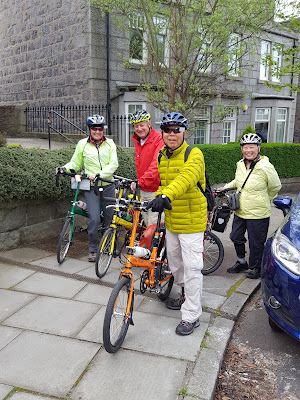 *Gail says: the plan is to ride along the Forth-Clyde Canal from Edinburgh to Glasgow, and then head north along the 'Lochs and Glens'  route from Glasgow to Inverness. Normal service on the blog will resume in ten days time. Meanwhile, Bertie will reside in comfort at Neil and Yvonne's house. 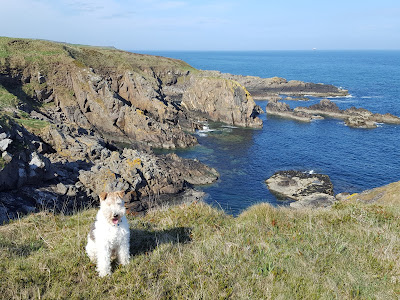 I guess you might be looking at the photo above and thinking that all is well with Bertie's world just now.

How wrong you would be.

Yes OK, I'll grant you, Gail did take me for a nice walk along the cliff path south of Aberdeen on Sunday afternoon and the sun was shining and the sea uncommonly blue.

But if you look closely at the photo you will perhaps spot faint clouds on the horizon...

So first of all, I might point out (and as those of you who know your geography will have already realised) my shadow in the above picture falls in a seawards direction, thus east, indicating that it was well into the afternoon when my walk took place.

Earlier in the day, Gail had, without so much as a 'by your leave, Bertie'  disappeared off on her bicycle for several hours, muttering something about needing to get in shape as her four cycling friends from the USA will be coming here a few days time.

Apparently Gail has planned a ten day tour, riding around Scotland, and I am to be abandoned to the tender mercies of neighbours Yvonne and Neil...

I shall be reporting on the arrival of the Americans in a few days time.

Gail tells me I am being wildly optimistic in hoping these fine folk will find me so inordinately cute that they will insist on fixing a dog carrier to one of their bikes and taking me along with them on the tour. 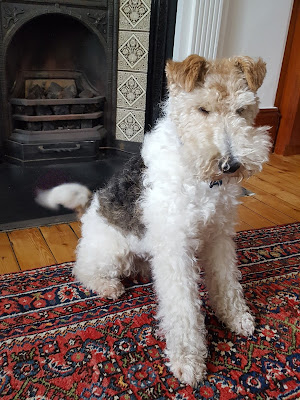 Bertie misinterprets the concept of a good bedtime book... 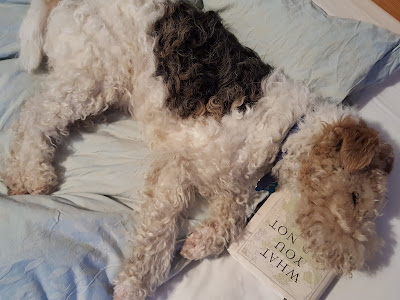 Morven - always worth returning to