Ahead of the storm

Back in Aberdeen, and Gail insists on a longer walk first thing this morning.
"Before Storm Arwen arrives". 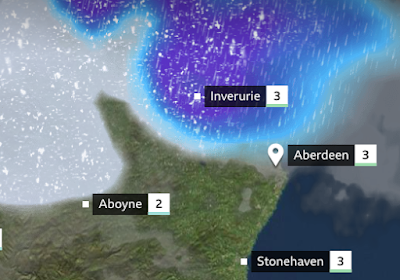 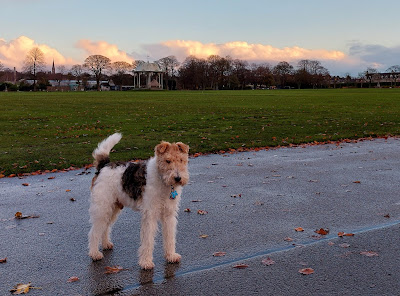 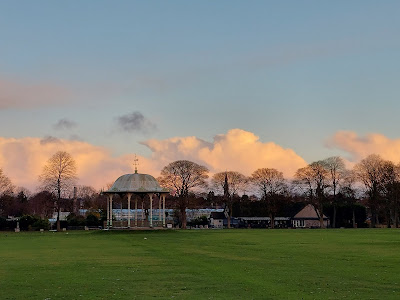 But by the time we reach the other side of the river the storm clouds are amassing and the wind gaining strength. 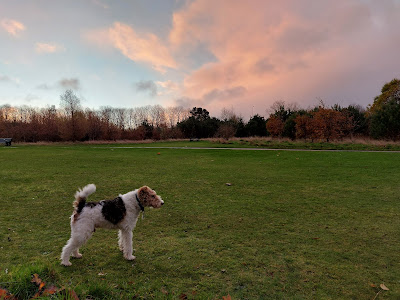 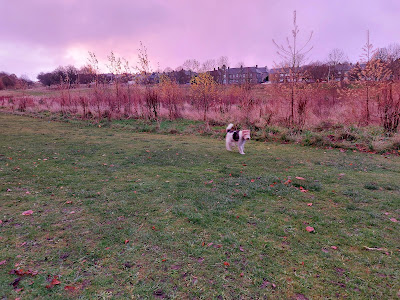 Did you know that our storms are named in alphabetical order?
Hmmm. So after Arwen, the next one will begin with B.
Storm Bertie has rather a fine ring to it, don't you think?
Happy Nature Friday friends!  And thanks once again to our blog hop hosts the LLB Gang.

It all started off so promisingly...
Gail was keen to investigate a new footpath she'd only just found out about. It goes through Kinloch Woodlands, a 3600 acre area of hill ground to the south of Shieldaig (half an hours drive from the Torridon cottage). The land is managed by a local charitable trust and a project aiming to regenerate native forest is underway.
Here's a map. The plan was to follow the path to Loch Dughaill,  indicated by the red dashed line.
A round trip of not much more than two miles. Easy peasy, right? 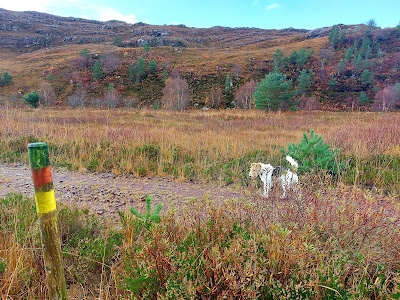 Except that before long the nice dry and well made track gave way to an indistinct path across rough and boggy ground... 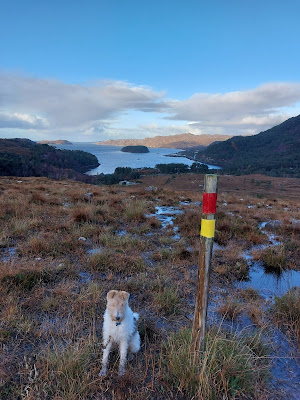 Did I mention it's been raining a lot round here lately?
No photos were taken of the second half of the route, as we stumbled through the mire, teetered on slimy rocks to cross a rain-swollen torrent and at one point Gail had to carry me after my courage failed when faced with a stretch of hummocky marsh where you had to jump between tussocks of grass to avoid slipping awkwardly into the fetid mud. (The photo below, taken from the internet, is a good illustration of these conditions.) 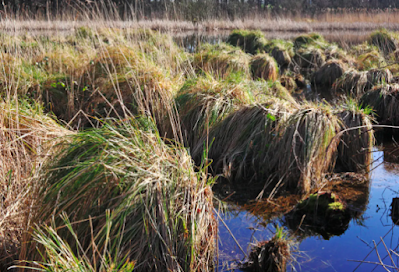 Shortly after we reached solid ground again Gail put me down but soon we turned back, with  the final descent to the Loch looking far from straightforward and Gail by now unwilling to tackle any further obstacles. To be honest, I wasn't sorry.
But can you believe that when a spectacular rainbow appeared in the sky near the end of the hike, Gail rejected my offer of my customary  'foreground interest' services on the basis that I looked "too bedraggled" and thus would spoil her photo... 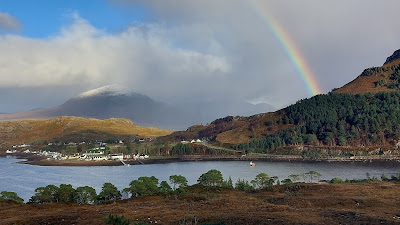 Too bedraggled. What do you think? 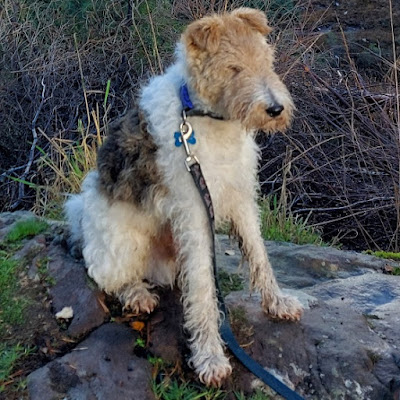 So we're over at the Torridon cottage for a few days.

While the weather can't decide whether to rain or snow... 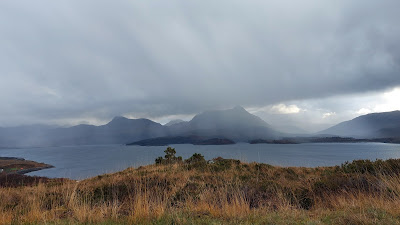 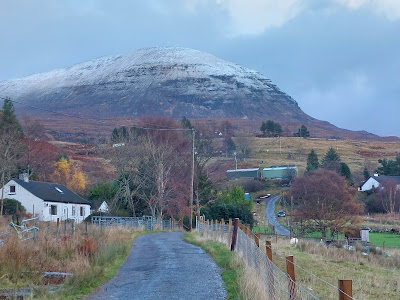 ... I am struggling to choose between comfy bed and cosy fireside. 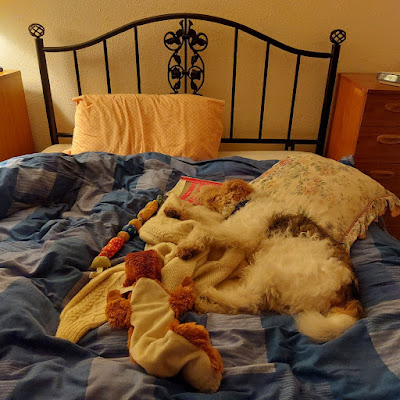 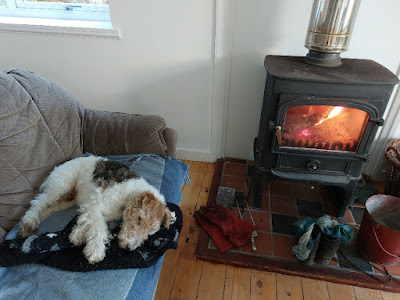 Are you facing any difficult dilemmas this week? 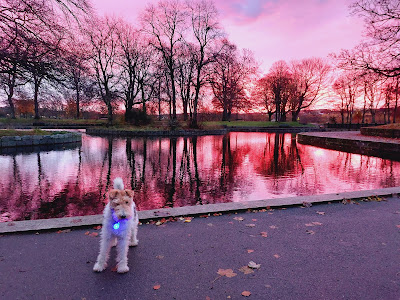 It is important when visiting the park at sunrise 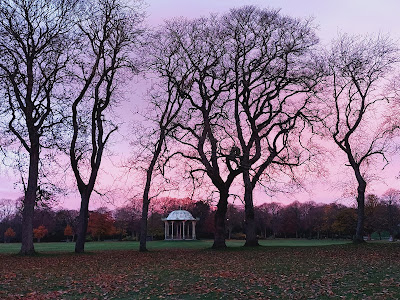 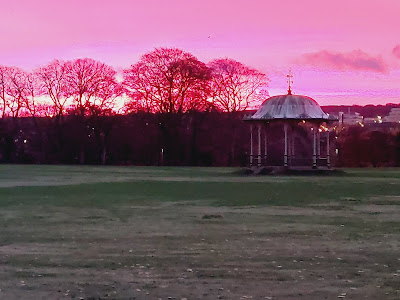 Not to get distracted from the main task at hand (or paw)... 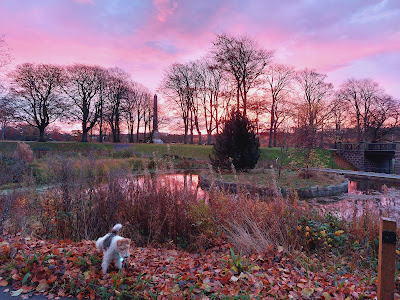 Happy Nature Friday friends!
Oh and we have a special bonus today - a late season fungal cascade spotted on an old beech stump in the woods by Banchory last week. Who can tell where the mushrooms end and the fallen leaves begin? 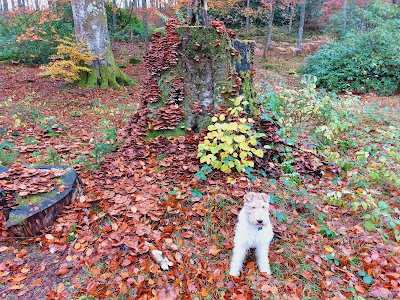 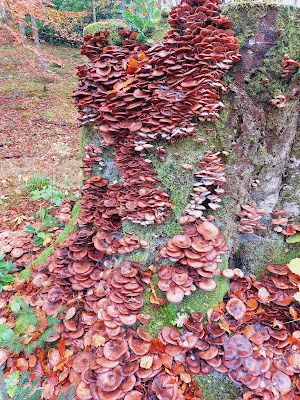 And just one more thing.
Can you believe we saw this solitary rhododendron flower in bloom (near where we saw the fungus)? In November! 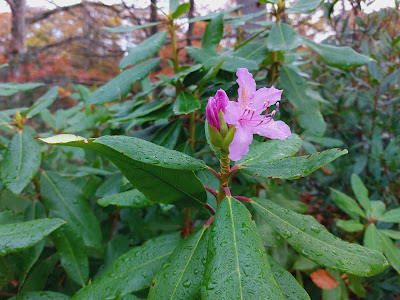 Thanks once again to our dear friends, the LLB Gang, for hosting the blog hop. Gail and I were so very sorry to hear the recent sad news about Arty. He was an adorable worldwide superstar, a character without peer, and his immense contribution to Blogville will not be forgotten. We are sending Rosy, Jakey, Sunny and their Mama and Daddy more love and hugs as they come to terms with their loss.
Posted by Bouncing Bertie at 06:00 18 comments: