Gail has been keeping bad company

I have been sneaking a look at some of the post-holiday emails Gail has been exchanging with her cycling friends in London.

You won't believe the things they've been saying about me and my blog.

SELWYN: "I say Woof Woof to Bertie (because in reality it is probably all he will understand)"
CHRISTINE: "I may even deem to have a look at Bertie's blog but.......I will have to consider that carefully, I mean it's a dog!!!"

I can only think that the combination of sunshine, cycling and a steady intake of too much vin rouge fried their brains.

It has certainly fried Gail's.

Yesterday, she had this 'bright idea'. For, yes you've guessed it, a bicyle ride with me!

There is a disused railway line just by the entrance to Duthie Park, a five minute walk from my house.  It's been converted into a bicycle path. Sometimes we go for a walk there, although from my perspective it's all a bit straight and flat and not nearly so much fun as the park itself. 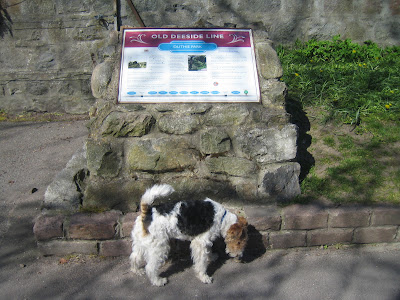 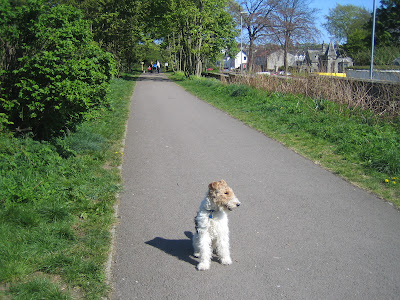 Now can you really imagine that I would happily trot besides Gail as she pedalled along on her old sit-up-and-beg bike? 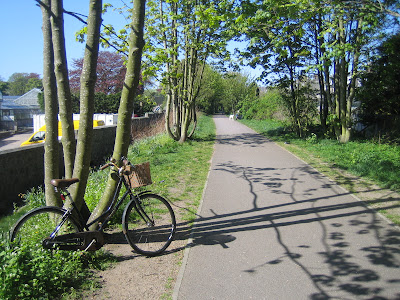 Let me tell you I did not co-operate. Instead, I came over all 'Hamish' for the afternoon and decided to stop and sniff everything. I absolutely refused to come within twenty yards of Gail when she was sat on that scary black monster. 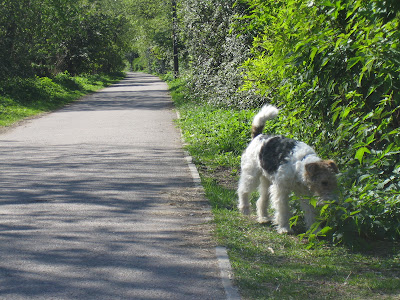 It is no coincidence that Gail did not once manage to capture me and the bicycle in the same shot...

On the way home, we ran into neighbour Mike, also on his bicycle. He observed my behaviour for a minute and had a little gloat. Mike has two dogs, Bonnie (border terrier) and Jack ('apricot' coloured toy poodle).

You would expect a man who knows his dogs - his wife Kirsty is after all a vet - to be telling Gail what a ridiculous idea, expecting me to keep up with her on a bike ride, would you not?

Instead of which, to my utter horror, I heard him saying,

"Oh yes, I once rode with Bonnie and Jack all the way out to Drumoak*. You have to go on the road for two miles so I stuffed them in my panniers, one on each side, their heads poking out of the flaps. They were fine."

Someone, PLEASE convince Gail that her leg was being pulled....

PS A bit of history: The railway used to be called the Royal Deeside Line, and was projected to run sixty miles inland from Aberdeen to Braemar, just past Balmoral Castle. However, Queen Victoria was afraid her privacy would be disturbed by hordes of tourists so she bought the land around Balmoral to prevent this and the line stopped at Ballater, well short of the originally planned end point. Just thought I'd point this out, this week, in case any friends were getting the impression that a monarchy is always a good thing..... 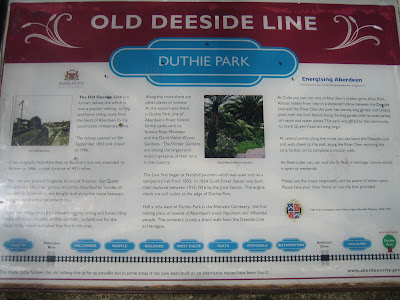 
I am gratified to be able to report that Gail had a very red face when she finally came to pick me up and take me home from prison 'those nice boarding kennels'.  She did keep insisting that the new skin colour was due to sunburn, but you and I know that it was without doubt a result of the deep embarrassment she was feeling at having so heartlessly abandoned me to go cycling with her London pals for a week.

Now please look carefully at these photos of Gail's bicycle (the red one - to match her face) in France.

I am quite certain that, like me, you have been struck by just one thought.

Lightly laden is it not?  (The bicycle, that is.)

Oh. I have just seen one more picture from the trip, depicting the unfortunate outcome of a bicycle on bicycle collision. Well. Perhaps I was better off in Scotland after all... 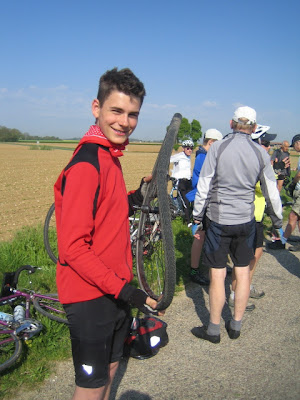 PS Thank you friends for all the valuable information you provided in your comments to my previous post. My not-to-be-missed lecture on gravity will take place some time next week.
PPS If you want to read an account of Gail's cycling trip, written by a 'proper writer' click here.
Posted by Bouncing Bertie at 19:41 19 comments:

In my role as Bouncing Bertie Boffin (Science Advisor to Blogville) I am pleased to announce that the next lecture in my Spring series will address the subject of gravitational attraction.

I shall be considering the issue from a relativistic standpoint.

Only those dogs so dense that light bends around them* will want to skip this class...

Recognising however that one or two of even my brighter pupils could find this a challenging topic (to others, I know, it will be a breeze) I am going to ask you for some personal data that will enable me to present the science in my usual accessible and canine-relevant fashion.

As you may already be aware, the gravitational force associated with a body is proportional to its mass. Now all I need you to do is to leave a comment telling me how much you weigh. It can be in pounds, kilograms, stones, whatever. If you are feeling very brave, you could also let me know the weight of your human Mum/Dad/carer/pack leader, although Gail has specifically asked me to advise that I cannot be responsible for the consequences if you chose to divulge what some humans consider classified information......

Regular readers know I am shortly going to prison with no internet access 'those nice boarding kennels' and so will be unable either to post or to visit my friends' blogs for the next week or so.

But rest assured I shall keep myself busy preparing a most interesting and enlightening lecture... 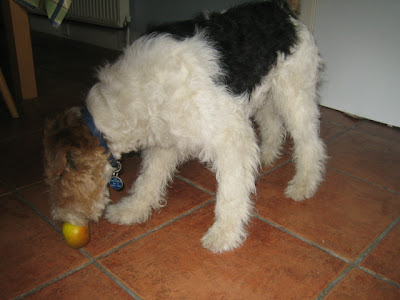 *With apologies to Malcolm Tucker (I wanted to put a link here for those who aren't familiar with the great Scotsman Malcolm Tucker, but couldn't find one that didn't lead you to lots of rude words, and this is supposed to be a family blog. You can google him yourself, but be warned...)
Posted by Bouncing Bertie at 08:00 36 comments: 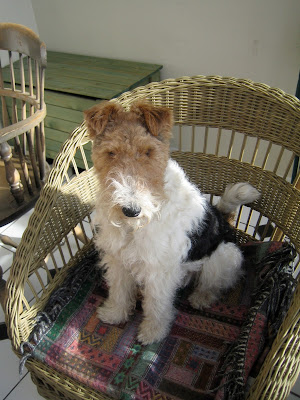 We are having a change from science today and considering a philosophical matter.

The question I have been pondering is, can a dog really be "TOO cute"?

I see this phrase all over the dog blogging world. But to me it doesn't make any sense at all. Surely there is no limit to the amount of cuteness that is possible? I mean, have you seen the latest photos of my sweetheart Katie? Or (stop press news) the brand new Rocky Creek Scottie puppies?

I think I need a little lie down so that I can look at the issue from a different angle.... 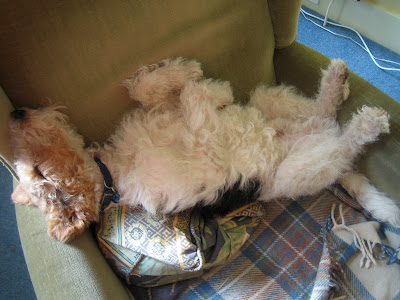 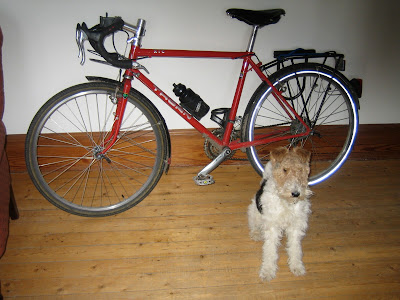 Some of my friends, I know, have to compete for attention with other dogs. We have all been reading with great interest about the dreadful situation that Scottie Jazzi has recently endured with newcomer Addy... Other friends have, heaven forbid, to share their living space with diverse species: cats, rabbits, hamsters etc.

I have a different problem, which I want to share with you today.

My main rival for Gail's affections is an inanimate object with two wheels.  Actually she owns three of these contraptions, but it's the one pictured here that I most resent. This bicycle came out of the shed a few weeks ago, and Gail keeps disappearing on it for hours at a time on what she refers to as 'a training ride'. (Different from a ride on a train, apparently).

I asked Gail how we are planning to celebrate what my American pals call my 'gotcha day', the anniversary of day when I first came to live here in this house. It's coming up in a couple of weeks. Can you believe what I was told?

"Tough luck Bertie,  I shall be on a bicycling trip in France with my London-based friends for that week, and you will be in prison  those nice boarding kennels."

Are there not laws against this sort of treatment?
Posted by Bouncing Bertie at 06:26 20 comments:

Am I in Texas?

You may have gathered from my previous post that Gail and I are spending a few days down in Nottingham with human Granny and Grandad. Well at least I was told it was Nottingham.
But we went for a walk in a nearby wood, and look what I found... 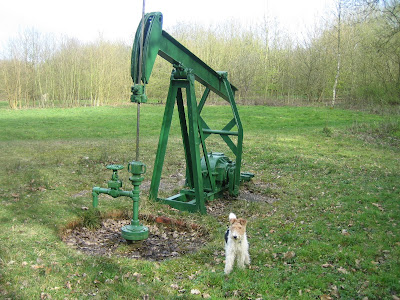 Yes it really is an old oil well (although Gail ﻿confused me for a moment by referring to it as a 'nodding donkey').
Most perplexing. I mean surely this is not Texas? Or Arabia? And it certainly isn't the North Sea!
And then we found this. 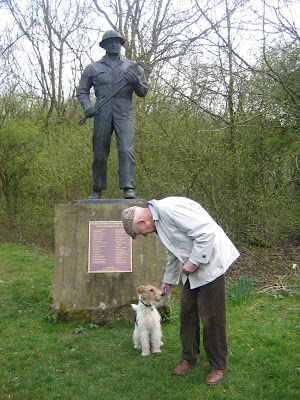 Well I asked wise old Grandad what was going on. He said, let's sit down for a minute Bertie, and I'll tell you a bit about the history of this place. 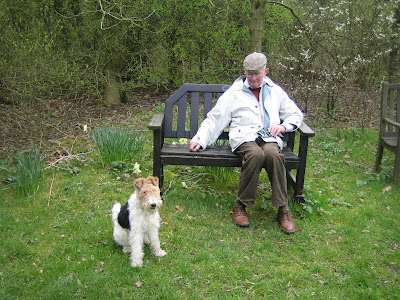 ﻿
And you know what? Here in Duke's Wood, near Eakring, Nottinghamshire, there really was once an oil field. In World War Two, when the country was desperately short of fuel supplies, a team of drilling engineers from Oklahoma came over to this very spot to help extract more oil, and faster. The big statue was erected as a thank you to those very same drillers. Grandad also told me that, while the drillers were here in Sherwood Forest, he was sweating in his thick woollen RAF uniform in the summer heat of Ponca City, Oklahoma, training to be a pilot.
Isn't the world a fascinating place?
Duke's Wood is nowadays a nature reserve, a lovely oasis of calm and beauty, fragrant with the scents of Spring.  Hard to imagine all that bustle and activity so many years ago.
Posted by Bouncing Bertie at 09:21 22 comments: