Bertie's successor Nobby has arrived and wants to meet you. He hope's you'll read his blog, which can be found at https://nicenobbynaughtynobby.blogspot.com/

Gail here:
Thank you friends for all your lovely comments on Friday's difficult post.
Oh how grateful I am to have enjoyed over twelve years of companionship and fun with my darling little Bertie. His presence steadied me through many major life events - the final illnesses and deaths of both my parents, retirement, the Covid pandemic and so much more.
If I were to ask him to list his highlights, I'm sure he would remind us of the time he slipped his collar, jumped off a just about to depart train and made a break for freedom, sprinting down the platform at Newcastle railway station with panicking owner in hot pursuit... Or the more recent episode in Glen Mark, when a solitary mountain biker with a broken chain inadvertently donated to Bertie his last chicken sandwich.
Bertie would also probably tell you about his exciting Christmas Day 2020 incursion into a care facility kitchen where the staff had to lure him outside again with a slice of turkey off some unfortunate resident's dinner plate.
For me, among so many wonderful memories, standouts include our two trips abroad by train and ferry, first to Switzerland in 2016 to see his beloved Doggy Godmother Tootsie (and her family Renée and Daniele), and then to Germany in 2019 to stay with dear friends Renate and Michael. 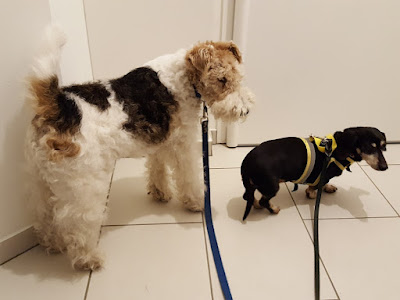 Then there were visits closer to home, notably with our wonderfully welcoming blogging friend YAM-Aunty in Dunoon. 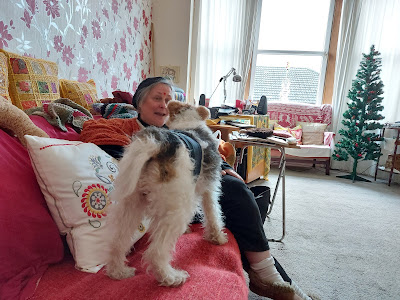 When travelling further afield was not possible due to Covid, Bertie always loved exploring new places around and about Aberdeen, especially when accompanied by M and J,  whose generous treat supply never ran dry. 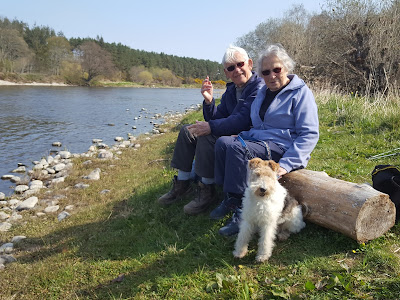 There are so many poignant memories of trips to Nottingham to see my father (Human Grandad - HGD) and mother (Human Granny - HGY).  Wee Bertie's presence never failed to lighten some dreadfully difficult times. Looking back to the earlier years, what joys we had with Blogville friends. In 2012 Bertie wooed his Valentine date Addi with the aid of a tank, and their virtual romance lasted longer than any I have ever sustained in real life! 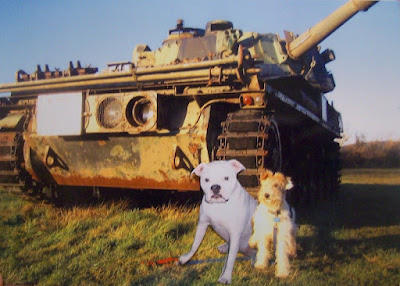 And then there was the time he took all his Blogville friends on a Geology Field Trip in Scotland...
Being shortlisted for the role of Ambassadog for Scotland in May 2016 was perhaps Bertie's great honour, and I believe to this day that he was only pipped at the post by winner George the golden retriever due to my all too not-Scottish accent! 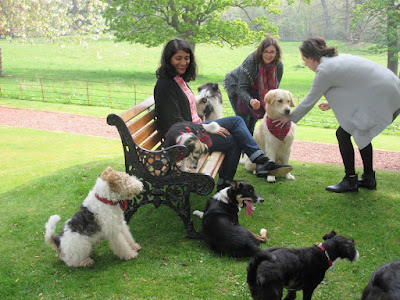 Bertie was diagnosed with an incurable cancer of the bladder in September 2020, and lived at least a year longer than was predicted. His whole life is recorded in this blog. Every minute was precious.
So to end, here's Bertie as I most want to remember him, out and about enjoying the freedom and beauty of the Scottish hills, the perfect companion in good times and bad. 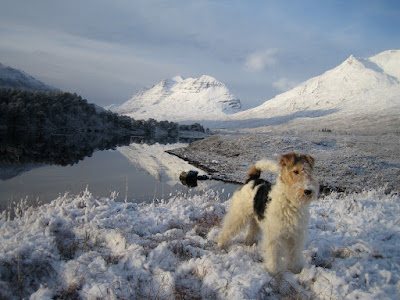 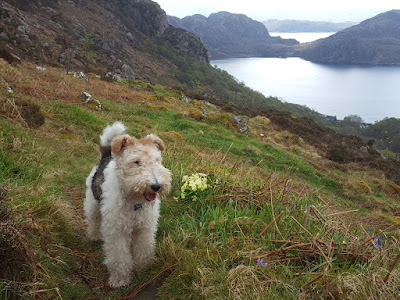 PS I now plan to take a short break from blogging but, rest assured, a new blog featuring Bertie's successor Nobby will appear before too long and I'll let you know where you can find it.
Posted by WFT Nobby at 06:00 44 comments:

Gail here again:
Thank you to so many readers for your kind and thoughtful comments on Wednesday's post.
After reviewing Bertie's condition with the vet yesterday afternoon, the sad news is that I've made the achingly difficult decision to have Bertie 'put to sleep' later today.
With his bladder cancer symptoms apparently causing more pain, on top of his deafness, poor eyesight and signs of confusion, he has lost so much of his former vitality and I didn't want to wait for his suffering to get worse.
Bertie has been such a splendid companion over the years, and especially during the long periods of Covid lockdown. I just feel numb right now and can't find the words, but a proper tribute will follow when I'm ready.
Meanwhile, here's a photo of Bertie on a walk in the woods with wee Ella earlier this week, his tail alert and happy, like it always used to be. 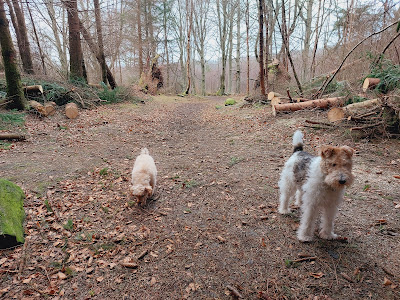 A turn for the worse?

Gail here:
At times like these, ordinary domestic troubles can seem trivial compared with dreadful events reshaping our geopolitics, but small sadnesses at home are still all too real.
"Behaviour changes observed in twelve year old dog, deaf and living with bladder cancer" is never going to make the headlines anywhere but this blog.
So what's been happening with Bertie?
First and most noticeable - during our morning walks in Duthie Park he often now seems disorientated - running off in random directions where formerly he would, more or less, follow a set circuit around the park perimeter. Also, he occasionally bumps into things, and I suspect that his eyesight, which long has been weak, has deteriorated further. But I also wonder what's happening in Bertie's brain.
In the house, especially towards the end of the day, Bertie can be unsettled, agitated, often just standing there, head and tail drooping, looking unhappy. Last night, while I was preparing supper I heard Bertie barking in the study (unusual in itself) and found him yapping at the empty armchair, as if I was sat there and he wanted something. When Bertie lies down, he manoeuvres himself into position very, very tentatively, as if to avoid pain in his abdomen. He rarely seems relaxed in the car nowadays - I think the vibration causes him discomfort.
Occasionally, when trying to pee, and at other times, a tremor in his rear legs starts up and persists for a minute or two.
Bertie is still eating well, digesting his food and maintaining his weight. He's also still keen to go out for walks, and at night, wearing his 'male dog belly band' he sleeps peacefully on my bed.
What best to do for my dear wee chap? 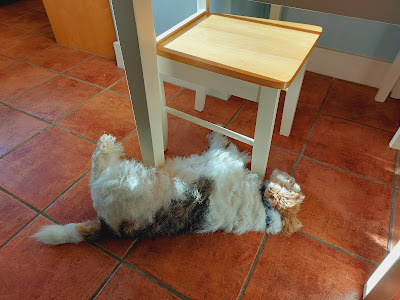 Patiently waiting - and a message of hope

On Saturday morning, Gail and I met our friends M and J in Duthie Park. Dogs are not allowed in the park café and so I was left outside and told to wait patiently and quietly. 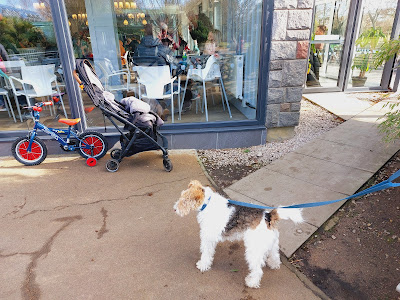 Which I did, because I am a Good Boy. Through the window I could see Gail and her friends deep in conversation over their coffee and scones (or in Gail's case a croissant, score 7/10).
You would never guess this from the pictures you've seen of M and J, and all you've heard about their intrepid exploits, but they are both quite a bit older even than Gail. The three humans were rather a long time in the café and later Gail explained that M, who is originally from Germany, had been talking of her experiences at the close of WW2 and how the appalling news from Ukraine had this week been prompting flashbacks.
M and her Austrian mother had spent most of the war sheltering at her grandparents' remote mountain farm in Austria. As the Red Army approached, and tales of atrocities inflicted on the defeated civilian population spread, nine year old M and her mother fled west through an area of active conflict, eventually reaching the relatively safety of the American controlled part of southern Germany. There were no German men of military age to be seen. It was all women, children and old folk left to fend for themselves.
This particular story has a happy ending as M saw peace return to her homeland. Later she moved to Scotland, enjoyed a fulfilling career lecturing at the University of Aberdeen, met and married a nice Scottish lecturer, J, and raised a lovely, talented daughter. Now there are two fine grandsons too. And M and J still have loads of energy for accompanying Gail and me on our weekly walks.
Gail and I hope against hope that all those traumatised women and children currently fleeing from the Russian onslaught in Ukraine will likewise live to see happier days.
Posted by WFT Nobby at 06:00 15 comments:

You will I am sure be pleased to hear that, on our one day of nice weather this week, Gail decided to prioritise my need for an outing over her desire to meet up with her cycling pals.
We went to an old favourite, Millstone Hill, a place whose tranquil beauty never grows stale.
In common with most of our forested areas right now following the recent storms, the first part of the walk was something of an obstacle course. 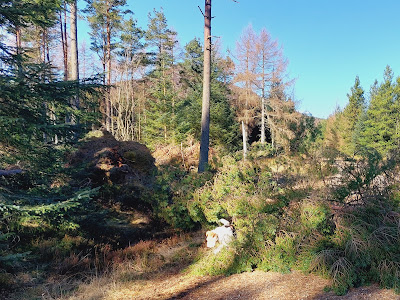 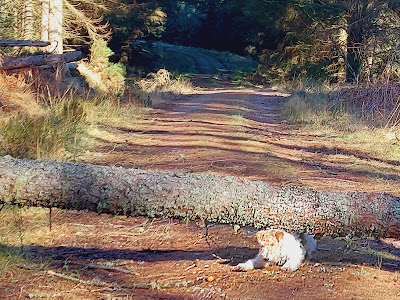 And if these days I stop more often as I ascend the Hill, let me assure you it is only so Gail has time to take in the lovely scenery on the way up and nothing whatsoever to do with what she sometimes calls my 'not as bouncy as they used to be' four legs! 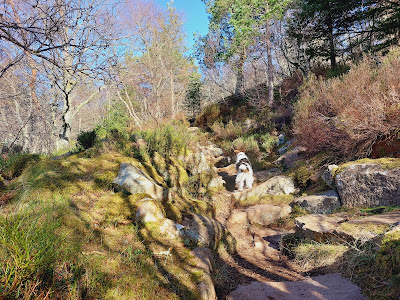 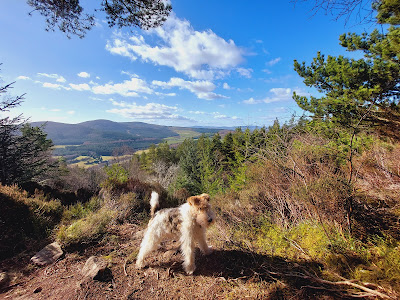 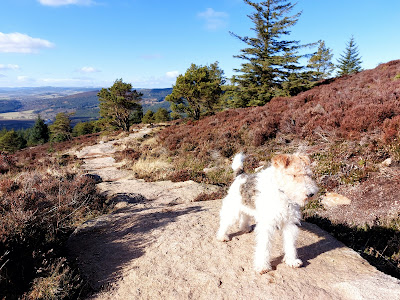 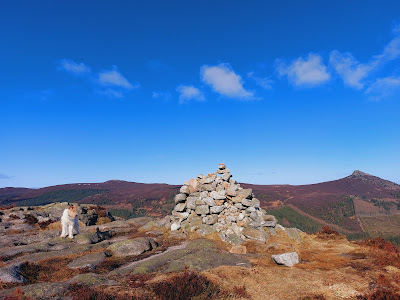 There is no holding me back on the descent. 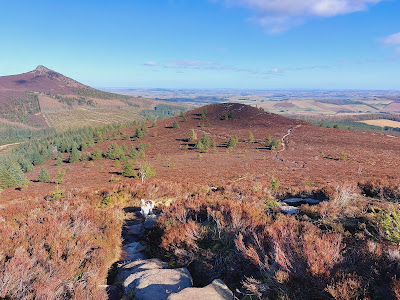 I was a bit surprised that when we got back to the car Gail didn't head straight home but instead drove a few miles further west and up a farm track. She then parked in the farm yard and instructed me to stay in the car and enjoy the view across the fields to the Ardmore whisky distillery, while she disappeared into one of the farm buildings to "spend a bit of time with Nobby"... 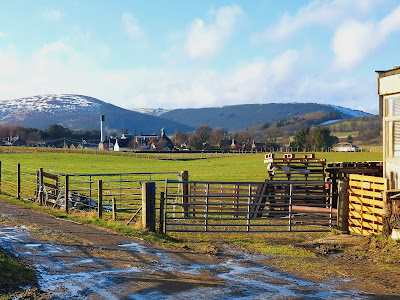 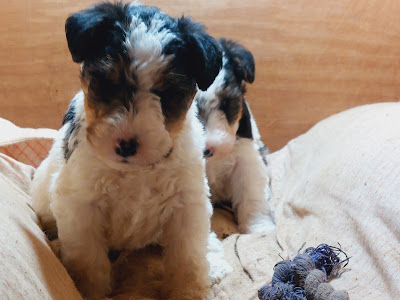 Oh and finally, by the way, here's a photo Gail took on her bike ride this week. Shame it wasn't sunny for them that day... 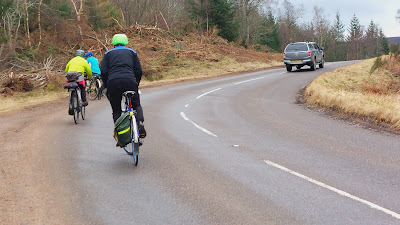 Happy Nature Friday to all our friends. Especially the LLB Gang of course. I hope you all have been making good use of any nice weather that came your way this week!
Posted by WFT Nobby at 06:00 15 comments: 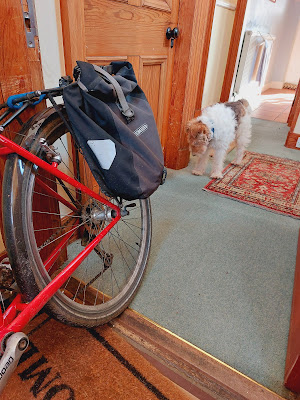