On weddings and dogs...

Do you remember me complaining last year when Gail attended a wedding in a romantic Scottish castle and I was not invited?

Well since my recall is good (and not just in the dog obedience sense), I can also tell you that at the time Gail said this:

“But Bertie, dogs don’t get invited to weddings”.

Always, in my mind, there was a grain of doubt about the truth of that statement.

And as usual, my instinct was correct.

You know my wire-haired fox terrier friend Horatio don't you? The one who lives in Edinburgh with his humans Scott and Amanda and his Vizsla brother Harris.

Well look what we spotted this week on Amanda's occasional blog:

She and Scott only went and got themselves married. And yes you read that right on the photo:

You can see the full report on the occasion if you click here.

You know, for once, Gail and I are in perfect agreement that this looks like the best wedding ever! Our favourite touch being the tweed bow ties for Horatio and Harris.

We are sure our readers will join us in wishing Scott and Amanda a long and happy life together.
Posted by WFT Nobby at 06:16 19 comments:

Maybe mountain bikers aren't so bad after all...

So I was about to jump in the back of the Mini after my latest agility competition adventure, when two passing - and agreeably muddy - mountain bikers, father and son, clocked my handsome self and stopped by for a chat with Gail.

Turns out they have a two year old foxy, from Granddach Kennels like me, and had observed that I was the spit of their wee fellow, Bob. As was confirmed when father asked son to show us Bob's picture on his iPhone.

Then father gave me a nice belly rub and complimented me on my lean and muscular physique (yes really), while Gail looked proudly on. To be honest, I was quite pleased at this point not to be wearing my birthday jumper, as these mountain bikers just possibly might not have recognised said sweater for the manly garment that you and I know it to be… 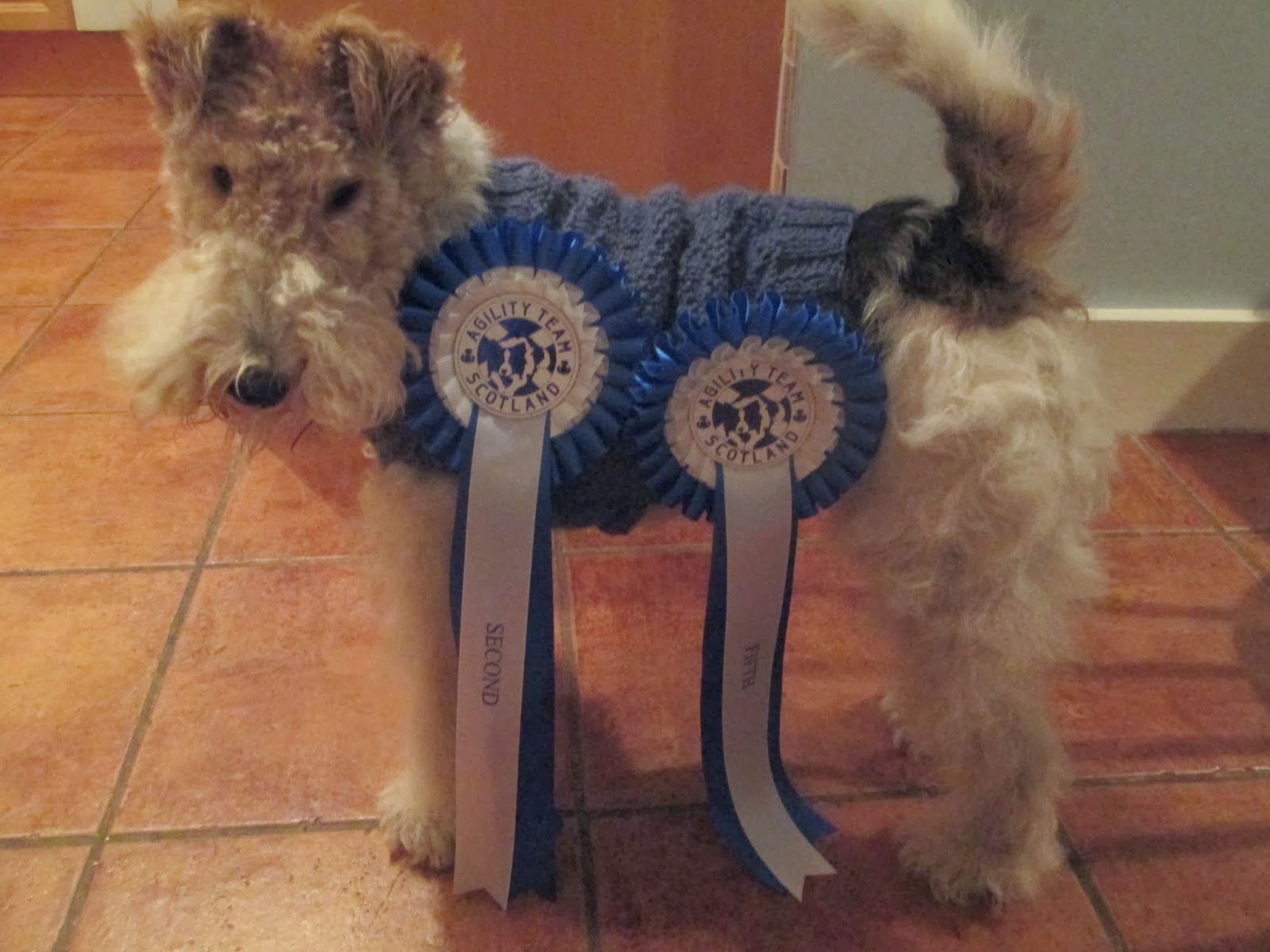 Oh and did I mention I won two more rosettes at the agility show? P.S. We were so sad this week to have to say a final goodbye to our beloved blog friend, Downunder Daisy, and are sure that our readers who knew her will join Gail and me in sending our warmest thoughts to her family. 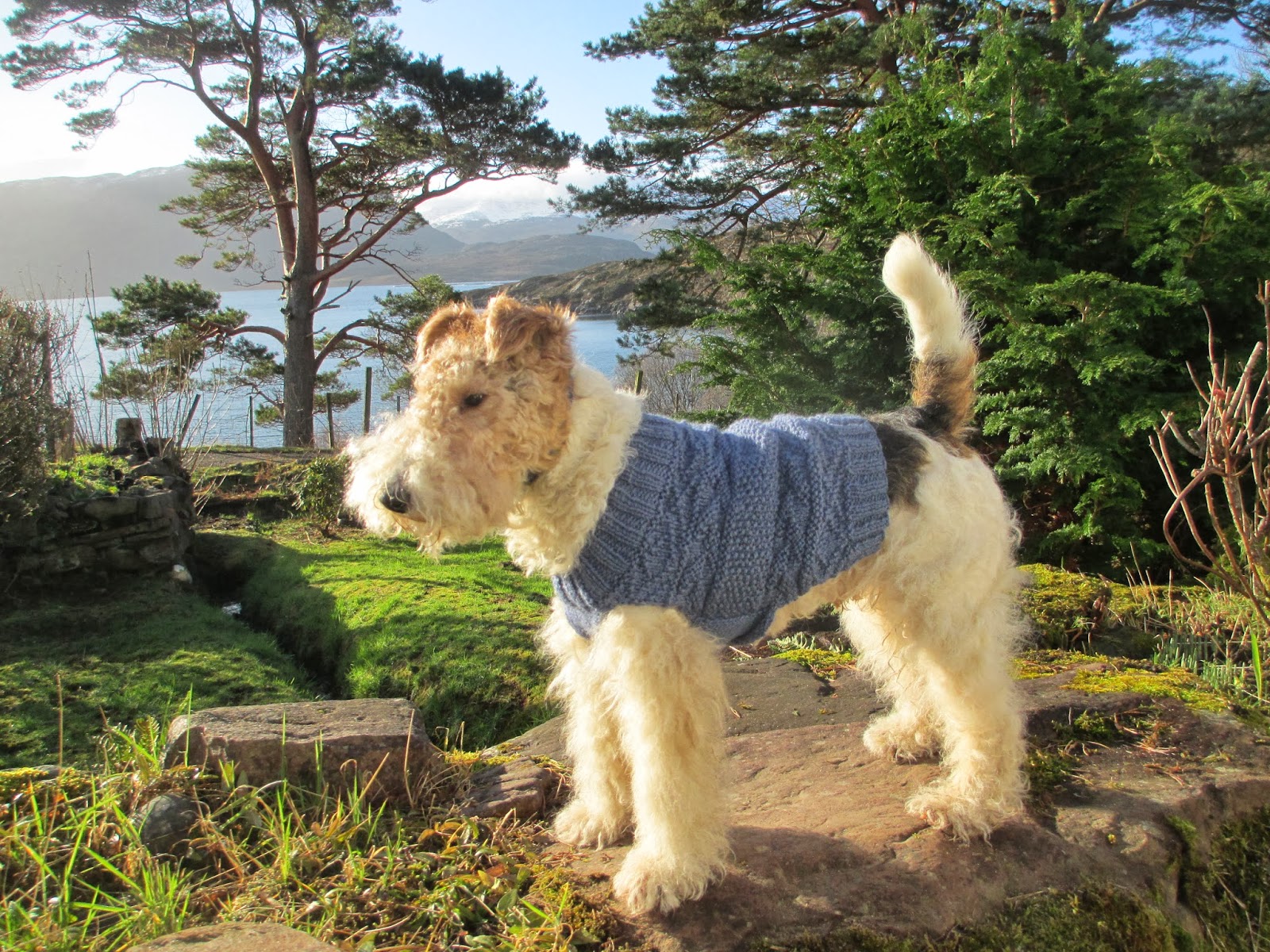 Oh, I feel so special. Look at me wearing my very own brand new and unique Guernsey sweater, hand-knitted by Gail. 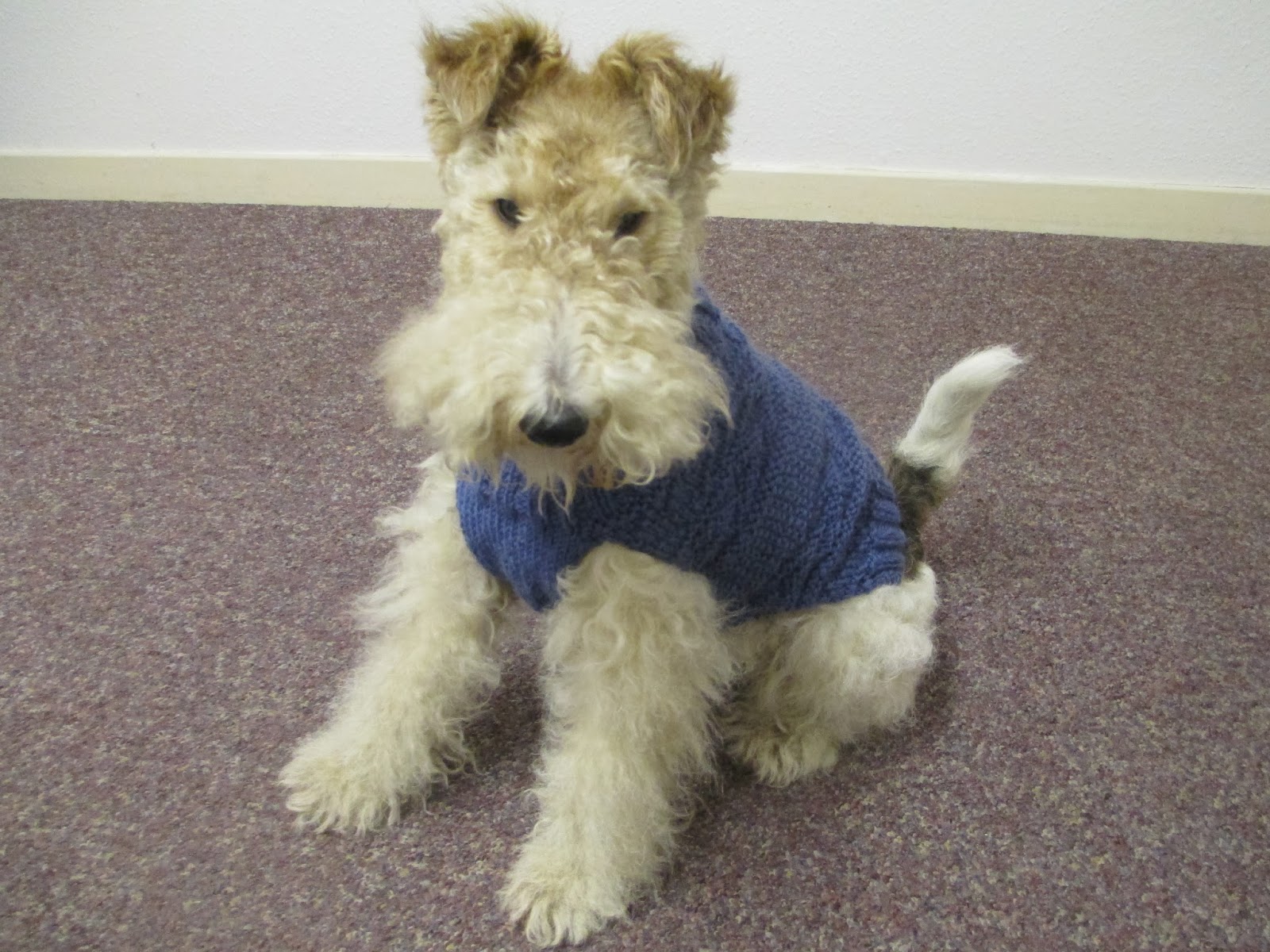 I know that in the past I have decried certain items of dog-wear as being a bit, well, a wee bit effeminate.

So I hope you have spotted that my birthday jumper is, as well as being snug and stylish, of a most manly design and entirely appropriate for a roughty toughty terrier. 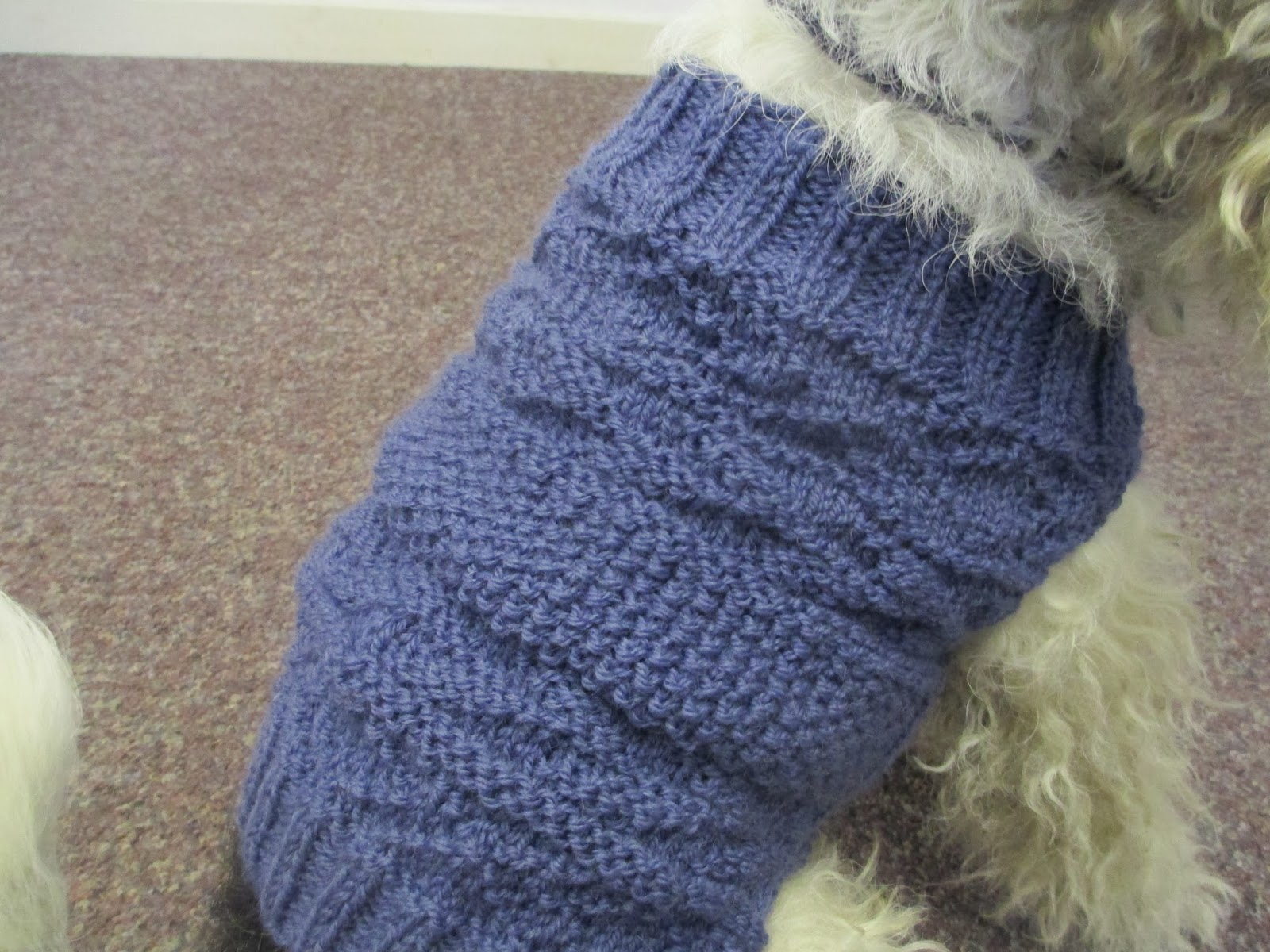 The intricate Guernsey (or 'Gansey') pattern was traditionally worn by brave seamen, and so, like Gail's language if she miscounts or drops a stitch while knitting, is not at all girlie. 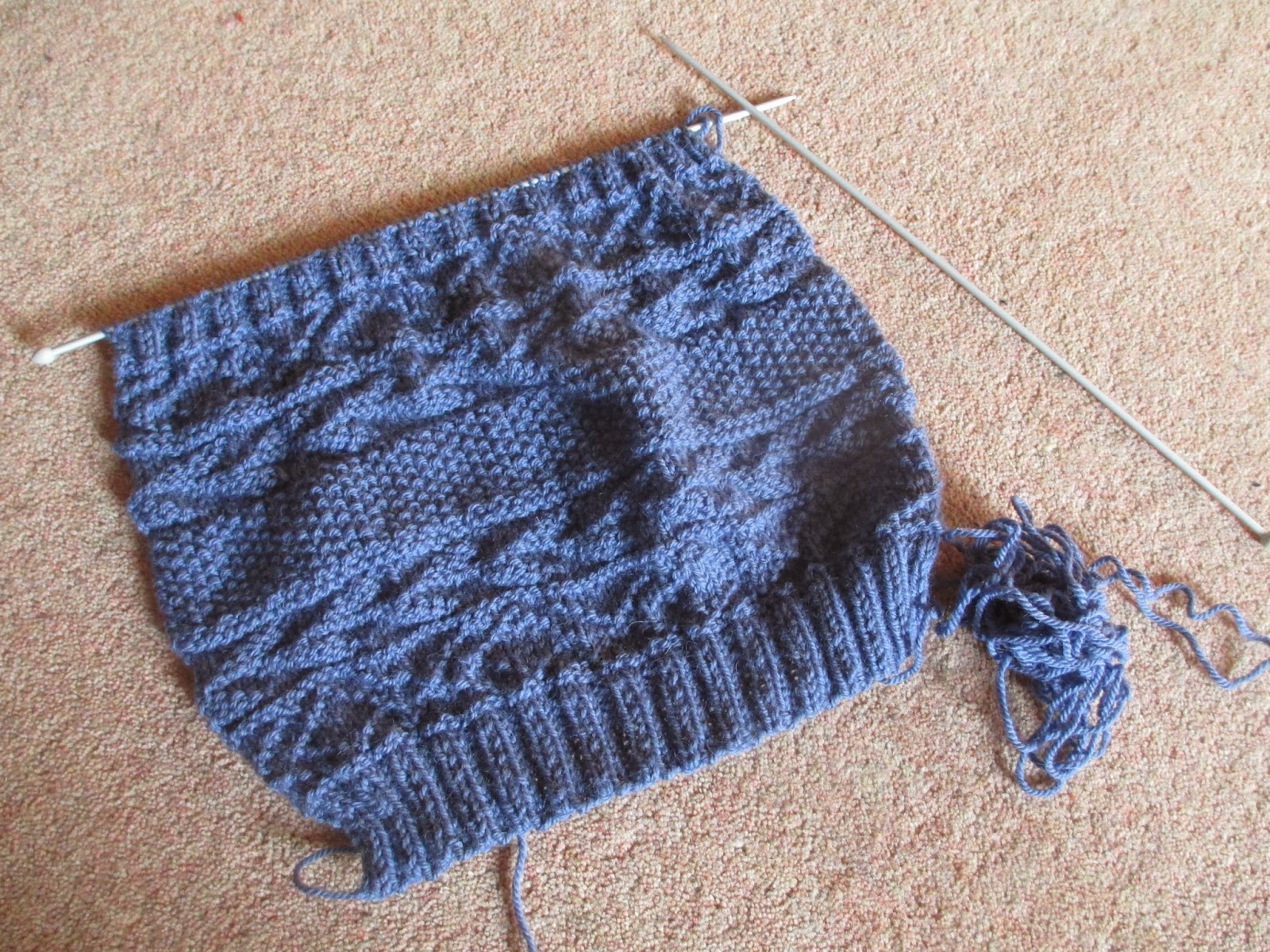 But gosh, this modelling lark is quite exhausting. 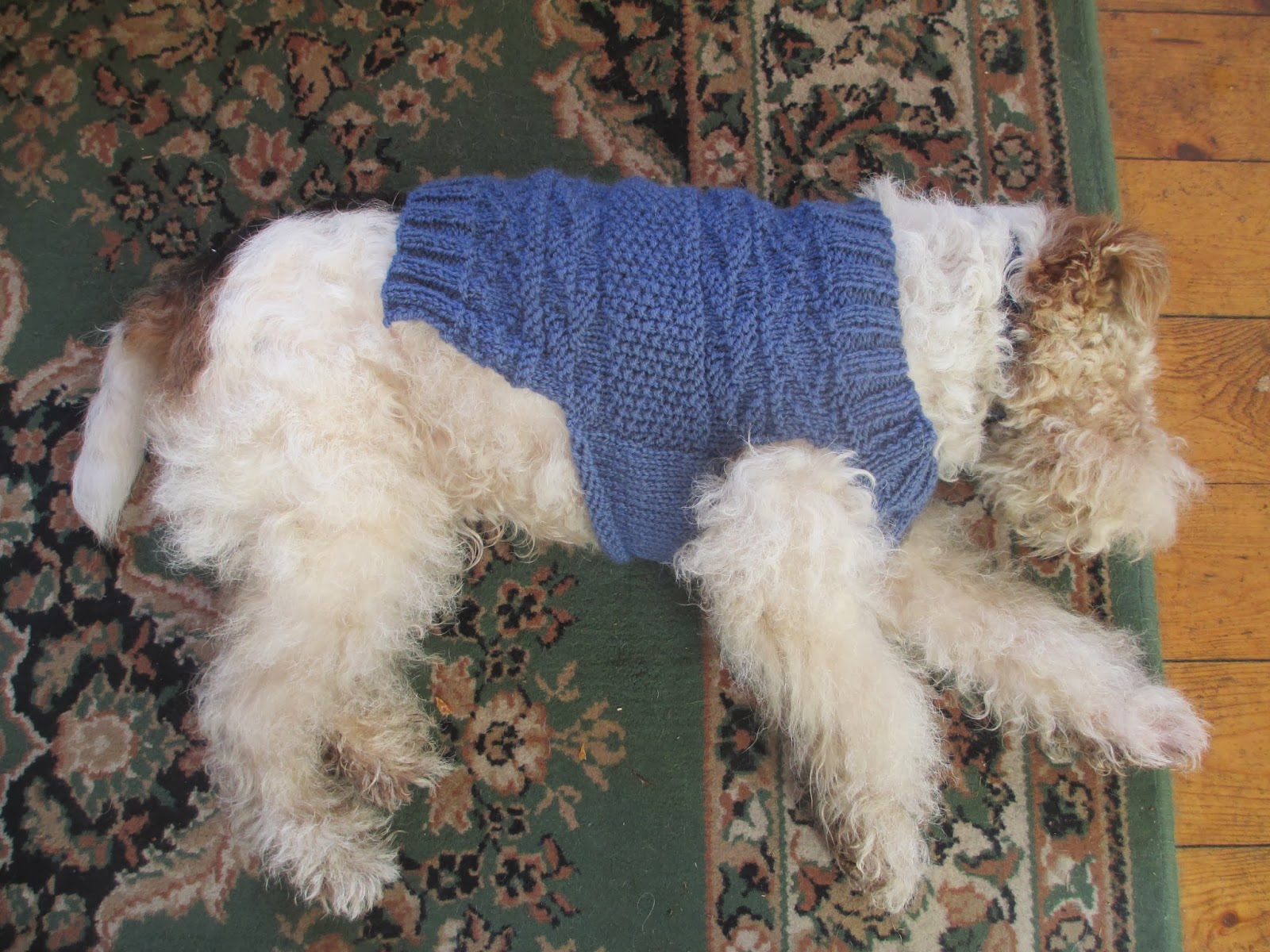 Kate Moss must have more stamina than I'd realised. 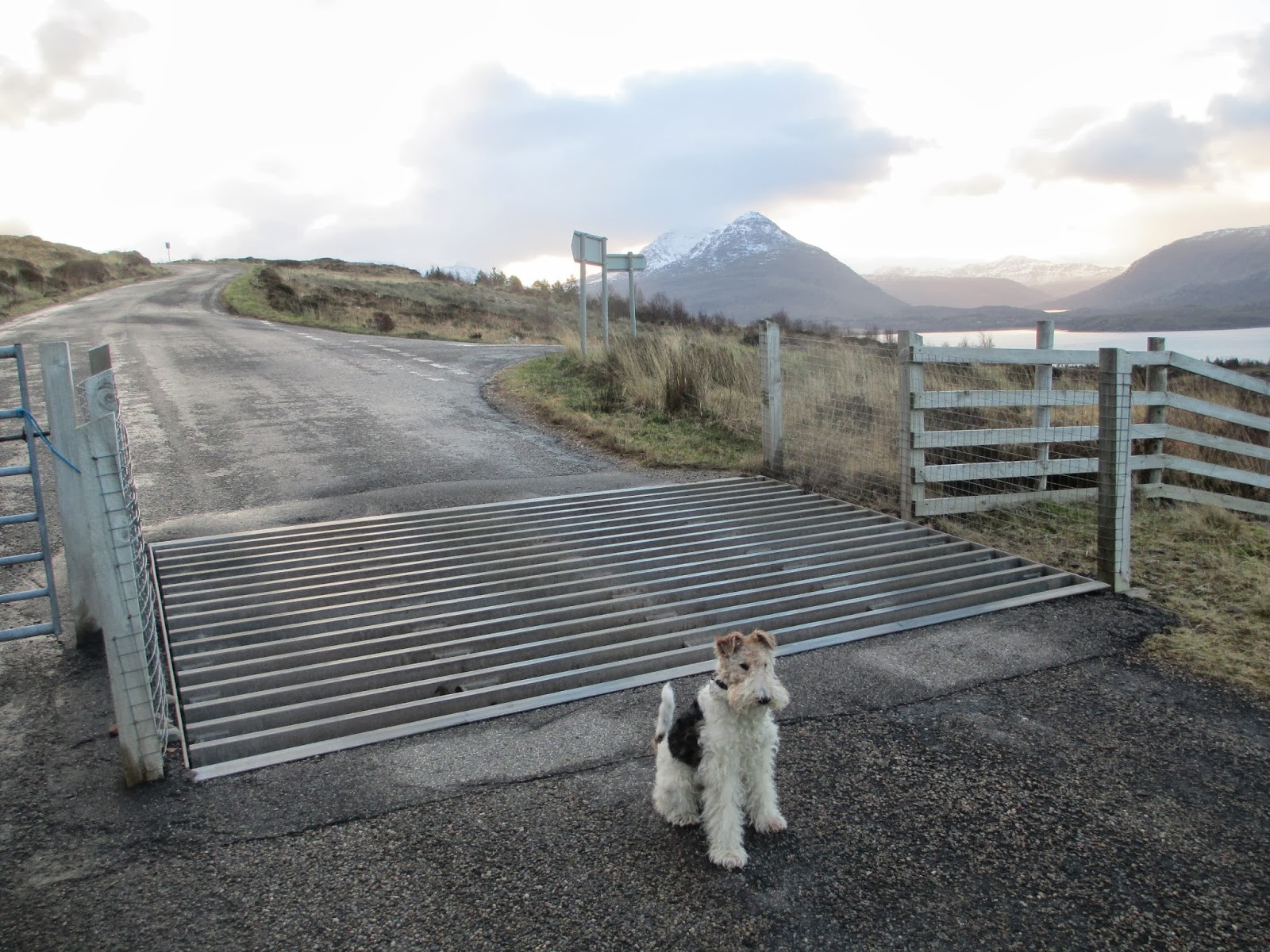 Gail, have you not noticed? We have come to a cattle grid. It is your job to pick me up and carry me across.

Oh for heaven's sake Bertie, you’re a big boy now. Why not give it a go by yourself, just this once?

I don’t think so Gail. Cattle grids are very dangerous. Remember that time when I was a pup and in my youthful enthusiasm I jumped on the grate over by Loch Clair, and fell between the rails and I was all scared and panicky and you had to rescue me. These traumatic events early in one’s life make a lasting impression you know.

Really Bertie, that was a long time ago, when you had barely worked out how to control your legs (which after all were growing a rate of about a centimeter a day). You’re much better coordinated these days, I’m sure you could manage.

I am totally not going to even try. Especially since you have your camera out. What would my sweetheart Addi think if I stumbled and she were to see a photo of me, legs flailing, sprawled all over the place like a drunken Torry quine on Union Street on a Saturday night?

Sigh. You are becoming as stubborn as Hamish. Who, incidentally, would have trotted confidently across this grid without a care in the world. Come on you big wuss.

Gail, you are forgetting that Hamish, a Westie, had the advantage of a low centre of gravity and bigger paws than me. And there is no need to be calling me names and making light of my deep-seated anxieties.

Bertie, I am so sorry. Don’t look at me like that.

Please carry me. Please. I am going to sit here until you come back and pick me up. 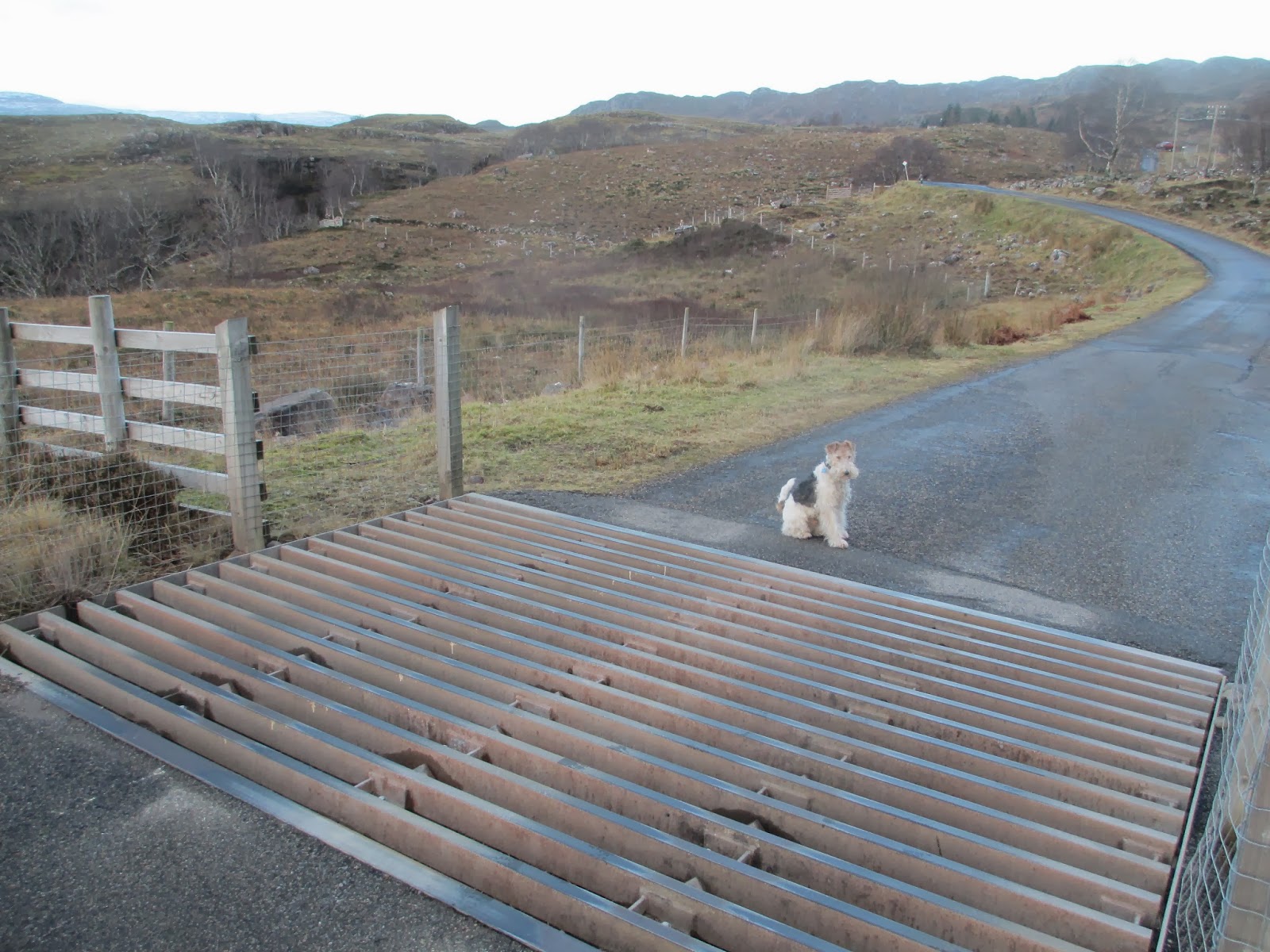 (After a lengthy stand off, Gail relents.)

All right then. You win. Again. Up and over we go. 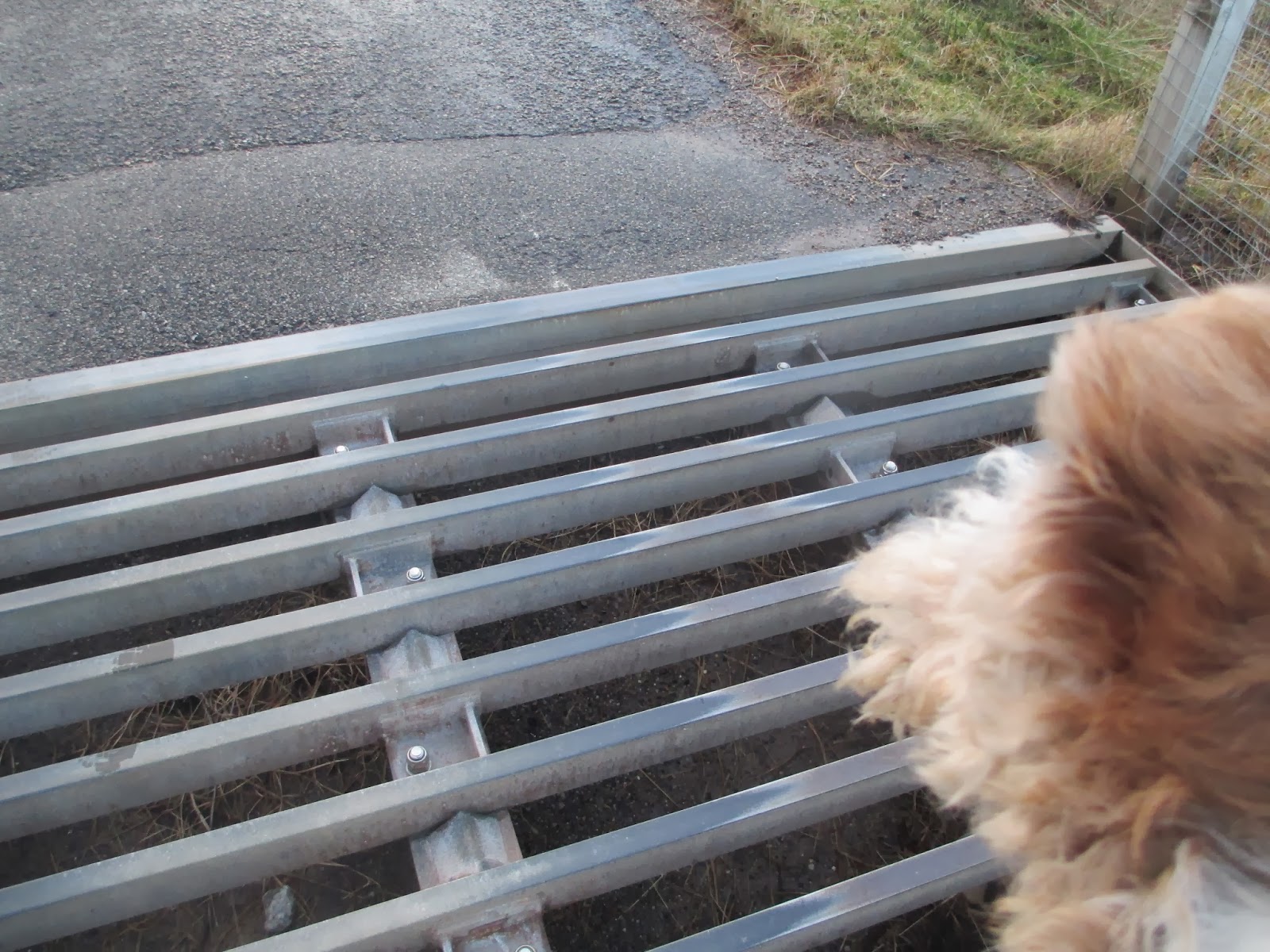 On Westminster winner Sky (and why my heart belongs to Addi)

Several friends have brought to my attention the fact that a wire-haired fox terrier named Sky was Best in Show at the Westminster dog show (the USA's version of Crufts) this year.

We can all agree she is a spectacular looking wee lass. 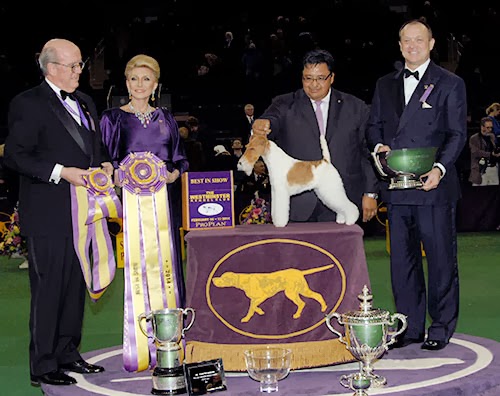 Now I have been feeling a bit upset that Gail vetoed my getting involved with all the Valentine's Day business this year, with that lame "too busy at work" excuse with which many of us are so familiar.

Long time readers will know that my special sweetheart is Addi from Illinois. The most beautiful big-boned American Bulldog you ever could meet. 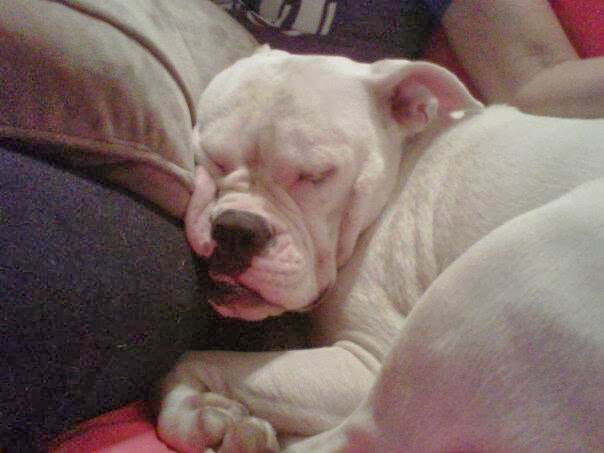 Addi, I want you to know that you are still the tops. 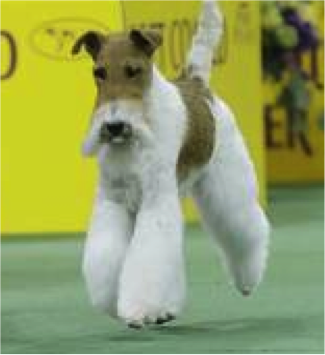 Not for me a girl with candy floss for legs.

Can you imagine a date with Sky?

"Ew no Bertie, I cannot come with you for a rampage across a Highland bog. I need at least four more hours on the grooming table before I could possibly show my face to the world. And by the way, were you aware that the set and shape of your tail does not conform to the breed standard? Please run along and fetch my nail varnish. And I suppose you think that's funny, offering me a lift in a tank..." 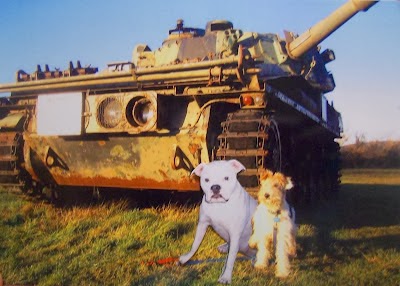 So we were at another Agility Show last weekend, this time in Broughty Ferry, near Dundee. In between my first round (for which I scored an 'E', which stands for Excellent I believe) and my second round, (where Gail says I would have won my class had I been just a little more patient and not bounced off the see-saw prematurely) we visited Jim's* catering van, and witnessed the following scene:

Morag and Edie are evaluating the menu.

"Aye, it's awa' roond the back. Just bide there a wee while Morag."

Jim disappears into the rear of the truck while Morag and Edie continue talking.

"It's a sort of processed sausage. My granny used to make us polony sandwiches when I was a child. I haven't seen it for decades."

Jim returns with some pinkish rounds of meat, to which Edie responds:

Jim comes over all Monty Python.

"Did you know that spam is a mainstay of South Korean cuisine?"**

She is met with polite but bemused smiles, orders a bacon roll, and leads me away.

You know, I wouldn't have minded trying some of that polony.


*All names except Gail's are fictional.
**We are indebted to our friends at Retro Rover for this fascinating piece of information! 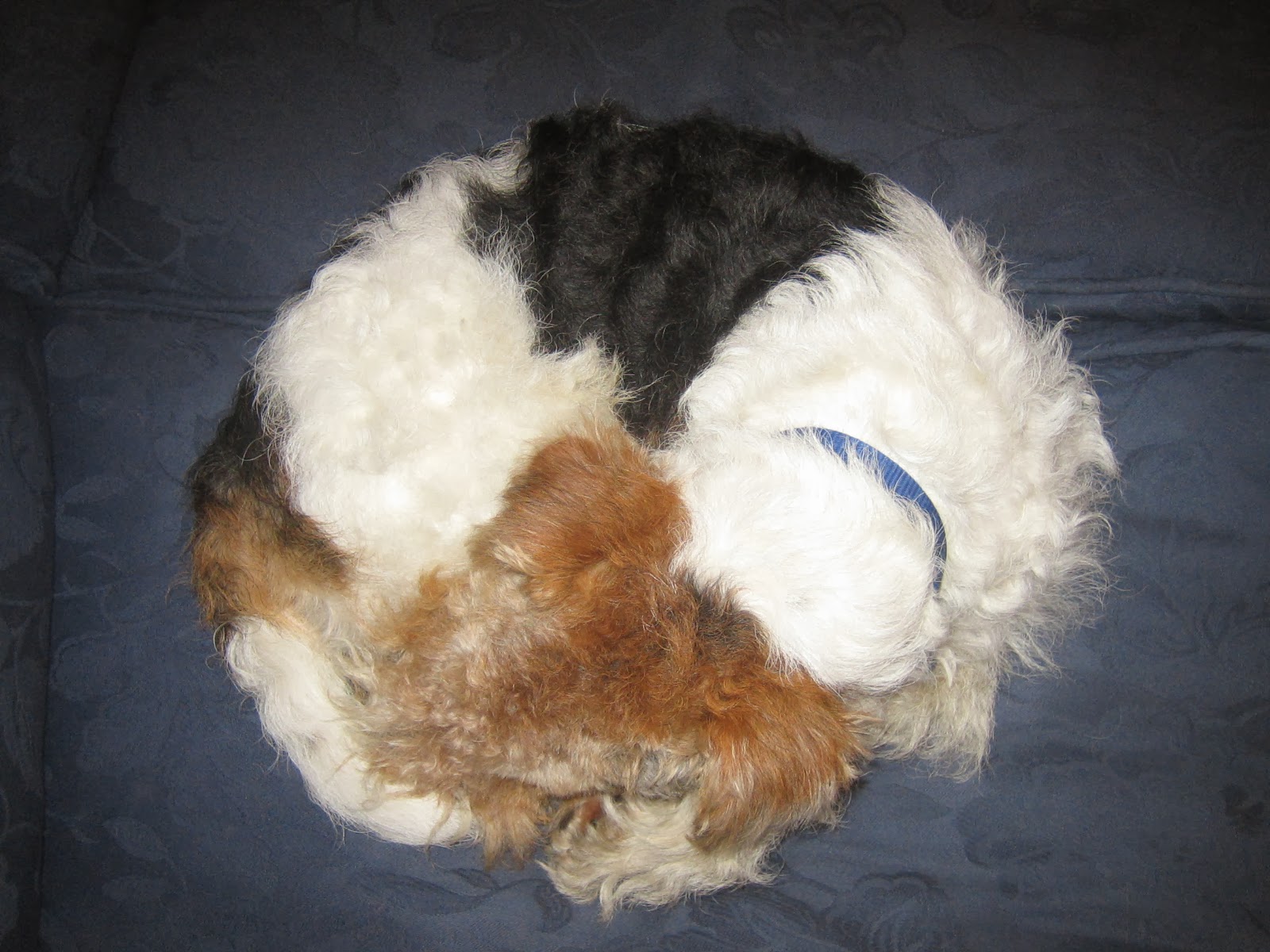 Bertie limbers up for his favourite Winter Olympics event.

What's wrong with my bark? PLUS BONUS VIDEO!

At agility training, the humans will always chat amongst themselves between turns, but I've noticed they are much less keen on us pups doing the same.

Most of the club members have owned more dogs than there are dalmatians in that famous film, so Gail, who has only ever lived with Hamish and me, often tries to tap into their experience.

On Tuesday night, while I was conversing with Willow Border Collie, I overheard Gail asking this:

"Do you think dogs' barks get deeper with age, like human voices? I certainly hope so."

I don't think I am being oversensitive in detecting a note of criticism here.

Phrases like "ear-splitting", "unbelievably piercing", "shrill and grating" and "setting one's teeth on edge" have, within range of my flappy little ears, been used before by Gail to describe my dulcet tones.

You know what? In my not so humble opinion, it takes one to know one.

And anyone who heard Gail sing along with 'Swing Low Sweet Chariot' while the rugby was on TV yesterday (actually, a flat croak would be a more accurate description) will call to mind that proverb about glass houses and stones…

My rendition of 'Flower of Scotland' was of course pitch perfect, although Gail exaggerated when when she said it was probably audible at Murrayfield.

OK, so you can now judge for yourself who has the worse voice….

Gail promised me we'd find some snow on our Sunday walk at Glen Tanar.

Things didn't look too promising at the Visitor Centre. 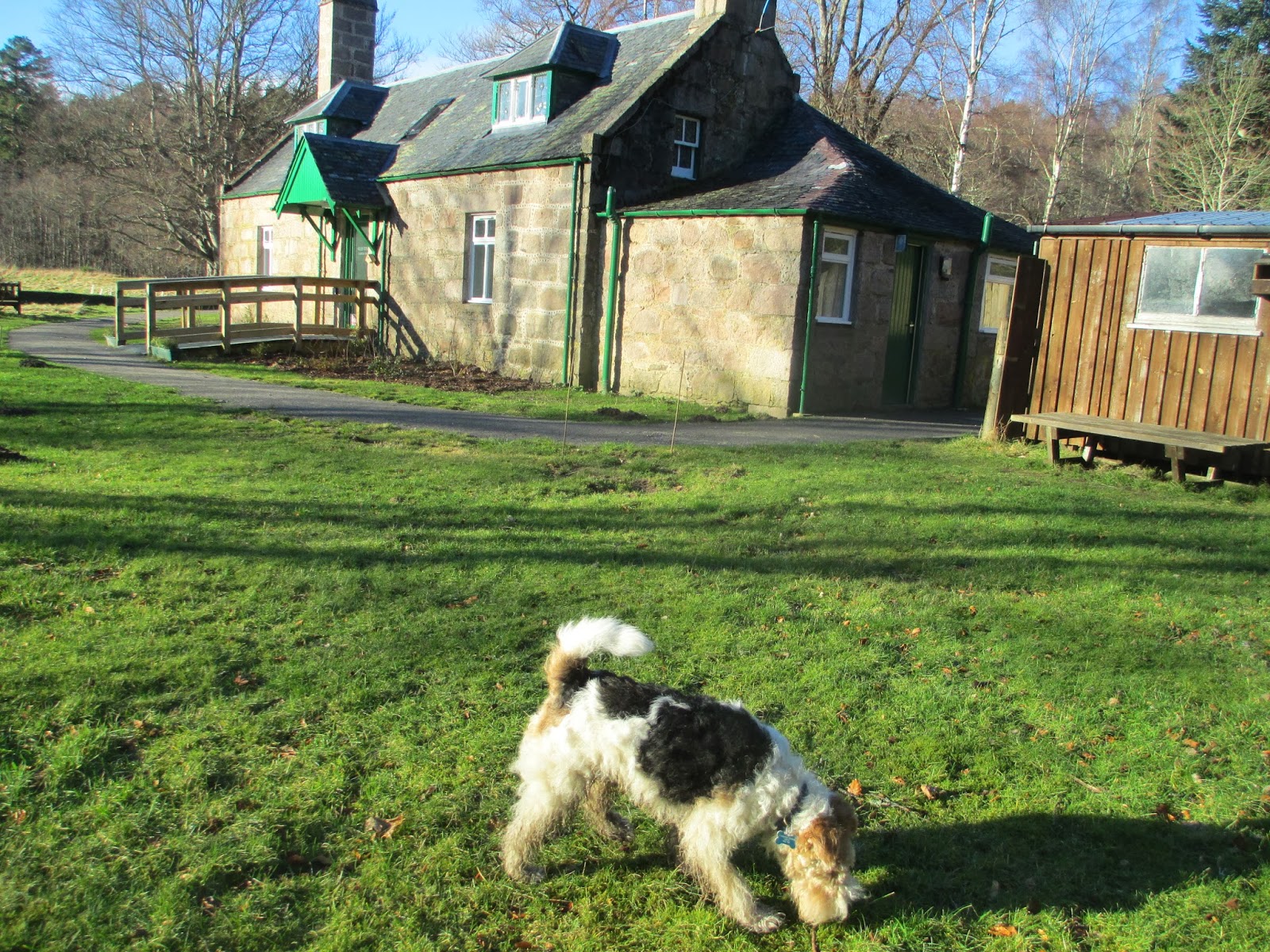 And those hills covered in white looked very far off. 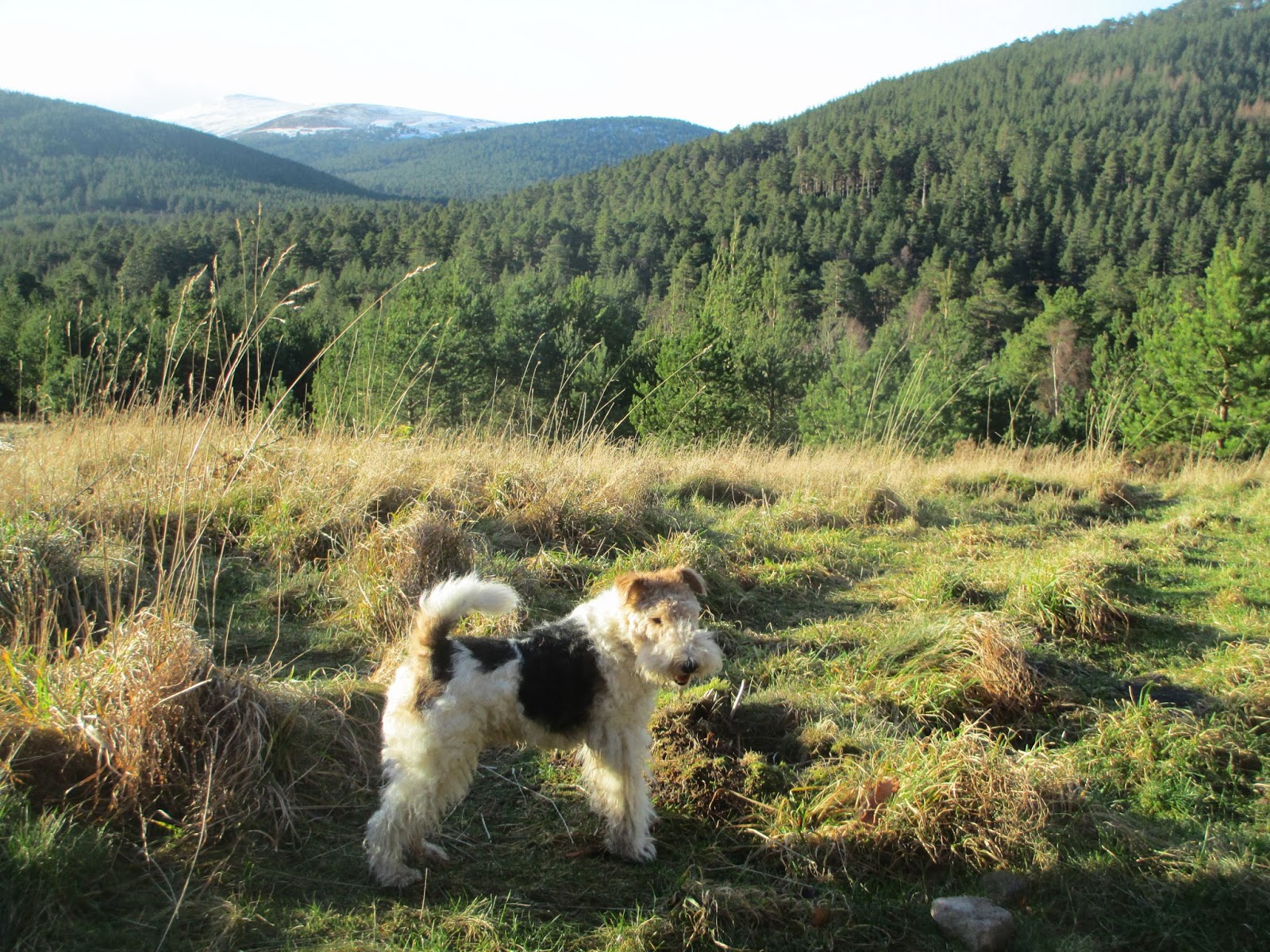 So we trudged through an awful lot of this… 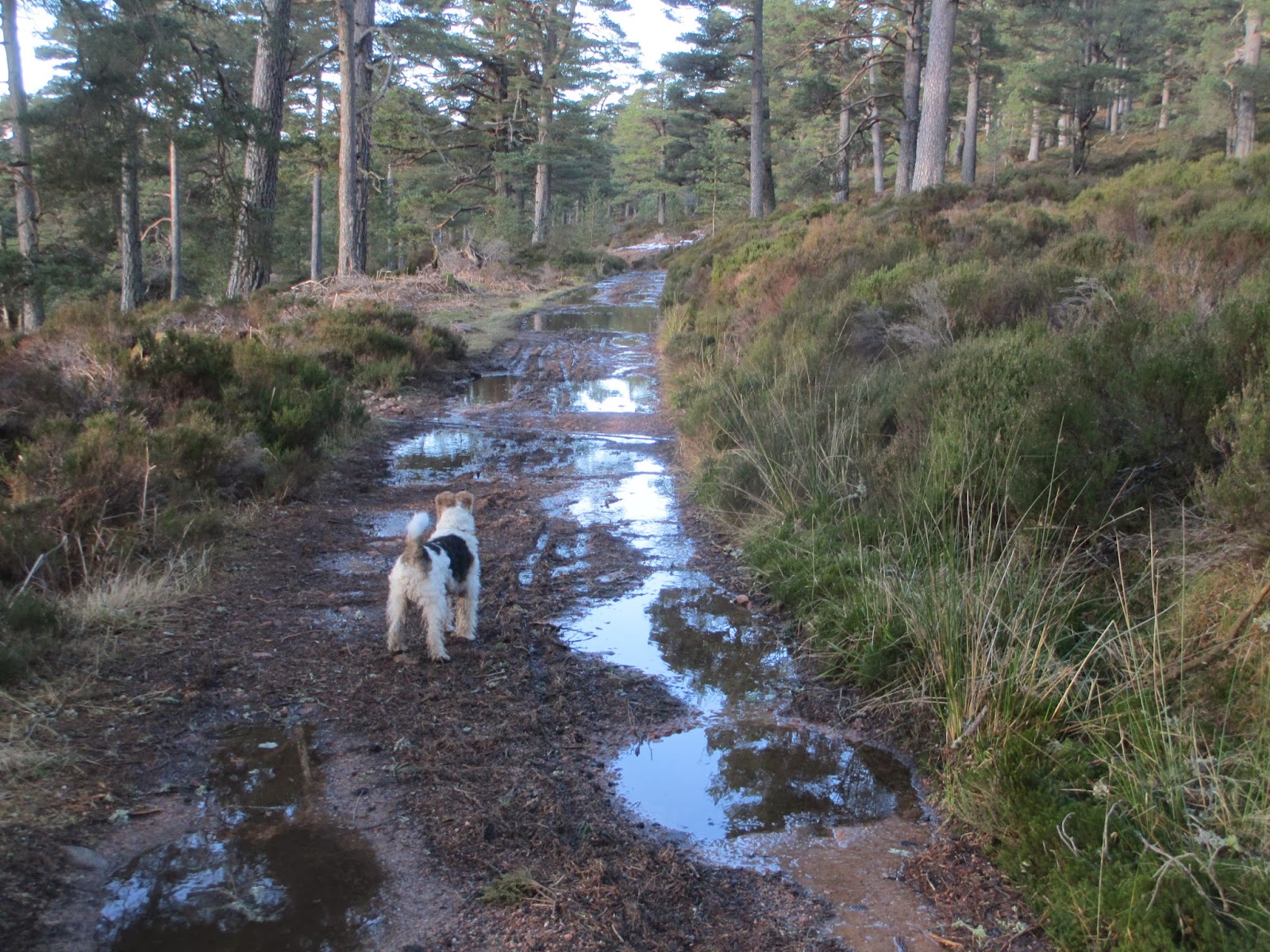 Before eventually coming across a small patch of this… 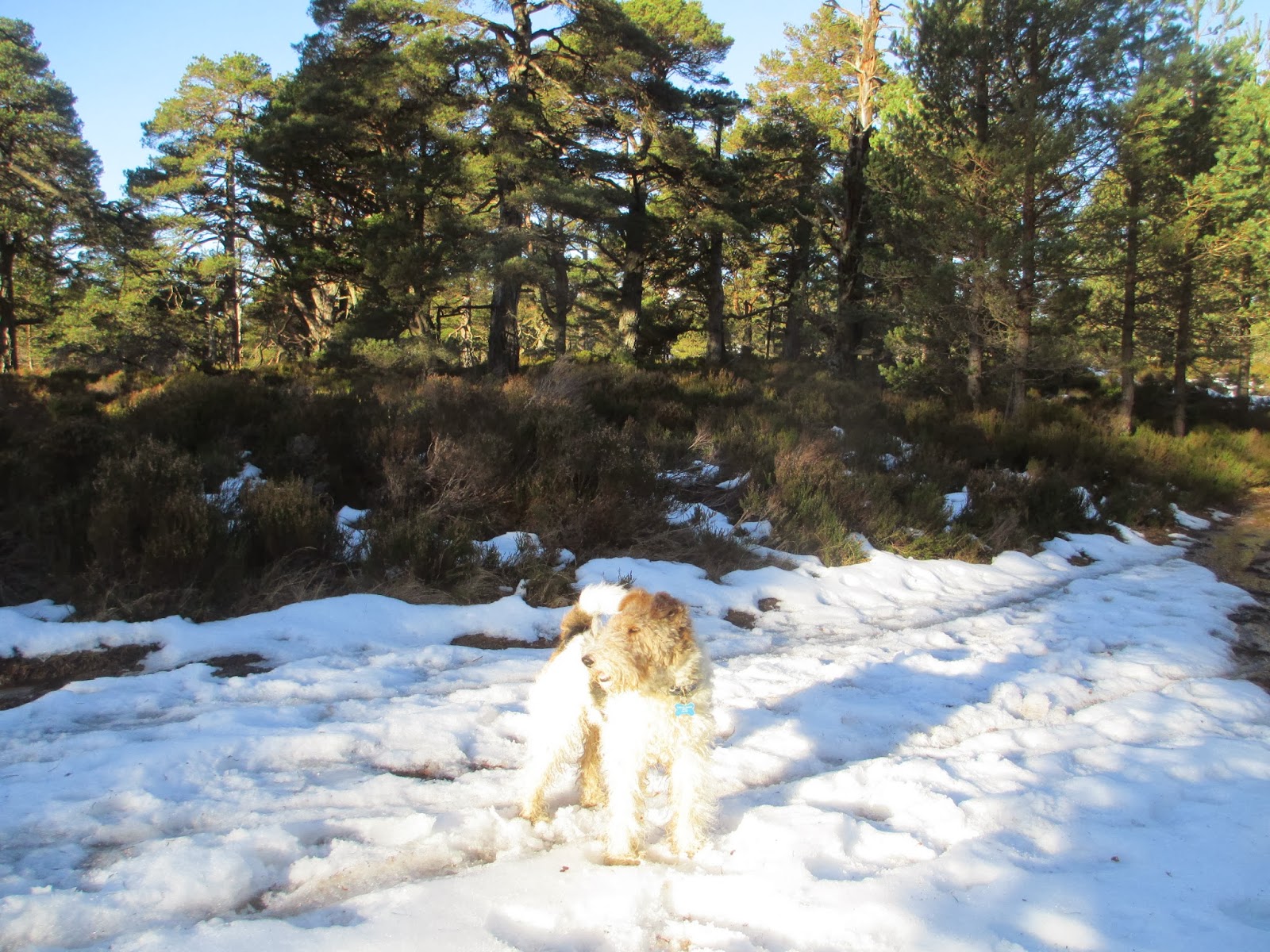 Then it was a long walk back through more of this... 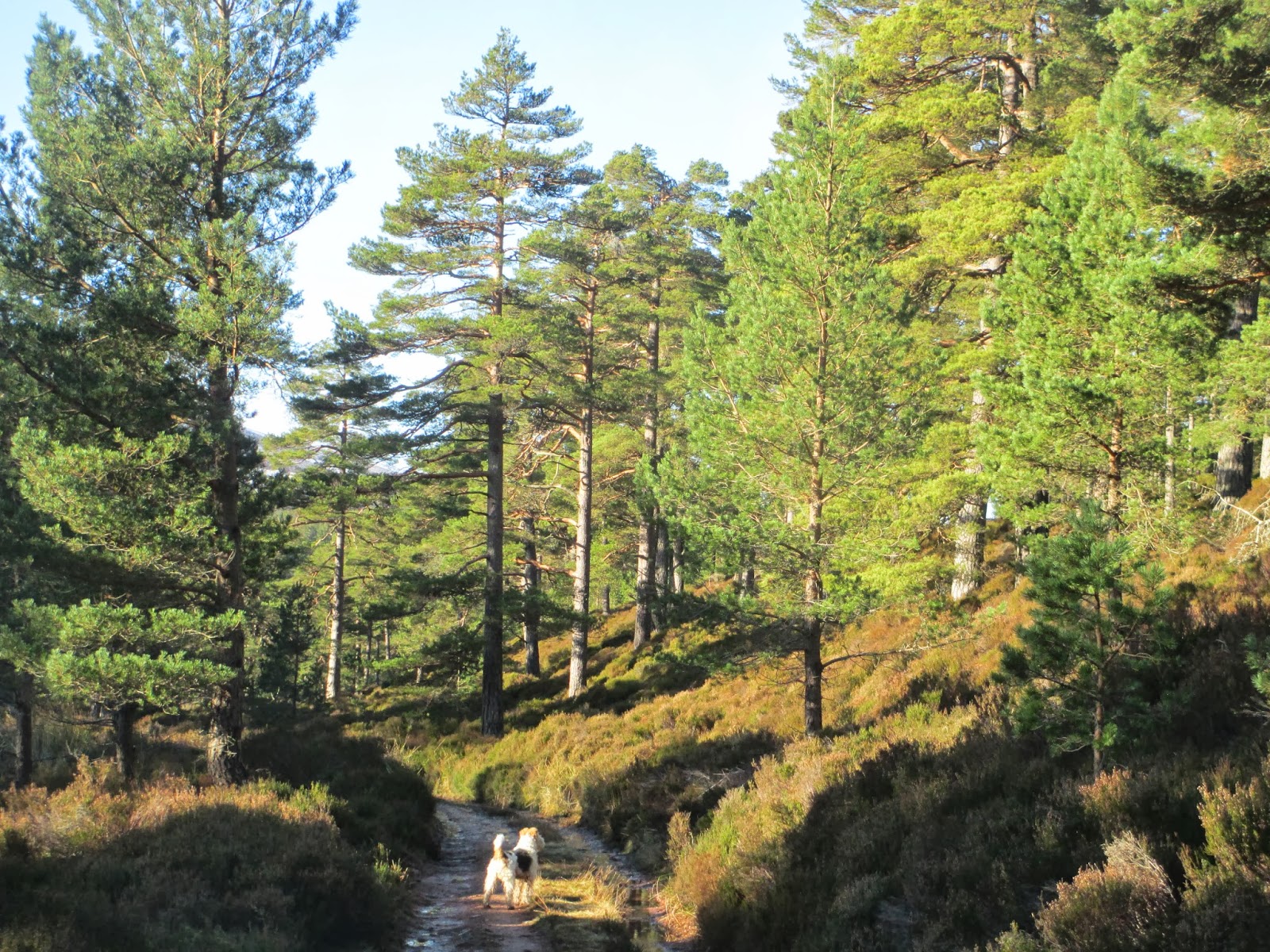 And finally, after ten mostly muddy miles, I got dumped in this…. 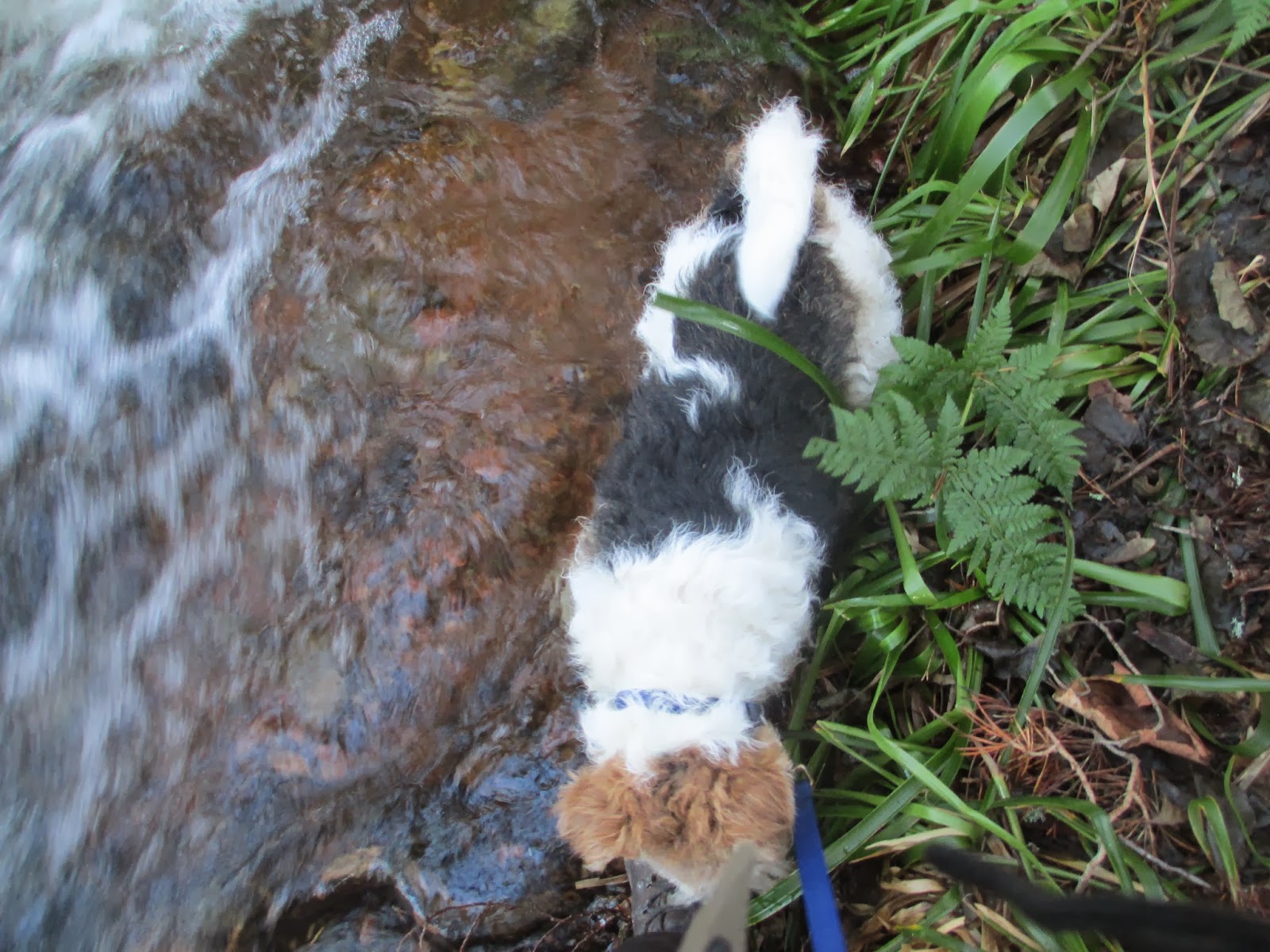 Proudly Independent or Better Together? 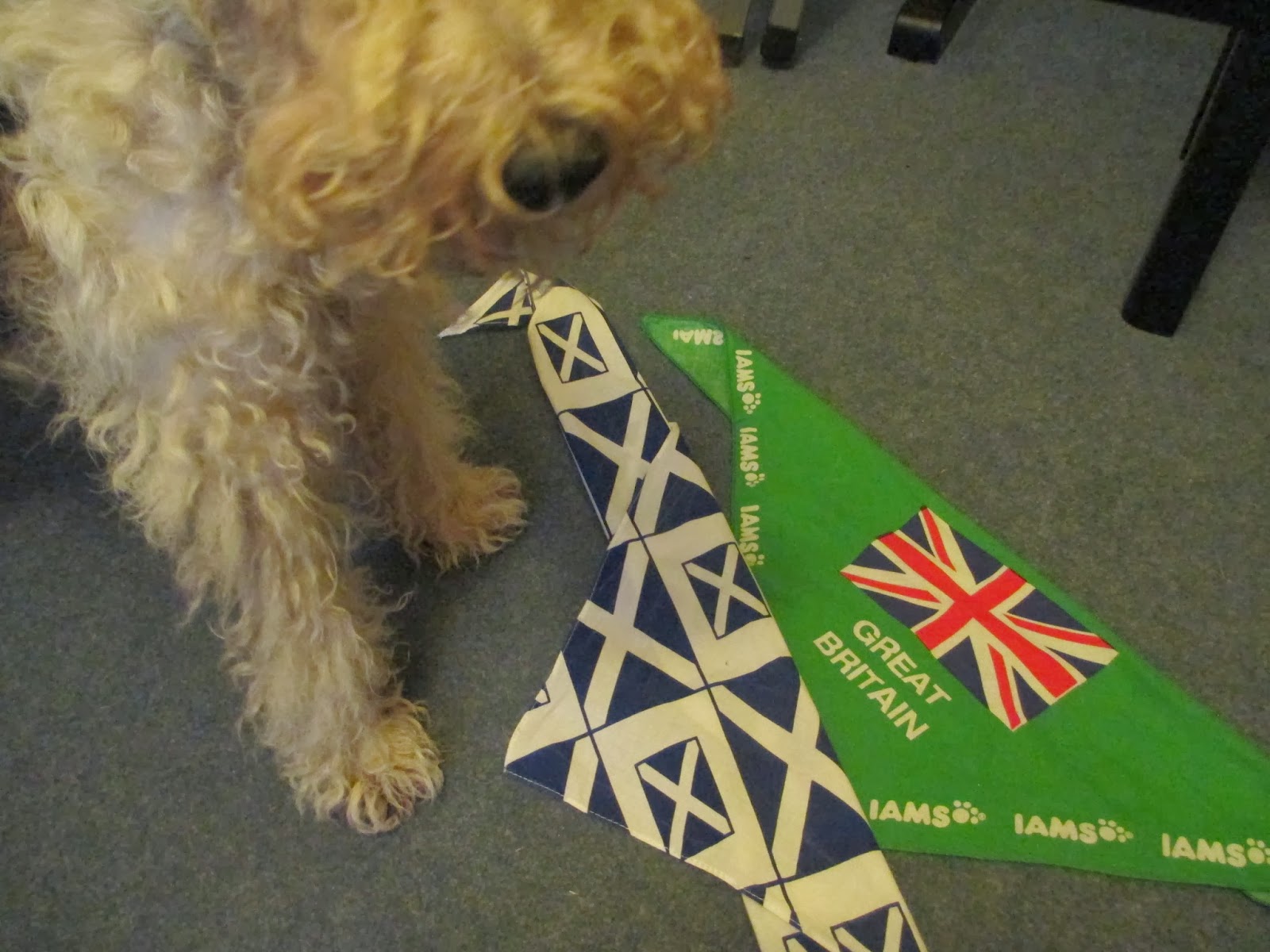 Now it may just have escaped the attention of some of my far flung readers that there is a going to be a referendum in Scotland later this year. On the 18th of September, to be precise. The question is:

"Should Scotland be an independent country?"

Well I'm sure you are longing to hear my thoughts.

Gail is warning me not to put my paw in it here.  Some neighbours who were previously good friends with each other have already fallen out over this contentious and emotive issue.

Of course, being a terrier, I am by nature attracted to the notion of independence. But then I am remembering Human Granny and Grandad down in England and I don't at all like to think they could become foreigners. And, you know what, we already have different laws about dogs in Scotland anyway (absolutely no tail docking, even of working dogs, for example).

Oh it is all very difficult.

I wonder which bandana suits me best? 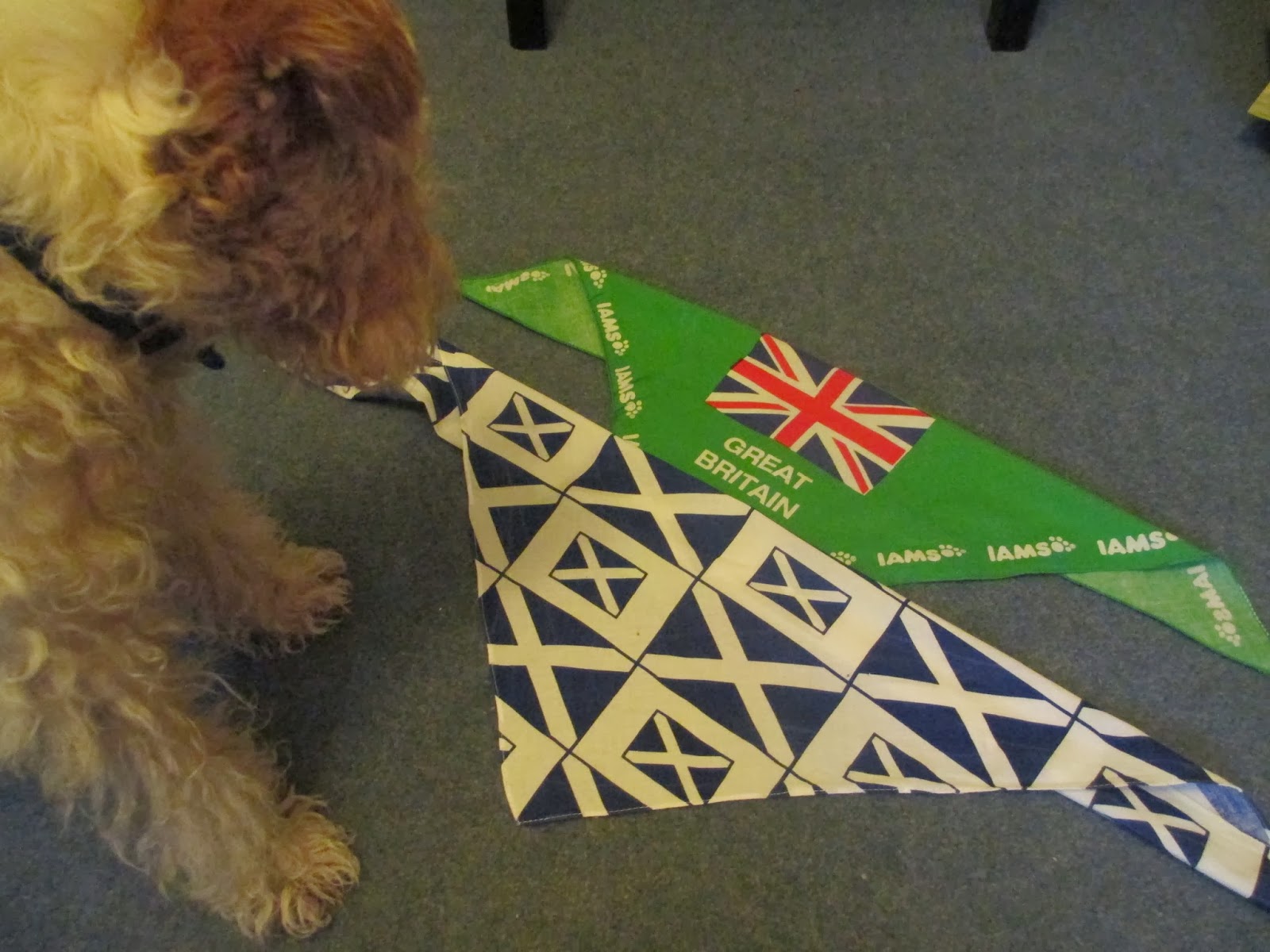 And now Gail is saying it's all irrelevant 'cos dogs don't get to decide. Surely that can't be right? I mean I know for a fact that human sixteen year olds will be eligible to vote in the referendum, and I am most definitely more sensible and have better judgement than the average bipedal teenager… 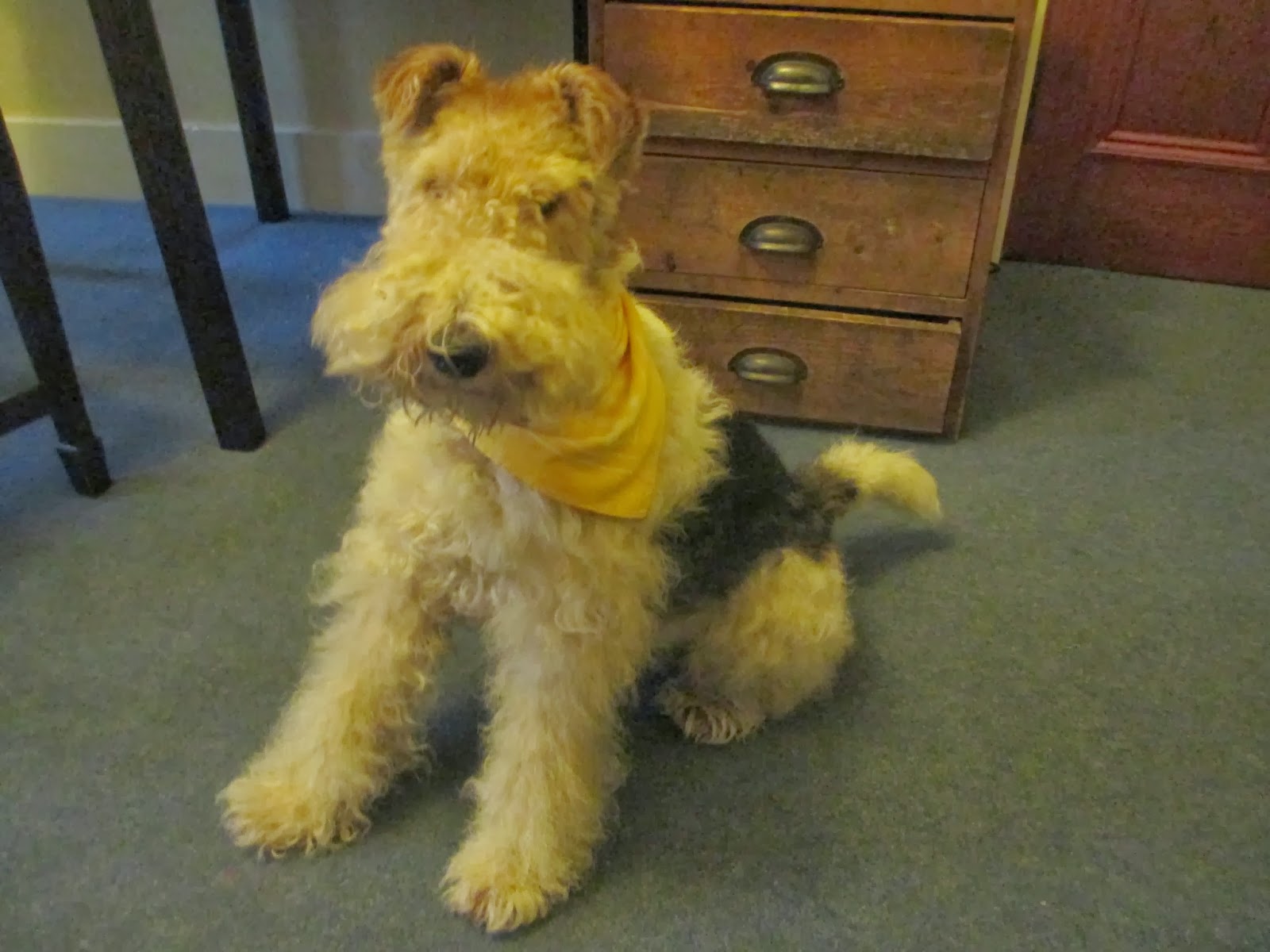 I may return to this important topic in due course …