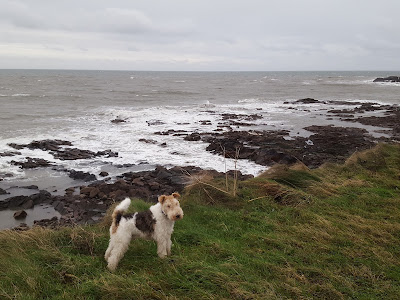 Just because it's been raining cats and humans* all week, and the wind has been working hard to prove it's worth as mainstay of Scotland's renewable energy resource, and it's the time of year when on a dull day the risen sun barely makes an impact on the light levels, does that mean you get spend all day lounging around on the sofa when you live with my owner Gail?

Of course you don't.

In this not very religious household, it is an article of faith that, whatever the conditions outside, one must on a regular basis go for a walk to "blow away the cobwebs".

Have you ever been troubled by cobwebs gathering on your furs?

But still Gail deemed it necessary that yesterday afternoon we should join neighbours Kirsty and Susanna for a stroll down to the headland at the mouth of Aberdeen harbour. That's about two miles from our street. I would like to point out that any stray cobweb which might have had the temerity to come along for the ride has probably been blown all the way across the North Sea and reached Norway by now! 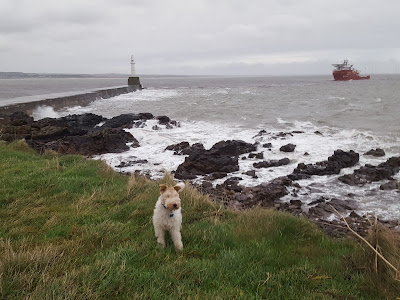 *Makes as much sense as 'raining cats and dogs', right?