Bertie versus the Wii... 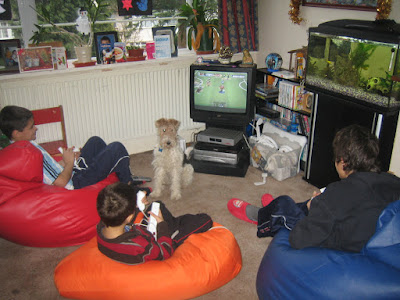 You’ll never guess what I’m being blamed for now. Just because a certain person is a very bad loser.

Let me explain.
Down in England last week, we paid a post-Christmas visit to one of Gail’s godsons.  Look, here he is, Daniel, the handsome chappie in the Argentina football shirt. 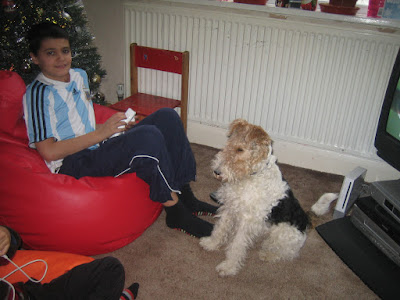 No soon as we’d entered the front door, than Daniel challenged Gail to a game of football on his new Wii computer thingy.
I don’t suppose it will come as a big surprise to you that my dear lady owner has hitherto not devoted too much time and effort to developing her expertise in this area. Unlike her twelve year old godson….
Now I will admit that this was my first opportunity to see a Wii in action too, but, in contrast to Gail, I naturally cottoned on pretty fast. As I see it, the game involves the humans waving their arms a lot, often very rapidly, to test whether the nearby terrier can either (1) grasp the moving human hand in his mouth or (2) take advantage of the fact that the humans are otherwise occupied and the field is wide open for toe chewing or ankle nibbling.
So by my criteria, I totally wiped the floor with the opposition.
Daniel's version is that he won ten-nil.
And incredibly, Gail had the cheek to suggest her poor performance was due to being distracted by my embarking on a limb-grabbing rampage mid-way through the game…
Yeah, right Gail. Like you weren’t already eight-nil down when I first sprung into action.
Posted by Bouncing Bertie at 13:12