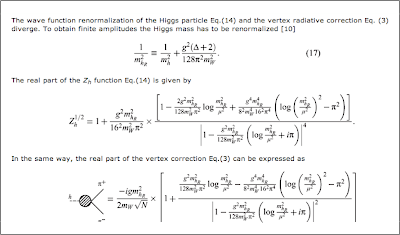 I know you will all have been thinking "I wonder when Bertie is going to get back to blogging about challenging scientific subjects. He really has been slacking lately".

Fear not, dear readers. I promised before Christmas that I would turn my attention to the Higgs boson, and I am not one to renege on my promises.

Now I suspect that many of my friends, both canine and human, will have made some sort of a New Year resolution which involves trying to lose weight, am I right?

(Please bear with me, I am not going off track).

The thing is, with the thrilling recent announcement from CERN that, following painstaking analysis of high energy proton collisions in the Large Hadron Collider, this elusive missing elementary particle has possibly been spotted, I am increasingly confident that I shall soon be in a position to patent my new invention, the Higgs Boson Diet.

I hope you won't think I'm insulting your intelligence by reminding you that the Higgs boson is the particle that imparts mass to all other particles.

So, the way I see it, if you can rid your body of a few stray Higgs bosons, then you have a pain free way of losing weight which involves absolutely no cutting back on treats, cookies, bones, or whatever.


Up until now, the stumbling block has always been that it is hard to get rid of something that no-one has ever been able to detect.

I expect you are now beginning to understand why the imminent discovery of this boson, the existence of which was predicted by Prof. Peter Higgs of Edinburgh University, Scotland in 1964, is causing such a wave of excitement in the physics community.
My own ingenious idea is that if you just hang around inside the Large Hadron Collider whilst all those protons are whizzing by at 99.9999991% of the speed of light (remembering to wear a jacket 'cos it's -271.3ºC in there) then there's every chance that a passing proton will bash into and annihilate a few of your very own personal Higgs bosons and, as if by magic, the pounds or kilograms will dissolve away in the time it takes to say "particle accelerator".

Oh what now?  Gail is saying that she's thinks I might need to check my calculations as she's worried you might be losing mass but not volume.....

Really, geniuses don't want to be bothered by such petty details.

And those equations do look awfully difficult. 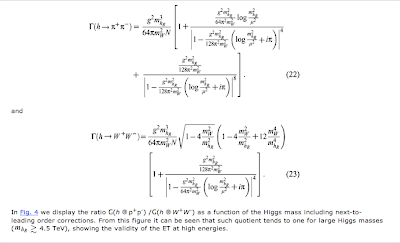