My kind of a day

So our wee poodle guest Ella woke me up early on Christmas morning and wanted to know what we'd be doing that day. 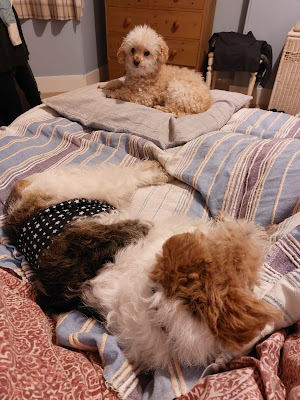 To be honest, I had no idea. But shortly after, when we were all up and about, I observed Gail filling the vacuum flask with coffee, tucking a few treats (dog and human) into her daypack along with her Bernie Sanders style mittens, and I whispered to Ella that I thought we might be going for a nice long walk and a picnic somewhere.
Soon we two dogs were bundled into the back of the car and were heading inland towards Aboyne. Ella, who has quite a good brain underneath all that adorable fluff, confided in me her worries that Gail had not packed enough food for the three of us, and this remained a concern until an hour later we arrived at the Glen Tanar car park.
There we found our friends M and J, and their friend K. To my great relief I saw that M had come equipped with all the makings of a feast, and these were being placed in the humans' various backpacks for, one presumed, later consumption.
Suitably equipped, we set off up the glen, Ella a bit nervous at first but soon getting into the spirit of things. 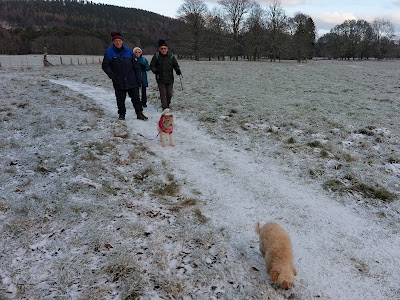 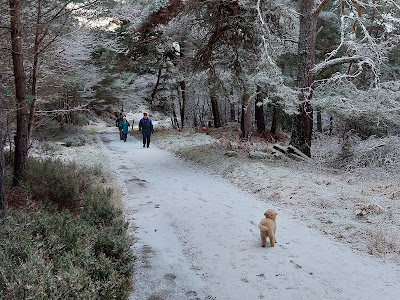 At -2ºC when we left the car park, it was slippery underfoot/paw, and chilly enough for me to be glad of my Nordic sweater. For brief moments the sun did peep over the sides of the valley. 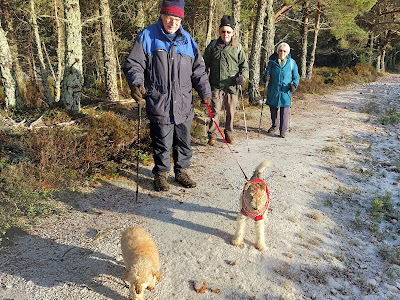 After a couple of miles we reached the picnic destination and the humans expressed relief that their favoured spot beneath the bridge had not already been taken. 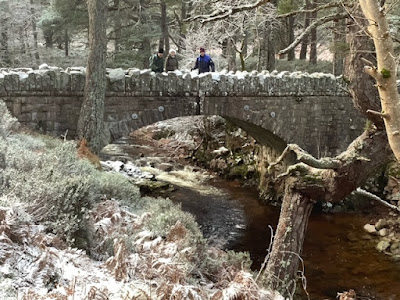 That this was a better class of picnic than the sort Gail usually puts together was evident from the moment M laid out a table cloth on the snow-covered stone bench. 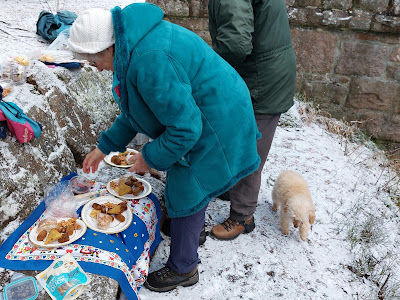 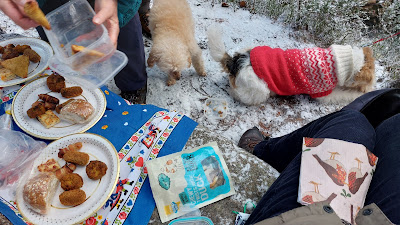 I was tied to a nearby tree trunk and given a top quality chew while the humans consumed their turkey sandwiches, tasty nibbles, tiramisu and 1/4 can each of naturally chilled Prosecco. I thought it a bit unfair that Ella was allowed to roam free during the picnic, and wasn't too happy when Gail said "it's because she has better manners than you do Bertie". 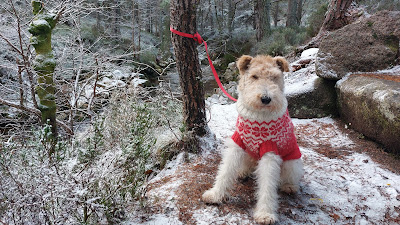 But then I remembered it is the season of goodwill. I decided to accept the situation and sat there quietly as the humans drank a toast to many more Merry Christmases (and I was given another treat...) 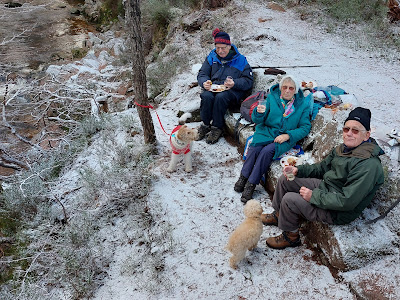