No dog is an island? Wrong! 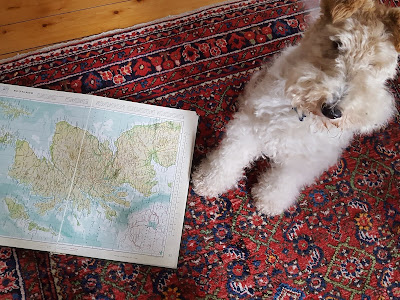 While Gail has been busy at work this week, I have been pondering the question of why so many of my fellow canines hereabouts are named after Scottish Islands.

The thought was prompted by a recent encounter with two pretty cocker spaniels named Skye and Iona. These are of course two rather famous islands, perhaps known even to some of my more far flung readers.

I have Vizla friend in Edinburgh called Harris, after that island of barren, austere beauty on the far northwest fringe of the UK, source of the famous tweed.

Nearer home in Aberdeen, we know of an Arran (Jack Russell terrier) and a Lewis (Lab). Yes you've guessed, both islands* too - look them up in the atlas!

A lady in Gail's book club who was raised on the Orkney archipelago (off the north coast of the Scotland) has a border collie called Rousay. This is one of the Orkneys and a great place to visit if you like archaeology and wind.

Not a million miles from Rousay, but closer to the Scottish mainland, you'll find on the map a wee islet called Stroma. I'll confess that the only thing Gail and I know about Stroma is that it's also the name of our next door neighbour spaniel.

When Gail eventually got home from work I asked her if she had ever considered giving me a Scottish island name.

On reflection, I am quite happy with my 'official' Kennel Club name, Granddach Beinn Alligin - more elevated to be identified with a mountain, don't you think? 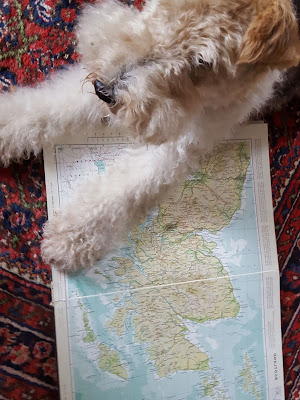 *Just to head off any geographical pedantry - Gail and I are well aware that Lewis and Harris comprise, respectively, the northern and southern parts of the same Outer Hebridean island...