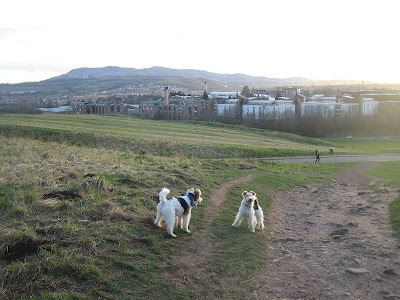 Oh I am so proud of myself.  It’s a wonderful feeling, to teach a young pup a valuable new skill. To play a part in educating him on how to be a ‘real dog’.
OK, let me backtrack.
A few of my blog friends will already have come across Horatio, a wiry pup in Edinburgh who belongs to Climbing Mandy and is just over one year my junior.
Well I am thrilled to report that yesterday I had the very great pleasure of meeting Horatio (and Mandy) in the flesh, when Gail and I stopped off in Edinburgh to change trains on our way back from a long weekend in Nottingham.
They came to meet us at the station. Horatio was looking most dapper, I must say, in his best blue bandana.
But you know what struck me right away about Horatio? That he is a feisty wee fellow. Yes really. Who’d have thought it? A wire-haired fox terrier?
So there was quite a bit of growling and snarling going on as we were led through the station concourse to Horatio’s car. A few tourists stared at us. Admiringly, I’m sure.
Once out of the car, off the lead and racing around the base of Arthur’s Seat, we started to make friends, in a boisterous fox terrier-ish sort of a way. 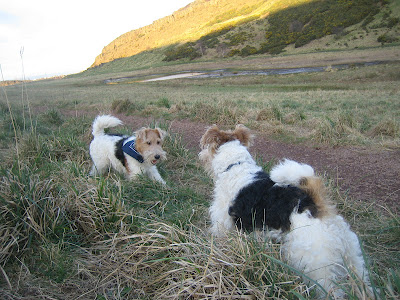 We put up a united front in the matter of refusing to pose unless treats were offered. 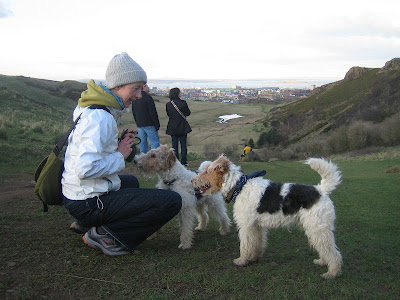 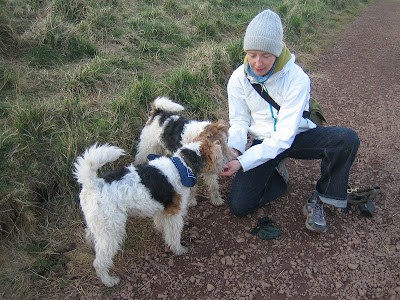 By Salisbury crags, we ganged up on a pair of Scotties. 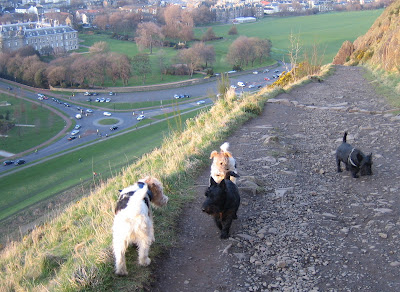 And overlooking the Scottish parliament building, we discussed important matters and agreed that we both supported the concept of independence…. 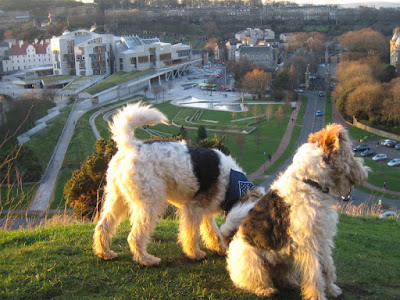 Now you know how it is when you are busy with your friends, your humans start gossiping about you, thinking you aren't listening, and sometimes they will reveal your quite intimate secrets?
So it was that I overheard Mandy say to Gail that Horatio doesn’t cock his leg yet.
And him nearly one! Well I have to say I was surprised, and so I took it upon myself to provide a demonstration of the appropriate position etc. Though I say so myself, my leg lifting action these days is performed with a balletic grace. Any pup would have been impressed.
And you know what? A few minutes later, tentatively of course, Horatio followed suit.
I can’t tell you how pleased I was. If only we had had more time, we could have covered the finer points of balance and increasing one’s accuracy of aim, and decisions regarding amounts to release or retain for future marking.
But sadly Gail and I had a train north to catch. 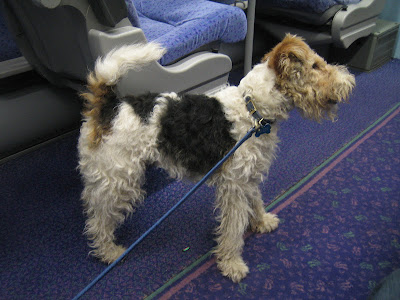 I keep asking Gail if I can email Horatio via Mandy to check that he still remembers what to do, and that he hasn’t fallen over yet, but I am told not to be ridiculous, they’ll think we both are barking…..
PS Just want to point out that I didn't neglect my duties in Nottingham either. Here I am making sure HGD sits down for a rest when we go out walking by the river Trent. 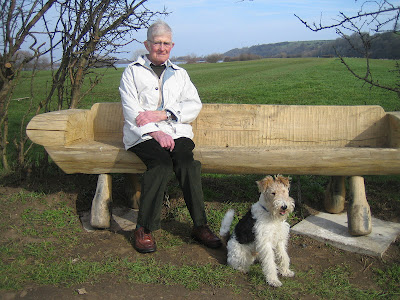