A visit to Union Terrace Gardens 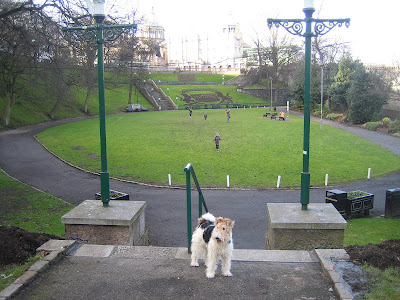 So. Back to reality, after my Valentine's escapade.

There is one almighty row going on in Aberdeen just now.

I think it's time I got involved. Be part of David Cameron's 'Big Society' and all that.  Not to mention there's nothing a terrier likes more than a good scrap.

It's all about this plan to redevelop a park running through a valley in the heart of the city. A local business magnate, Sir Ian Wood, has offered to fund about half of a £100 million transformation of Union Terrace Gardens into some swanky 'sculptured space' they're calling the Granite Web. (The City Council's to pay for the rest, with money it doesn't have.) The blurb from the architects talks about all these extra green areas they'll create, although what we see in their computer generated graphics is quite a lot of concrete.  We can only guess, from the enthusiastic support of builder of cheap and flimsy homes and ugly commercial buildings local property developer Stewart Milne, that other aspects of the plans are being kept under wraps for now. Oh and I have to tell you, when Gail read some claim that 6500 jobs would be created, I heard her muttering "I suppose they think we all believe in Father Christmas too...."

Anyway it's only a mile to walk to the Gardens from our home, so I persuaded Gail to take me there this afternoon so I could have a nose around myself.

And here we are. 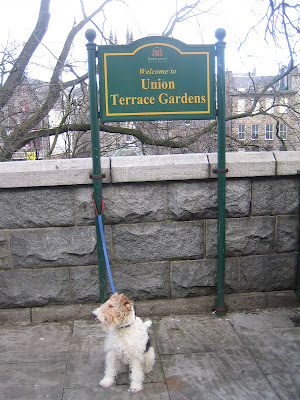 Well I can see that it is rather neglected. Look at the state of that pathway. 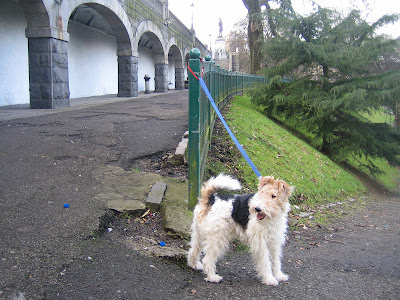 And while the facilities for dogs are acceptable, 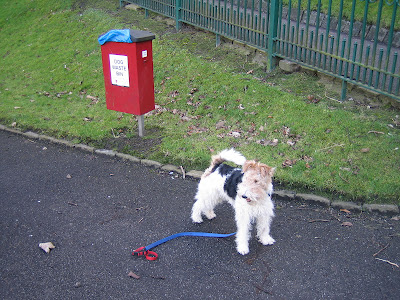 The ones for humans leave something to be desired.. 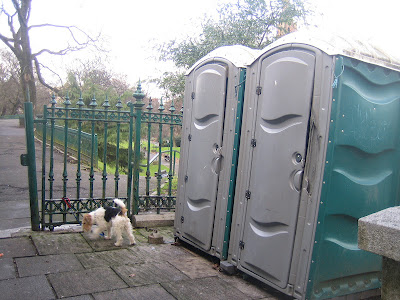 But all in all you know, it's a bonny wee park, with its own unique charm. Not at its best in February perhaps, but even without the flowers in bloom and the trees in leaf, it is a handsome prospect, looking up towards His Majesty's Theatre, is it not? 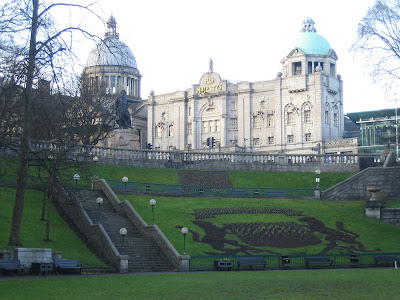 In fact, three imposing granite buildings, all in a row, adorn this part of town, and they are known locally as "Education, Salvation and Damnation". Yes, you've guessed it, the library, the church and the theatre. 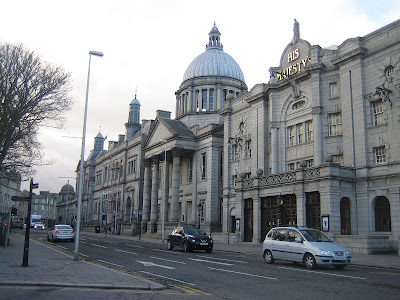 Standing guard over both the Gardens and the fine civic buildings, we find Braveheart himself, Sir William Wallace, who surely would be pleased to see that at least the railings under his statue are freshly painted. 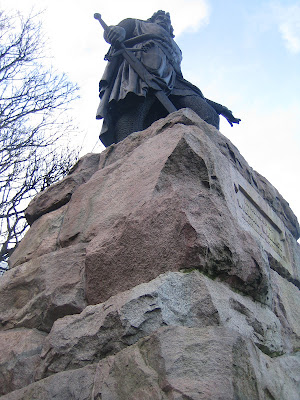 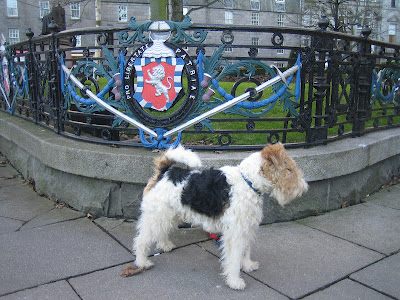 But perhaps he'd be less happy if he heard about the new scheme of things, whereby a firm of American architects seek to obliterate the distinctive character of the Aberdeen city centre....

I had a great time exploring Union Terrace Gardens today. So many splendid trees to sniff, places to run about, and no boring 'dogs mustn't do this and that' signs. Gail was looking a bit peckish after she'd finished taking all the photos for me, so I guess it would be nice if someone opened a cafe down here. And perhaps smartened the place up a bit in general, while preserving our precious heritage. It wouldn't cost too much, would it? Unlike the Granite Web. 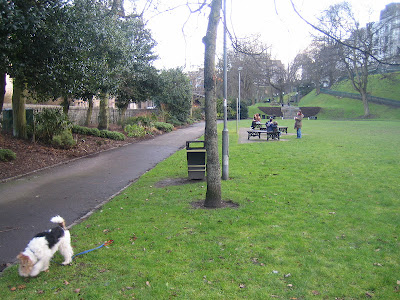 There will be a local referendum at the end of the month, asking residents whether or not they support the new development. I am sorry to say that dogs are not invited to take part. I am pretty sure I know which way Gail will be voting.
Posted by Bouncing Bertie at 06:00