Readers, thank you so much again for your enthusiastic participation in my readers' poll.
As you can see, your favourite for the mode of transportation to take Addy to the Valentine Party, just edging it over the Oil Man's Audi and the Tank, was ....
..... THE MAGIC CARPET.
Boy, have you left me with a dreadful dilemma.
Seriously, you are expecting Blogville's chief (all right, only) scientific advisor to travel to the party by Magic Carpet ???


You might as well have voted Richard Dawkins for Pope. (No Gail, I do not think that is an excessively grandiose analogy.)
As a dyed-in-the-wiry-coat rationalist, of course I do not believe in magic. Also, being a terrier, I am a bit fearful of water.  So I am most dreadfully anxious about the whole Magic Carpet thing, especially the Atlantic crossing part of the journey. Plus there is the issue, as my greyhound pal Deccy points out, that people will think I am on drugs.... Oh how I wish I had not, on a thoughtless whim, included this Magic Carpet as an option in the poll.
I would feel so much safer in a tank.
Gail is telling me it is all a good lesson in how democracy can sometimes produce an unsatisfactory result, after all the Italians did actually elect Silvio Berlusconi (more than once), and that I shall have to learn to live with the result.
Well I thought long and hard about what to do, and have decided on a compromise. A bit like our current UK coalition government in fact - after all who voted for that? I have modified the so-called 'magic' carpet by installing solar panels and these will power a small engine (discreetly installed on the underside of the rug) which should keep us aloft in case all the abracadabra business fails. I am sure that Addy, being a sensible lass, will appreciate my precautions.
I have done some very careful calculations, based on my in-depth knowledge of aerodynamics and an estimate of the weight of my 'traditionally built' lady (thank you Jed and Abby!) I am now confident that with my additions, the carpet can be trusted to relay both Addy and me safely to the Valentine Party on 14th February. 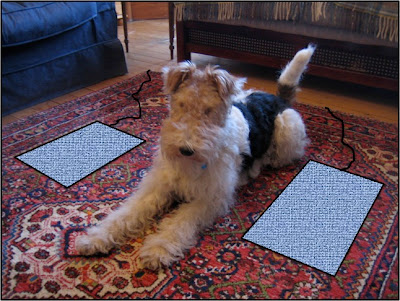 Although, being a belt and braces kind of a dog, I have made arrangements for the tank to be held in reserve, just in case...

Oh I am so excited!
P.S. A word about the poll: I would like to note that both Gail and I did spot an 'irregularity' in the voting pattern. Just who are all the folk that voted for the 'Oil Man's Audi'? Only one comment (Rottrover) actually voiced support for this vehicle yet it garnered close on a quarter of the votes cast in the poll. How could this be? Is it that fans of Audi TTs and personalised number plates prefer to keep quiet about their preferences for some reason...?
Posted by Bouncing Bertie at 20:57