Sometimes, posts on other dog blogs prompt Gail to tell me a story about my predecessor Hamish the Westie. So it was with Saturday's Rottrover post, in which Bart and Ruby's humans donated treats to the local dog rescue home, but decided they were not yet ready for a new pup. (In case you don't know them, I should explain that the Rottrover household recently lost one of their brave and much loved Rottweilers, Gizmo, to a nasty form of cancer).

Well Hamish, who also had a blog of course, was getting to be a very old chap by the winter of 2010. At the end of his post on Wednesday 17th February, he related how he'd collapsed on a freezing walk by the beach in Aberdeen and had to be carried back to the car. Gail has now filled me in with more details from that day.

Just before the walk they'd been to the big pet store to buy a new bag of kibble. Gail knew that her dear old Westie's health was failing, and the thought had even crossed her mind "is it worth buying him a large, 19kg bag? I'm not sure he'll last that long". She picked up a 5kg bag, then looked down at Hamish and his characterful, expressive face, and set the bag down again, feeling guilty, as if she had been about to break faith with her beloved first ever dog. She purchased the 19kg bag of 'senior' dog kibble after all.

Hamish only lasted one more day.

Two months later, I came to live with Gail and bring new joy to her heart.

Gail says she doesn't regret one penny she spent on that last bag of 'formulated for the senior dog' kibble.

And, phew, what a relief, she says she definitely doesn't regret that I came into her life so soon after she lost Hamish. Although she will now admit, there were moments when I was a troublesome wee pup (troublesome, me?), tearing noisily around the house and looking for more clothes to shred, when she would picture in her mind dear Hamish resting contentedly by her side on the sofa and wonder how well she and I would bond and if indeed she was the one who had bitten off more than they could chew. 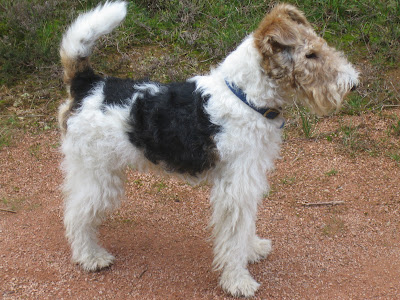