I inadvertently caused confusion amongst my non-British readers with Monday's post, in which I told of my extreme disappointment at being offered Hula Hoops to eat, when I had explicitly asked for salt marsh reared lamb from Marks and Spencer.
Who knew that 'Hula Hoops' (the foodstuff) were unique to the UK?  Is the rest of the world missing out?  I think not.

To plagiarise Wikipedia "Hula Hoops are a potato based snack, in the shape of short hollow cylinders". 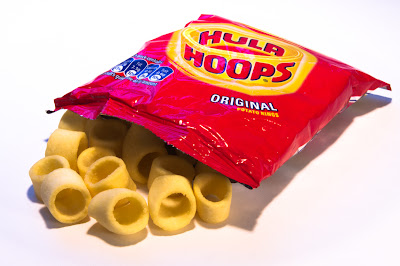 Whereas salt marsh lamb on the other paw.....

... would be well worth a wet walk to Marks and Spencer. 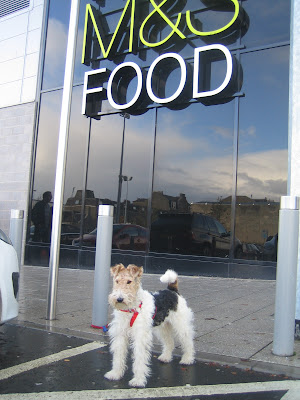 Oh. Sigh. If only I were allowed inside.

[Note from Gail: I have long observed that Bertie is a supermarket snob. He is in fact quite happy to be tied up outside M&S, and tolerably content waiting by the entrance to Sainsbury's or Tesco.  He barks his little head off if taken anywhere near an Asda*, and as for discount stores Lidl and Aldi, well I'm afraid we're in teeth baring and vicious snarling territory.  One day we'll make a pilgrimage to Waitrose in Edinburgh, to test the theory further.  I predict Bertie will be rolling on the pavement in ecstasy. (Apologies again to readers from outside the UK, but you're a smart bunch, I think you'll get the gist).]


Sadly, there was no sign of salt marsh reared lamb anywhere on the shelves of M&S this week. So we had to settle for the plain jane option instead: 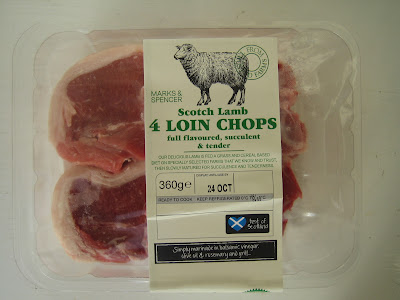 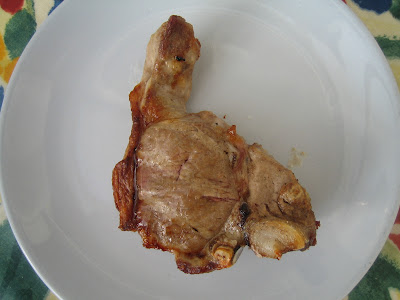 I am delighted to report that Gail came over all generous for once, and gave me a good sized portion. And that the Scotch lamb loin chop, "slowly matured for succulence and tenderness", was... 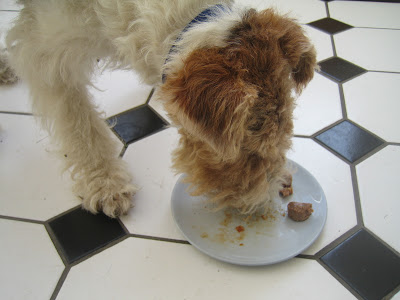 But I am still going to email Markies and ask when they'll have their salt marsh special in again.