Never let it be said that this blog is not a broad church. And no I am not going to discuss this week's Papal visit to Scotland; to paraphrase a certain well-known former Downing Street spin doctor, we don't 'do God' round here.

Instead, today I'm giving you a choice of two diverse topics on which to focus. I wonder what will capture your attention when you look at this photo? 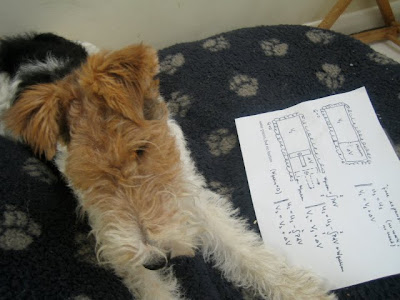 Those of you planning to attend the first of my lecture series (currently scheduled for Monday) will no doubt, like me, be very interested in studying the equations. Do biggify the picture if you need to....

Others, more concerned with appearances than with adiabatic gases, will perhaps be looking at my ears. Eric was asking about them just the other day.

You'll have noticed that, since the end of August, they are no longer glued. They are not as floppy as some WFT ears, but neither do they point to the heavens Andromeda Galaxy. Gail says she thinks 'they'll do' now as she's fed up of messing around with the Copydex. I tend to agree with her, although, to be honest, I never really minded them being stuck down.