Not doing so great...

Friends, I want you to know how it's going with me.
Well I'm still going, but things aren't so great.

It takes me longer than it used to, to squeeze out those last drops of pee. And that sometimes my front leg shakes a bit with the effort of it. (I'm still taking the Previcox tablets.)

Over the past few months my hearing has deteriorated, and what once was selective deafness is now involuntary.

Peripheral vision never really was my thing, and it certainly isn't these days.

I do believe I have a touch of arthritis in my right hip joint, but I still trot along on my walks (even quite long ones) happily, if a touch unevenly. Perhaps there's not so much bouncing as once was. And much more stopping to try to pee.

My appetite is just the same as ever, although I did have a bout of 'the runs' earlier this week.

But I feel a little vulnerable now, and like to spend more time cuddling close to Gail. 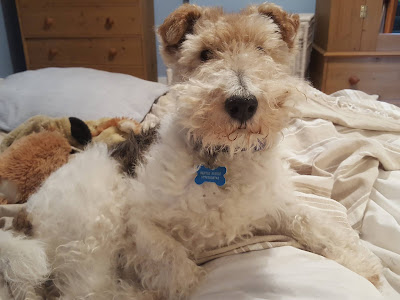 PS from Gail: The sad truth is that after several months in which Bertie's bladder cancer symptoms first eased (after being prescribed Previcox) and then stabilised, there's been a marked deterioration very recently. He's stopping ever more frequently on walks, seemingly to try to force out more pee and looking distinctly uncomfortable, and a noticeable amount of  blood has been appearing in his urine from time to time in the last week or so. I am taking Bertie to the vet later today.  I fear it might soon be time for a difficult decision.