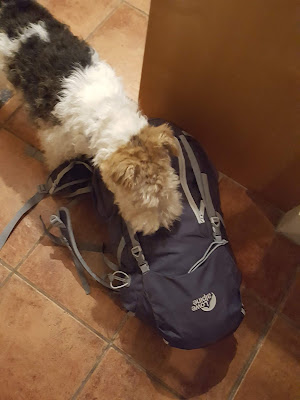 Dear Head of Recruitment at the TSA,

Re: Application to be a Sniffer Dog

Last week, my attention was caught by a newspaper article claiming that in the USA sniffer dogs with 'floppy ears' are being recruited for airport security because, unlike the traditional pointy eared German Shepherds and so forth, 'they don't scare the passengers'.

First, let me congratulate you on your commitment to diversity in your hiring practices.

However, I would like to point out that your otherwise estimable organisation appears to have neglected one important category of dog ear. As a (very adorable) wire fox terrier, my (impossibly cute) little ears are neither pointy nor floppy, rather they are flappy. The characteristic is seen to best advantage, and invariably draws admiring glances, in the course of my early morning trot around the park with my owner Gail.

Now Gail has often - especially after being confronted with a hefty bill from the vet - suggested that I might consider finding work and contributing to our household expenditure. Although to date I have been content with my lot as a 'kept' dog, I must say I am attracted by a job opportunity which would combine two of my greatest strengths, namely the ability to sniff with focus and intensity while also looking unbelievably endearing and unthreatening.

Lest you doubt the latter, I should also add that, on seeing my loveably fuzzy face, strangers often exclaim "ooh, he looks just like a teddy bear". And while I will admit that anyone who set me directly beside a teddy bear would surely notice significant differences, I think that in the world of sniffer dog customer relations, it is first impressions that count.

To the best of my knowledge, the only time my presence causes distress to young children is when they learn I am not available to be taken home and adopted by them.

I recognise that, in the way of human resources professionals everywhere, you will want evidence of relevant experience and expertise. Let me assure you that just over a week ago, when Gail returned from her Christmas vacation in Mexico, I inspected her luggage most thoroughly, and am relieved to report that the only drugs I detected were two Naproxen tablets, available over the counter in Mexico City  but only on prescription in this country.

I hope the fact that I currently hold a European Union passport will not count against me in this application. I think it is relevant that my owner once worked for two years in Oklahoma. (I trust that her failure to pay an Oklahoma State income tax demand for $2.63 which arrived some months after she returned to England will not disbar me being considered for a sniffer dog position.)

Assuming that my application is successful, might I state a preference for working somewhere in the Seattle area, where I believe the climate would be congenial to one accustomed to British weather, and where Gail says she would happily accompany me.

I look forward to hearing from you as soon as your current government shutdown allows... 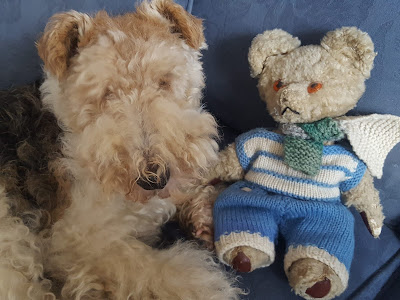