Hmmm. It's hard for those of us who live in the UK to avoid the dread topic of 'Brexit' altogether, much though many of us would like to.

First let me belatedly congratulate my fox terrier brethren, pictured below, who took centre stage at a special canine anti-Brexit rally in the autumn last year. Well done my friends - I'm proud of you! 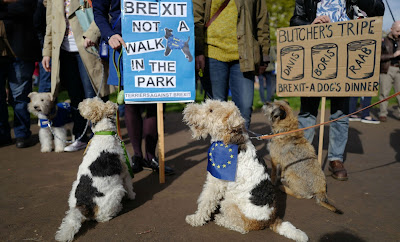 You will have noticed that one of the posters in the photo refers to Brexit as a 'dog's dinner'. Many a commentator over here has made use of the same phrase, or the morning time equivalent, 'dog's breakfast'.

While I understand that this is meant to imply that the whole Brexit business has become one colossal mess (which is undoubtedly true), please forgive me for being a tad pedantic here and regretting the implied slur on the eating habits of my species.

I for one believe that my customary dinner, which consists of kibble with maybe an add-in of 'Butcher's Tripe' for taste, should in no way be used as a metaphor for disorder and confusion.

In fact, I would suggest we might rather look at a certain human's eating habits in this context.

I guess the problem is that describing Brexit as: "A single woman's dinner after a busy day at work, resulting from her googling the random (and probably past their use-by date) contents of her fridge plus the word 'recipe', and conjuring up some bizarre concoction of dubious nutritional value", does not neatly fit into the space allowed for the typical newspaper headline....

If only we could all just agree to 'Remain'... 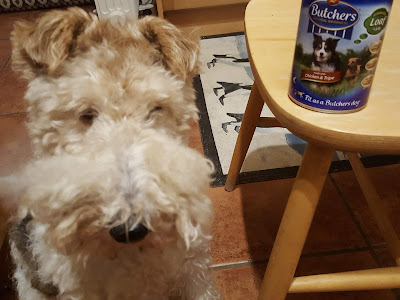