They do things differently in Edinburgh...

It is possible that life in our capital city Edinburgh is not all that it's cracked up to be.

Initially I was quite envious of Labradoodle Lily, who belongs to one of Gail's book group friends, when I heard that she and her family are moving away from Aberdeen and going to live in a nice flat in Edinburgh New Town (that's 'new' as in only about 200 years old).

I looked on the map and saw that there is a lovely park, Queen Street Gardens, right by the flat. I even found a photo on the internet. 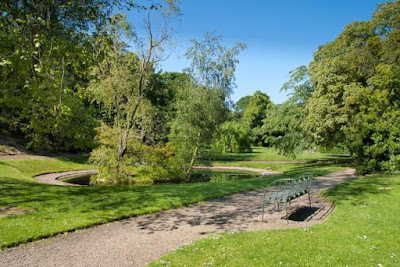 Won't that be a splendid place for Lily to run around in, I said to Gail.

But Gail responded that life for Lily in Edinburgh would not be so simple. First of all, access to the gardens is only open to a restricted number of local property owners, and there is a waiting list. Worse, there is a SEPARATE WAITING LIST FOR DOGS.

Gail went on to say that Lily would probably have to pass an exam before gaining a key to the park, demonstrating her knowledge of acceptable social behaviour in the Edinburgh canine context, and may be blackballed by 'The Committee' anyway on account of being a non-traditional breed (the horror!) who does not attend the right doggie creche or high end grooming parlour...

OK, I think Gail was kidding me about the exam business etc, possibly having read one too many of Alexander McCall Smith's 'Scotland Street' novels.

But I have decided anyway I am quite content with life in Aberdeen.
Posted by WFT Nobby at 06:00