It has been brought to my attention that this blog has been lacking in intellectual and scientific rigour of late, and so today I aim to redress the balance. In a suitably seasonal and dog relevant fashion, of course.

Maybe, like dear, clever YAM-Aunty, you already knew that today, 14th December, is considered as the 'Birthday of Quantum Physics'. It was on this day in 1900 when the German physicist Max Planck first proposed that energy emitted by a radiating system is not continuous but rather it comes in discrete packages, or 'quanta'.

I wonder also how many of you have received Christmas cards with pictures of robins this year? Perhaps you have had opportunity to bark at a robin, newly arrived in your garden after escaping the harsh Arctic winter? 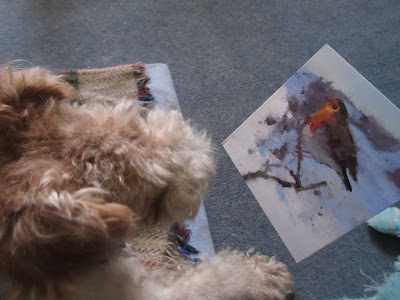 OK, so I realise some you are now thinking "Bertie Boffin, poor chap, has totally gone off his rocker this time. I'm afraid he has been imbibing too much 'festive spirit'. What on earth do migrating robins have to do with quantum physics?" 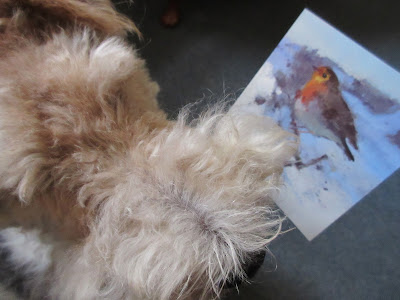 Now, since well before the days of satnav, scientists have been pondering the question of how birds navigate when they migrate long distances, especially across oceans where landmarks are few and far between. You might think this field of study would be the domain of the biologist, but in fact one answer came in recent years from some very clever experiments by physicists. These experiments led to an understanding of how the robin uses certain esoteric quantum effects to detect changes in the angle of the earth's magnetic field and thus to figure out which way is north*.

It all happens when a small package of light (a photon) reaches a special protein (cytochrome) found in the eye of the robin. The photon causes an electron to be expelled from the cytochrome. The hole is then filled with one of a quantum entangled electron pair such that a superposition of singlet/triplet states is created in the pair (yes, in the world of quantum physics, electrons can be 'superposed' in two states at the same time, with no problem at all - think of it like the state your human is in when you have done something bad, but also funny, and they are cross and laughing at the same time). Anyway the point is, that the laughing but also cross electron can easily tipped towards one or the other state, depending on the tilt of the earth's magnetic field, which is of course latitude sensitive. (In the same way that, if your human is still in the angry-but-amused state, and you tilt your head at a certain angle, this might impel your human to smile and forget all about shouting at you).

I am sure it is quite clear now, how robins find their way to your mantlepiece at Christmas, and so we would all like to say 'Happy Birthday' to quantum physics, and to salute the great founding fathers** of this weird and wonderful branch of science.
*Note we are talking about the European robin here, smaller and cuter the American so-called robin, which I believe is actually a thrush!

PS from Gail: this post was inspired the book 'Life on the Edge: The Coming of Age of Quantum Biology' by Jim Al-Khalili and Johnjoe Mcfadden. A recommended Christmas read for those who like their popular science to be a tiny bit challenging!