Fun in the Sun in Scotland. Yes Really. 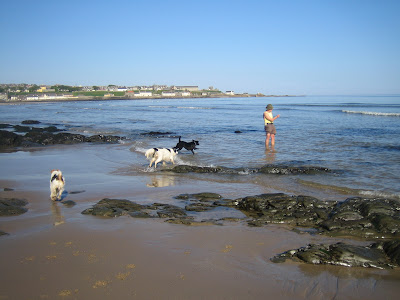 Gail says I owe you an apology for putting pictures of such unappealing humans on my last blog post, a shock perhaps when you normally expect to see cute little me and perhaps some of our lovely Scottish landscape.

Well today, and especially as it's Monday morning and you might need cheering up, I am going to redress the balance and show you photos of me out and about enjoying a rare (VERY rare) Scottish heatwave. It's been over 23ºC!

On Friday I went for a bicycle ride with neighbours Mike and Kirsty and their dogs Bonnie and Jack, and then later Gail and I travelled north to Macduff, right by the sea, to stay a night with Gail's friends Molly and Neil. I'm also showing you some photos of a sandcastle building contest on Banff beach, just by Macduff.  For some reason, I was made to stay in the house when this event was taking place, although Gail later reported that other dogs were present. SO unfair. Anyway, Molly's daughter Nancy and her friend Sorley won a box of chocolates for their magnificent effort, well deserved, as I'm sure you'll agree when you see the pictures.