Maybe some of you out there in the wider world are not aware of Aberdeen's reputation in Scotland.

Whereas in England they make jokes about all Scots being too careful with the pennies, north of the border, stinginess is a trait attributed in particular to the Aberdonians.

No dog would want a tight-fisted owner would they? I remember being a bit nervous when I was a tiny wee pup and was told I'd be going to live in the 'Granite City'. Would I ever be bought treats, I wondered? My mind was set at rest when I learned that my owner Gail was a migrant from England, presumably free from any genetic tendency to excessive frugality.

Events this week have forced me to conclude that environment trumps DNA.

Do you remember I mentioned in my last post that I was thinking of requesting a raincoat for Christmas?

No soon as I'd pressed the 'publish post' button, than Gail came bounding downstairs brandishing this... 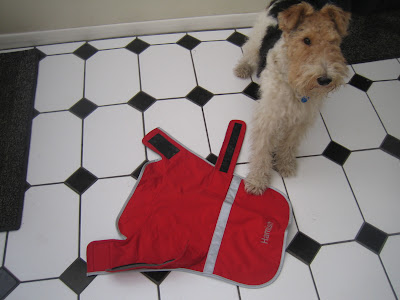 ...and saying "Bertie there's no need at all to go writing letters to Lapland. I have just the thing for you. Look, I bought this lovely red jacket for your predecessor Hamish two Christmases ago, but he only lived a few weeks after that so it's as good as new!"

Leaving aside the questionable taste issue of wearing a dead dog's clothes, I expect you, like me, have spotted another big flaw in Gail's proposal. 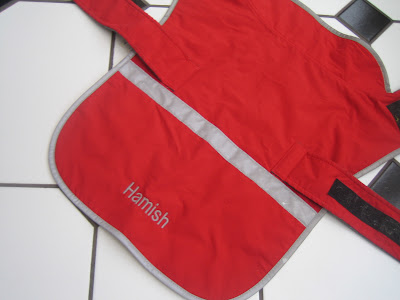 She can't possibly imagine that I'm going to parade around Aberdeen with 'Hamish' embroidered across my back, can she? (Fine old chap though I'm sure he was.)

My friends would be most confused, and might accuse me of disrespect.

"Oh but I've thought of that Bertie," said Gail, always the clever clogs. "I've been reading all about different uses of duck tape on Frankie Furter's blog this week and it gave me an idea".

Frankie, you might be Mayor of Blogville but you have much to answer for. 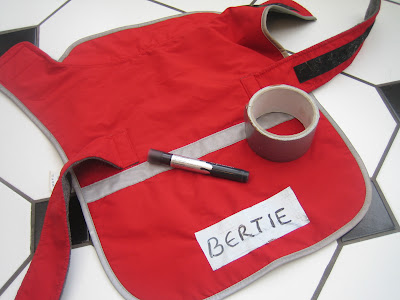 Can you believe anyone could be so cheap?

I am pleased to report that the story has a happy ending. I am at the skinnier end of the WFT spectrum, whereas those of you who knew Hamish will remember him as a solid, sturdy Westie.

So it turns out that the jacket is totally the wrong shape for me, especially around the neck area. And I know full well that Gail is useless at needlework so I think I'm safe after all. 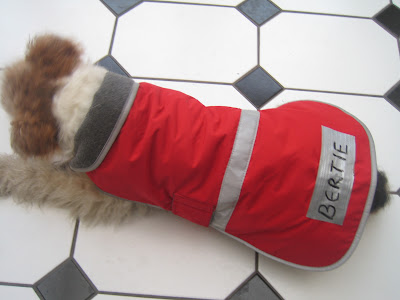 Can anyone recommend a WFT shaped coat? Stylish, hardwearing and waterproof, please.

PS. For the post in which Hamish proudly modelled his new red jacket click here.
Posted by WFT Nobby at 06:00