We venture even further into dangerous territory today....

You might remember that a couple of months ago I was most upset about a Royal Bank of Scotland advert which implied that us terriers did bad things like chewing up cards...

Well I am pleased to report that someone has take note of my objections and there is a new and much more satisfactory RBS advert out now. 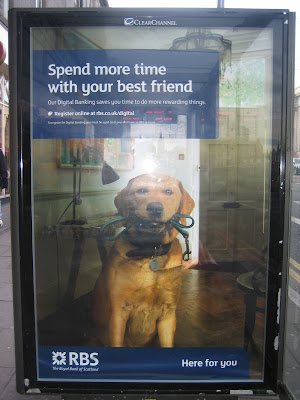 Golly gosh Gail isn't that a nice poster! Why don't you put some of our savings in that bank, after all they seem such a caring institution?

Oh dear, my innocent comment has elicited a stream of very rude words from Gail. How uncharacteristic.

Now that she's calmed down a bit I think I can decipher some of what she's trying to say.

She's spluttering on about the fact that she, the taxpayer, gave £37 billion to RBS a couple of years ago, so that they could keep on paying their senior staff huge boneses (?) and she doesn't feel like putting any more of her hard earned pennies their way just yet....

Well now let me see. There are about 10 million dogs in the UK. So if the government had given the £37 billion to dogs instead of bankers, that would be £3,700 per dog, which could be soundly invested in treats, days out and vet bills. Yes I am beginning to see Gail's point. It is a lot of money.

Apparently I'm taking a selfish view of matters and it is not the government's role to buy treats for pets, rather they could have used the money to pay more to humans who actually do useful jobs, like teachers and nurses and care workers.

But we dogs do valuable work too don't we, by providing entertainment, keeping our humans fit and spreading love?

This is all so complicated.

All things considered, perhaps I'll go back to card chewing after all.

Oh, I forgot. I never ever did chew a bank card. Honest!
PS Gail is saying we're going to go for a lovely walk in the hills today, never mind the gale force winds, she thinks it will do both of us good.
Posted by WFT Nobby at 06:23