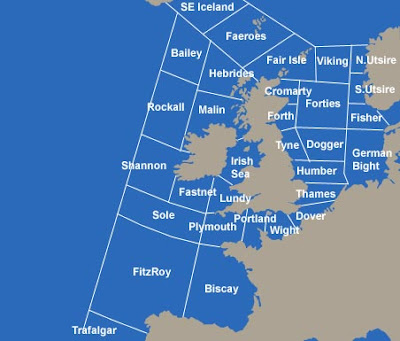 Yes, I am aware that in this blog I write quite a lot about two things that sound the same but are really rather different. And that some of you (especially those for whom spelling is not a strong point) might be in danger of becoming confused.

Let me attempt to clarify.

Gales: these are very strong winds, and we have a lot of them in Scotland, especially on the tops of hills and by the sea. Gales occur more frequently in Scotland than down south in England. I tend to become extra specially bouncy when a gale is blowing. When I was a wee pup I found them scary, but now I just think of them as a good excuse to pretend I can't hear when I am being recalled. Gales can cause lots of damage, as I showed you last month when a car was crushed by a tree on our street during a gale. The shipping forecast on BBC Radio 4 issues 'gale warnings' for the sea areas around the British Isles - see map above. (Many humans who never go near a boat love listening to the soothing repetitive rhythms of the shipping forecast, a gentle reminder of our country's maritime heritage). One thing I like about gales is that they deter Gails from spending too much time on their bicycles.

Gails: these are also, I believe, more common in Scotland than England.  As you know, I live with one. A different Gail lives a few doors up the street from us; she known in this household as 'other Gail'. I tend to be excitable in the presence of Gails as well as gales, especially if I am about to be taken for a walk by one, or offered a treat. Yes, and, come to think about it, you can quite often find a Gail (mine, that is) on top of a hill or by the sea. Gails can also sometimes be scary, like when they have just found that you have chewed up their cashmere sweater. I am reliably informed that when my Gail was a little girl, and got in a bad temper, her brother Max would go round saying "warning, warning, Gail force 10 today!" (Gail certainly never enjoyed listening to this particular forecast....) My Gail can also blow very hard - she tells me she gets way high scores when she does those lung function tests at the doctors. Oh and there are loads of things I like about Gails.

To sum up then, if you live in Scotland, Gails and Gales are something you just have to get used to, and might as well learn to enjoy!