'Trainspotting' or 'Pride and Prejudice'? 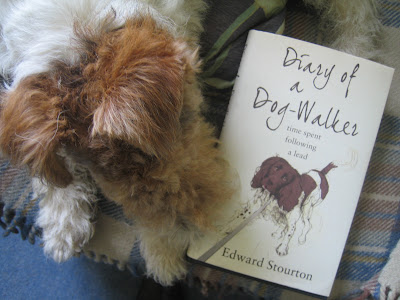 You can't imagine how pleased I've been this week, at last to see Gail with some worthwhile reading material.

Her new book is called 'Diary of a Dog-Walker'. It's by Edward Stourton - journalist, BBC broadcaster and owner of Kudu, a handsome and endearing Springer spaniel.

Mr Stourton is a literary kind of a chap, as you can tell from the following extract:

".... dog walking becomes like reading a novel, or watching a play ..... The novel the Dog and I enjoy in Battersea Park is at the Jane Austen end of the market ..... Here, at home in his local park [Clapham Common] he has a south London life that is more Trainspotting than Pride and Prejudice ..."

You will understand the Pride and Prejudice reference when you read that:

"... I was once approached in [Battersea] Park with an unsolicited marriage proposal, conditional, of course, on a full inspection of his pedigree (the lady in question, with a home off the King's Road and a weekend shooting habit, could not have been a more suitable bride, but sadly the pedigrees revealed that his father was her grandfather). "

Well all this set me wondering, and I asked Gail which book or film she feels we enter when out for our morning trot around our local park.

She thought about it a bit, and said did I know that Duthie Park is featured on the first page of an Ian Rankin crime novel, 'Black and Blue', and is the scene of a gruesome murder? But then she thought some more and said that in reality everyone we meet in the park is friendly and will stop for a chat, and we see the same cast of characters every morning, and she prefers to think of our time there as an urban version of the gentler Scotland of 'Dr Finlay's Casebook'.

I would love to know whether any of my friends feel they are taking part in a novel or play or movie on their daily outings, and if so, which one would it be?
Posted by Bouncing Bertie at 07:15