England, football, and a childhood memory

Well friends, Gail is taking over my blog today, to participate in the 2010 Soccer World Cup 'Unity in Diversity' celebration. I must warn you now that there's lots about football (soccer to my American pals of course) and England (a country I haven't yet visited) and ABSOLUTELY NOTHING, NADA, ZILCH ABOUT DOGS!

Over to you Gail (just this once).

I suspect that I am almost alone amongst the dog blogging 'mums' in having a long standing interest in football, as I was brought up in a fairly sports mad family in the English Midlands and as a teenager wasted many a Saturday afternoon standing on the terraces at the City Ground watching Nottingham Forest.....

The first football game I explicitly remember was the 1966 World Cup Final. I was seven years old and must have already seen other games as by then I was certainly familiar with the rules. My family were on holiday on the Isle of Wight (a small island off the south coast of England) at the time. Mid afternoon, we were having fun at the beach when we remembered the game was on. My older brother abandoned a half-built sandcastle, my mother put away the binoculars through which she had been watching the transatlantic passenger liners cruise past, I licked up the last of my sixpenny (pre-decimal) ice lolly, Dad, who had been enjoying his customary swim far out to sea, hastily returned to shore, and we all headed back to the guest house, to find the other holidaying families in the lounge, gathered around the black and white TV.

The game, England versus West Germany, was already in progress. What's the score, my brother asked. Most of the faces were glum but a Scottish lad called out, in unmistakably gloating tones, 'one-nil to Germany'. I remember this moment so clearly, not so much for the score, but because of my innocent seven year old's shock that a fellow British citizen should be pleased England were losing. Of course England went on to a famous 4-2 victory, but it is sad that my strongest memory of the day is my first ever encounter with the anti-English prejudice that still lingers in some quarters in what is now my adopted home of Scotland. 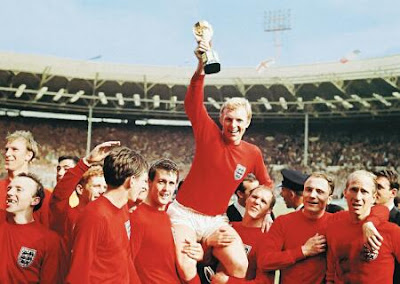 and compare it to a picture of the team taken earlier this year before an England game. 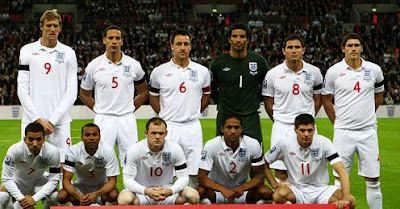 So much has changed in this country in the last 44 years.

Few English families now spend their two-week summer holidays swimming and building sandcastles on our chilly beaches, and those transatlantic liners have long since been replaced by jumbo jets. Schoolchildren are no longer tortured with complicated sums involving pounds, shillings and pence. Does anyone still buy a 'black and white' TV licence?

And we truly are, these days, like South Africa, a 'rainbow' nation (and not just because of the weather...)

Finally, I leave you with this video clip I found on Youtube, because I think it shows, more clearly than my words can express, the excitement and euphoria that football can generate. It's 2008. Liverpool, one of our top club sides, famous for their passionate supporters, are about to play at home in the Champions' League and the entire Anfield stadium is resonating to an ecstatic rendering of the 'Merseyside Anthem'. The picture quality's not great but the atmosphere is electric. Turn up the volume and imagine you're there...

Posted by Bouncing Bertie at 18:45