Puppy class (where was the black pudding?) 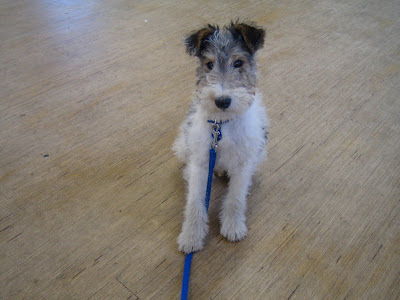 Uncle Eric, you promised. You ABSOLUTELY promised! You promised, you promised, you promised, promised, PROMISED! Yes you did. Did, did, did, DID, DID!!
Did.
You said there'd be black pudding at puppy class.
Gail says I have to learn that life is full of disappointments.
Well you can say that again. (Oh. She did).
I am thinking that I might take after my Scottie friend Bonnie, and be too independent minded for all this formal education business.
I tried to tell everyone. Loudly, repeatedly and persistently. That I wanted black pudding. Where was the black pudding? I wanted it and I wanted it NOW! And by the way, what was all this guff about 'sit', 'down', and walking on a loose lead? I thought I'd made it quite clear I was expecting a quantum electrodynamics lecture, at the very least!
I have to say that all the other puppies listened to me quietly and patiently throughout. I can't imagine why Gail seemed to find this situation stressful and embarrassing, as the other dog Mum and Dads looked on with ever so slightly smug expressions.....
Some of my classmates are a bit of a pushover, you know. Although with Daisy the dachshund, it's hard to tell if you've pushed her over or if she's still standing. 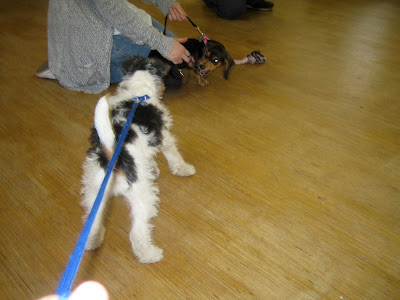 And I quite like cockerpoo Baxter. I mean, he's not as feisty as me, but, well, he can be pretty lively. 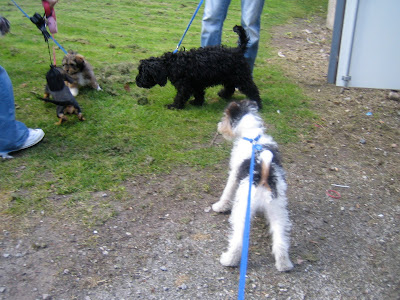 Oh and everyone seems to think Lhasa Apso Freddie is just too cute for words. Teacher's pet, I say! And that's not a compliment...
Beagle Murdo seems a bit wary of me. I can't imagine why. 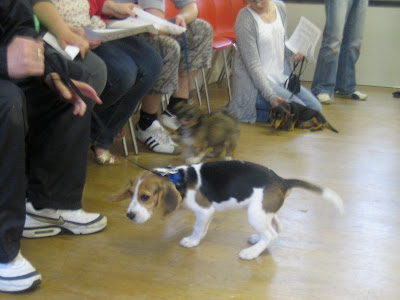 Well outside at the end, I sort of got a chance to 'socialise' with my new pals, and began to see that it might not all be bad, despite the lack of black pudding.
And anyway I live in hope for next week....
Posted by WFT Nobby at 20:27