It seems I have mystified some of my non-British readers with reference in my previous post to 'black pudding', one of our great national delicacies, and Gail says I owe you an explanation. The first thing to know is that, in the same way that 'spotted dick' is not a....... (oh, perhaps we won't go there, google it if you must!), well anyway, I was going to say, black pudding is not a dessert. It's a sort of breakfast sausage, and the main ingredient is pig's blood. It's really really yummy. I guess my wise Aunties Martha and Bailey must be correct when they say that it would make a mess if placed inside a trouser pocket, although have they not heard of polythene bags?
Gail also says that I don't have long on the computer today as we had a very busy weekend and now she has lots of work to do, but she has allowed me to upload a couple of pictures from Saturday of me playing nicely (it can happen) with my neighbour Jockie. 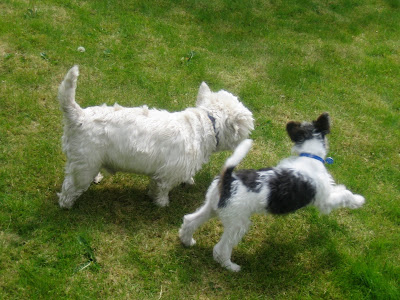 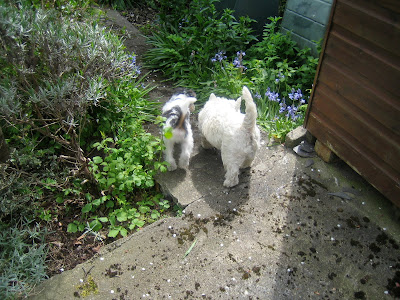 PS from Gail: I want certain doggies out there (I think you know who you are) to be aware that I am very worried about your comments regarding Bertie's behaviour at puppy class. I feel you are being a 'bad influence' and I have told Bertie that I may have to ban him from blogging unless he finds some cyber-friends who will encourage a more serious and constructive approach to his education!
Posted by WFT Nobby at 08:36