In Praise of Human Granny

I am worried now that in my last post I left you with the impression that Human Granny is a rather alarming looking person.

Oh I would hate for you to have that idea. It is true that she doesn't too much like being photographed, but I think she won't mind me showing again this picture of her (and Human Grandad), to set the record straight. 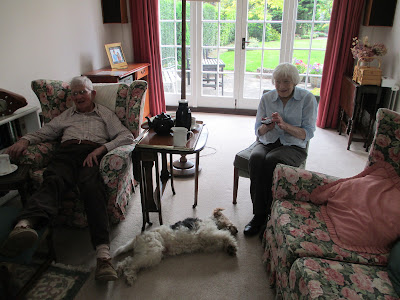 Now I've told you quite a lot on this blog about HGD, so today I want to redress the balance and say some things about HGY.

Gail tells me that her mother had an unusual upbringing, being sent to boarding school, on account of her own mother's ill health, from the age of five. Yes, you read that right, five years old. Four years later, at the onset of World War Two, she and her fellow pupils at St Hilda's School, Whitby, boarded a ship at Liverpool docks, and were evacuated across the Atlantic, braving U boats and a hurricane, finally to reach the safe haven of Toronto in Canada. Brave little Maureen was the only person aboard who was not seasick during the hurricane. After four years in Canada, now a teenager, skilled in ice-skating, cross-country skiing and canoeing, and fattened up on the Canadian diet which included a quart of whole milk per day, HGY returned to the UK, was reunited with her parents and became acquainted with the trials of wartime food rationing in England. She was an able, diligent student, and her father had a fervent desire that his only child be well-educated. Following success at school she took a degree in 'Social Studies' at Leeds University and only narrowly missed out on first class honours. Soon after came a job as Personnel Officer at the Boots factory in Nottingham, marriage to a quiet, handsome Boots scientist nine years her senior, then two children, boy + girl, and a family life altogether more conventional than that she experienced in her own childhood, although she clearly found her later part-time job as a social worker in the City Hospital more stimulating than mundane domestic duties.

You know, I have noticed that HGY is a stoical character, not prone to self pity. Just like for us dogs, I guess it is those early experiences that are most important in shaping humans too.

It was fifty-six years ago that Human Granny vowed to look after her husband "in sickness and in health". I don't suppose she ever then envisaged that one day she would have to remind him of the way to the bedroom and to tell him not to put the butter in the dishwasher. But she doesn't complain, compelled by both love and duty to expend her remaining energies in caring for her ailing and increasingly hard to manage life partner, unable to contemplate the notion that anyone else might tend to him while she is still able.

Oh and I have to tell you that she is always most welcoming when I come to stay, despite her claiming not to be a 'dog person', and that I feel more comfortable and relaxed when I visit her than I do anywhere else in the world.
Posted by WFT Nobby at 17:09