An incident at Newcastle station (It's not what you think)

Haven't you always wanted to visit the fine city of Newcastle upon Tyne? 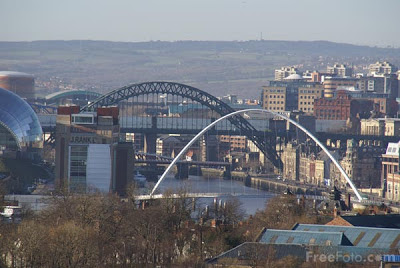 Human cousin number one goes to the University there and number two maybe hopes to. The city boasts fine architecture, old and new, and has a reputation as for great night life and a local accent almost as incomprehensible as Aberdeen's Doric. As my friends over the Pond would say, what's not to like?

Now regular readers of this blog will know that on the way to Nottingham* we always change trains at Edinburgh, where I get a chance to stretch my legs in Princes Gardens and Calton Hill and sometimes meet up with my wiry pal Horatio.

It would be perfectly possible to stop and change trains at Newcastle instead. Wouldn't that be fun? I don't care that there are no green spaces conveniently near the railway station. I want to explore the fine Victorian city streets then cross the famous tilting bridge and visit the spectacular Baltic Centre for Contemporary Art.

Well on Wednesday, as the train was halted in Newcastle station and lots of passengers were disembarking, it just so happened that my collar and lead sort of 'fell off'. Yes really, a gentle backward motion on my part, and suddenly, freedom!

Now Gail is always going on about the importance of seizing the moment.

So I ran past all the suitcases, out of the train door, and, joyful at the prospect of seeing this fine northeastern city, sprinted for the station exit. You could see Gail was excited too, dashing down the platform after me, yelling my name and waving her arms. Gosh, she too was so clearly thrilled at the thought of a night out in Newcastle that she seemed to have jumped off the train leaving all her bags behind. Who knew my owner had such a carefree spirit? The train staff were about to shut the doors and Gail was shouting at them quite a lot as she ran, dodging our fellow passengers.

Well I did pause a moment to let her catch up and, can you believe it, she scooped me up in her arms and jumped right back on the train, about five carriages down from where we were originally seated.

Seconds later, the train pulled out of the station.

Held tight against Gail's chest as she walked down the train corridor, I could hear her heart pounding faster and louder than usual.

And that was my visit to Newcastle upon Tyne.

PS from Gail: The good news is that the expensive 'stopper upper' worked and we at least had an emissions free train ride. Thank you, by the way, for your suggestions for cheaper options.

*For the benefit of any train geeks out there, our full route is the East Coast line from Aberdeen via Edinburgh Waverley to Newark North Gate, then a 20 minute walk across to Newark Castle Station and onto the local East Midlands line to Burton Joyce. We walk one mile from home to the station in Aberdeen and half a mile at the other end to reach the (grand)parental home.
Posted by WFT Nobby at 06:09