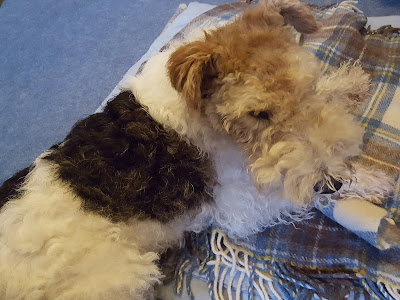 So Gail and I are now safely back in Scotland, and I am delighted to report that Human Granny is recovering from her hospital stay (precipitated by something called a UTI, with complications). She is back in the familiar environment of her care home, being no doubt fussed over by the kind carers and looking so much better than she did a couple of weeks ago.

You will never believe what a colleague apparently asked Gail when she went into the office yesterday morning. 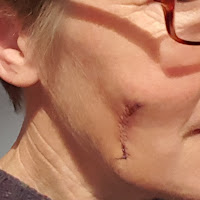 "Oh dear Gail, whatever happened to your cheek? Did Bertie bite you?"

Gail here: it has been a stressful ten days in more ways than one. As if the drama of mother's unscheduled hospital admission was not enough, while down in Nottingham I went to see a nurse about what I thought was a boil which had erupted on my cheek, only to be told it had all the characteristics of a skin cancer. Cue a hastily arranged visit to a doctor to learn I had a 'keratoacanthoma' (a fast growing but usually benign type of tumour). I managed to get it removed on Wednesday afternoon, just before returning to Aberdeen. The wound doesn't look too pretty at the moment, but at least I can't blame it on Bertie!
As
So Gail and I are looking forward to a weekend of recuperation watching the Six Nations rugby, with Gail fervently hoping for an England victory against Wales this afternoon and me willing Scotland to defeat France tomorrow. Go Hoggy and wee Greig!

I would like to be licking Gail's cheek better, but that seems to be frowned on at the moment...