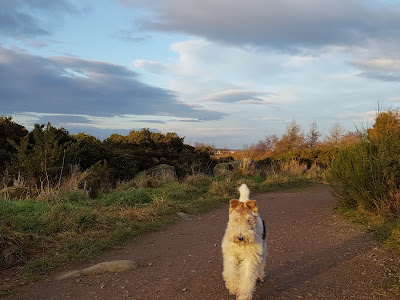 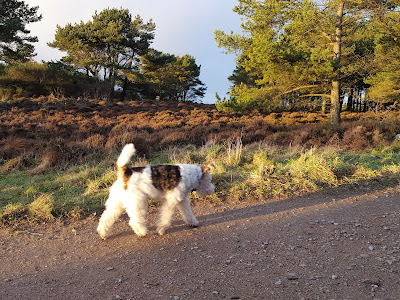 I guess it was all the kind messages you sent after my 'feeling very sorry for myself' post on Monday.

Anyway, I am pleased to report that my poorly paw is feeling loads better, so much so that yesterday afternoon I was able to enjoy an energetic romp around the 'Gramps' (a hilltop nature reserve on the nearby southern edge of Aberdeen, the name is a local abbreviation of Grampians and absolutely nothing to do with grandparents, you understand).

As you can see, we have been blessed with some winter sunshine here, although much of Scotland is covered in snow.

Gail says she is not sure what was going on with my paw. Initially the problem seemed to be a small cut on the underside, between the paw pads. This become infected and the vet gave me antibiotics and it all seemed to heal up nicely after a couple of days. But then a few days later, last weekend, the same paw become swollen and I was really uncomfortable and didn't want to walk at all. Gail feared one of the dreaded interdigital cysts was developing. Except perhaps it wasn't as by Tuesday I was feeling right as rain again. Paws crossed it stays that way - I had such a horrid time last winter with those evil cysts.

As a result of this latest podiatric hiccup, Gail and I have been wondering if any of our friends can recommend brands of protective boots which might help keep my precious and sensitive front paws out of trouble for the rest of this winter? As you know, I am an adventurous hiker and like to go out in all weathers, and so the boots would need to be quite rugged. (I do have a pair Trixie 'walker' shoes but they tend to slip down off my paws after I have walked a short distance and I don't really like wearing them). Oh and Gail says any boots would need to be easy to put on, which I think says more about her shortcomings than mine...
Posted by WFT Nobby at 06:00