BBB is 'Tamed' by Alice Roberts?

Gail and I read a most fascinating and canine-relevant scientific book during our Christmas stay in Nottingham, so of course I, Bouncing Bertie Boffin (BBB for short) am bursting to tell you all about it! 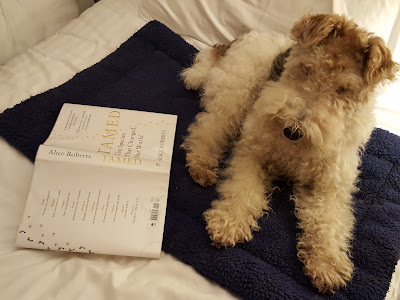 'Tamed: Ten Species that Changed Our World' is by Alice Roberts, and it is all about how, when and where different plants and animals were domesticated.

I knew straight away I opened the book that Professor Roberts had her priorities in order when I saw that Chapter One concerned my very own species.

Before I tell you more about the dogs chapter, I want to remind you that nowadays archaeologists can combine and enrich their findings with results from ever more sophisticated techniques of DNA analysis and radiocarbon dating, and what was once a matter for speculation now rests on more solid foundations.

Did you ever hear about Razbo, whose skull was found in 2011 in Razboinichya Cave, in the Altai Mountains of Siberia? It seems that, at c.33,000 years old he might just be the most ancient dog yet discovered.

Now there has been a fair bit of controversy concerning Razbo. The problem is that, when only a skull is available, key indicators of 'dogginess', such as the tendency to tilt one's head endearingly in order to extract another expensively tasty shop-bought treat from one's human, cannot be verified. What we do know is that Razbo had a snout that was short and broad - a feature typical of us domesticated types. However, the structure of Razbo's jaw is rather more wolf-like than anything one might encounter at Crufts. Anyway, it is now the settled view of the experts (at least until someone comes along and does another study - such is science) that Razbo was indeed a dog, who pre-dated the last Ice Age and lived companionably alongside a community of hunter gatherers, well before anyone thought of settling down to farming and all that Neolithic carry-on.

What else does Professor Roberts have to say? Well it seems that in the process of dog domestication, selection has acted in favour of the ASIP gene (Agouti Signalling Protein, since you asked). This gene acts to diminish aggression and it also encodes a protein involved in mediating pigment production. So a gene which modifies behaviour can come with the unexpected side effect of altering appearance. Which helps explain why you get affable, multi-coloured pups like me, all in one simply adorable package!

Oh and one more thing. Do you ever eat cereals, rice or potatoes? I confess I do sometimes. I now know that I can digest these foods because, unlike wolves, I possess multiple copies of the gene for producing amylase, the enzyme for digesting starch. What's even more interesting, I think, is  that modern dog breeds vary in their exact number of copies of the amylase gene, and the breeds who have the most amylase genes tend to be descendants of dogs from parts of the world where a lot of cereal was eaten.

(On the subject of diet, I am thinking it a pity that dog domestication did not originate in a cocoa growing part of the world, where selection pressure would act in favour of genes for chocolate tolerance. Just a festive flight of fancy....)

Anyway, Gail says I have rambled on for long enough.

Gosh I just want to say finally that all the other chapters in 'Tamed' are very interesting too, even though they are not about dogs. Yes, really!