I knew something was up when I caught Gail cleaning the chain on her bicycle. 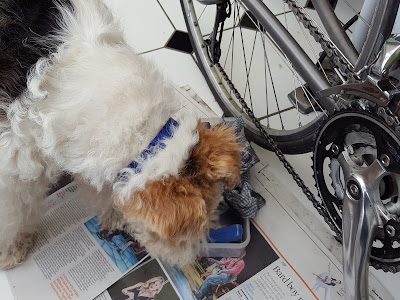 Finally, she confessed. In a few days time she is heading off to the USA to visit her dear friend Marse in Tacoma, WA. She will be away for over two weeks and during that time she and Marse will be joining a group of Marse's friends for a bicycle tour around NW Montana.

You know what? I am not concerned for myself (in truth the boarding kennels aren't too bad, although don't tell anyone I admitted this). But oh gosh I am VERY WORRIED about Gail.

Among my fears are:

The one thing that reassures me, is that a certain pair of esteemed Blogville former mayors (and their humans) will be meeting up with Gail one afternoon in Tacoma.

It's such a relief to know that blogging friends I trust and respect will be checking up on her.