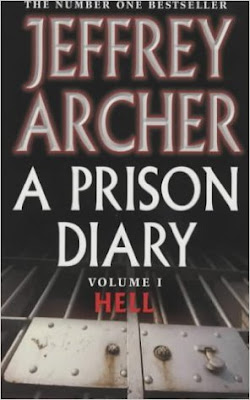 Just before dropping me off again at 'camp' the other day, Gail waved a book by Jeffrey Archer in my face in a mildly threatening manner and addressed me thus:

"So Bertie, rather than whinging endlessly about this place you insist on calling prison, why not make good use of your stint 'inside' and write a journal, like other high profile convicts have done? For sure we'll have a blockbuster on our hands before you can say disgraced Tory politician".

Having taken a wee peek at Mr Archer's bestselling effort, I concluded that book buyers can't be such a discriminating bunch as sometimes made out, and I might as well follow Gail's suggestion.

Day 1: Was taken to my cell by a prison officer called Emma, who bolted the door and disappeared. Dogs in neighbouring cells were barking so I decided to join in (although I am usually a quiet chappie).  Was taken out for a brief walk and given some food. Barked some more. Fell asleep eventually.

Day 2: Joined in the canine dawn chorus. Went for an early morning walk with Prison Governor Wendy and fellow inmate Rory the German shepherd. Wendy, a former Scottish track cycling champion, asked me if Gail was away on another bicycle tour. As if I was actually interested in this topic! I growled at Rory then ignored him. Back to cell.  Ate breakfast. Then entered into an 'I'm having the last yap' contest with Lhasa Apso neighbour Freda. I won. Later, am taken out for another walk. Barked some more. Slept some more...

I like to think I have mastered a range of writing styles, but even I - not always the most self-critical of creatures - can see that this diary is turning into a less than riveting read. Is prison life really so dull? Where are the inmates whose backstories involve gut-churningly gory crimes? How can I provide fascinating insights into the prison's social hierarchy when all I see around me is a bunch of common or garden dogs who bark a lot? As an innocent pup with scientific bent, I am scarcely a candidate for some sensational, life-transforming religious conversion while inside. It's hard even to write about how bad the food is when I'm getting my normal diet, albeit with a slightly restricted supply of gravy bones.

You know what? That Jeffrey Archer fellow had it easy.