Small talk in the park 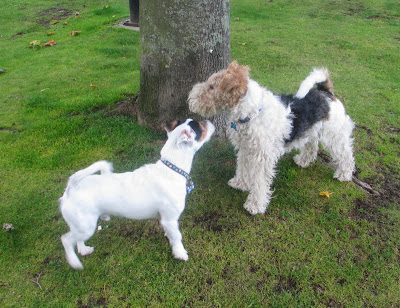 Yes it's a she. Hard to tell sometimes I know with these dog walking clothes they wear. As for age, she's in her mid fifties, not quite as fresh-faced as she used to be, but I love her all the same.  How old's your one?

She's says she'd be nine if she were a dog, so I guess that's about the same age.

Well I have to say she looks in pretty good nick. Do you mind me asking where she goes to be groomed? Really, it's embarrassing being seen out with my human, she is so resistant to the idea of getting spruced up etc.

I guess they have to be trained when young, or else it's a hopeless case. Can't teach an old human new tricks, eh? Tell me, do you often let yours off the lead?

Oh absolutely. I keep an eye on her, of course, but she's pretty reliable on the whole, except if there's an ice-cream van nearby.

And is she well socialised with other humans?

Gosh, that's a hard one. She's OK with small groups, but put her in a big crowd and she gets a bit anxious.

You know I've noticed mine is fine so long as the other humans aren't too, well how shall I put it, loud and overbearing.

Do you find that yours needs a lot of exercise? Mine certainly does. Far more than all the human books suggest is necessary for a typical middle aged Anglo-Saxon female.

Oh no, mine's just the opposite. I have to drag her out of bed every morning. She's only really happy when lying besides me on the couch watching the telly and munching chocolate.

Well now, I think it's time to be off. Work to do - digging the garden and hoovering the floor, you know how it is...

Nice to meet you. Cheerio then.

See you again soon I expect. Cheers!
Posted by Bouncing Bertie at 06:03