Boy am I missing you here in Nottingham. Won't be flying down again until the airline starts letting dogs on board. Without you to cuddle and to give me an excuse to escape the house for a walk every morning, I feel quite the grumpy old woman. But Human Granny and Grandad send you hugs. Sometimes I think they'd rather it was you who came to visit and me who stayed behind in Aberdeen.

Anyway, here is a photo of HGD watching the rugby on TV. 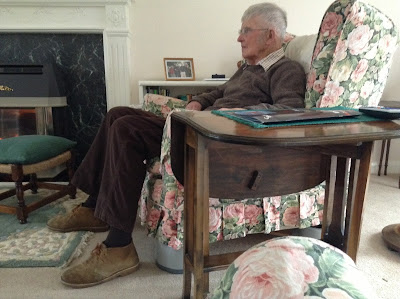 I don't think he knows any longer which country plays in blue and which in green, nor who is winning, but at least he settles down in his favourite chair and seems happy enough experiencing the familiar pattern of action. Unlike last night when I tried to view Crufts - it was the toy dog judging - and he became all agitated and kept asking "Gail, what are we going to do about this?" Maybe he would have preferred to see the terrier class.

Oh and another reason I wish you were with us. Do you remember how on your last visit to Nottingham you were busy inspecting the hole under the hedge by which the badgers had entered the garden? 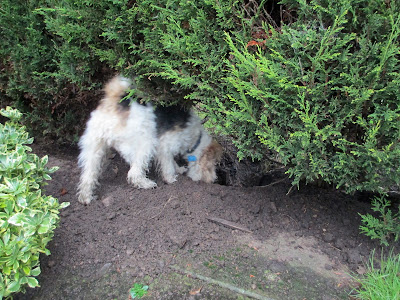 And how you vowed to scare away the invaders to prevent them from digging up HGD's once so lovingly tended lawn?

Well the bad news is that Mr Brock and his gang have been back on the rampage and the grass is even more messed up than ever. 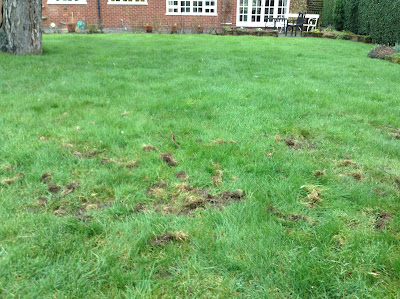 Anyway, I am sure you won't be worrying too much about that while you are 400 miles away and being treated royally by Marie-Thérèse and by Jakey's Mum and Dad in my absence.

Looking forward SO MUCH to seeing you tomorrow night.

Wow Gail you have NO IDEA what excitement we had on our street yesterday morning!

I'm sure that Jake's Mum will tell you all about how I protected her and Jake's Dad from a drunken but harmless inadequate highly dangerous criminal whom they found hiding in the back of their car. And how Jake and I were put on guard duty while the police were summoned. You can guess how this evil man was terrified into submission after I barked and barked and barked at him. Really, Jake might be bigger than me, but I think we all know who can sound the more ferocious.

I understand that rewards are often given for heroic acts of valour. A medal or something. So far, I have to say, I have not received a even a gravy bone for my considerable efforts. Perhaps, on your flight back, you could think about how to remedy this......

Oh yes and that was a very nice photo of HGD, but I might just point out it would have been greatly improved had a certain exceptionally brave fox terrier been lying there and warming poor HGD's always cold feet.