Overconfidence - a trait shared with HGD?

You know how I told you a few days ago that I was sure I had won the agility competition, and found it hard to understand why the judges decided otherwise?

Well Gail is saying that my problem is "over-confidence".

What's more, she claims that this trait has been evident from the start. For example when I was a wee pup I would go up to big and aggressive looking dogs and bounce all over them, confident that they would want to be my friends, even when their body language indicated just the opposite.

So I was thrilled to learn that Human Grandad has also long been seen as over-confident. Recently, when Gail was trying to dissuade him from attempting to walk further than his aged muscles would permit, he replied, in a rare moment of verbal fluency, by telling her how, when he was training to be an RAF pilot in Oklahoma, his flying instructor would tick him off for failing to recognise the limits of his ability and for attempting manoeuvres that were unwise and even dangerous.

I am so proud and happy to have HGD as a role model!

Or should that be roll model? 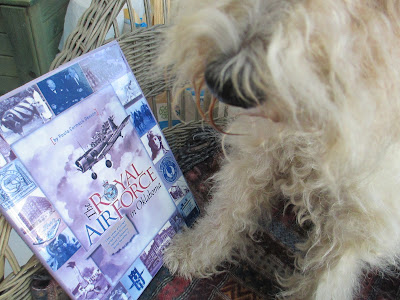