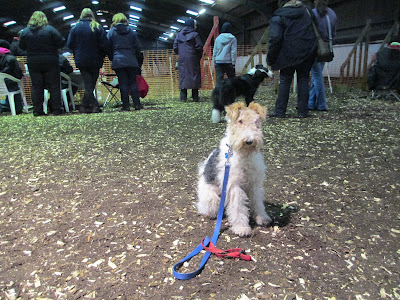 You know I thought I was there at the Loanhead Equestrian Centre yesterday morning in order to enter my first ever contest, the Devanha Dogs Just for Fun Agility Show. But when, at the start of the day, I saw the humans 'walking the course', for a moment I wondered if I'd got it all wrong and Gail was taking part in a sequins-free version of 'Strictly Come Dancing'. 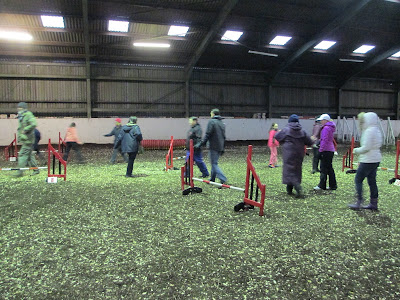 Well apparently that is all part of the proceedings. I also learned there's an awful lot of hanging around at agility events. And that unheated barns in December in Aberdeenshire are very cold.

Luckily, Gail had the foresight to bring Hamish's old coat along for me (and yes, I really did use the words 'luckily' and 'coat' in the same sentence). 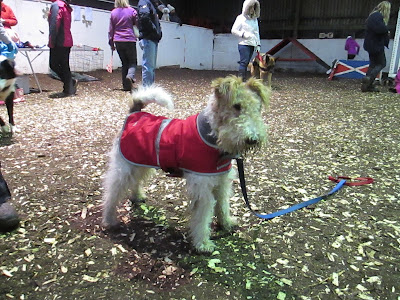 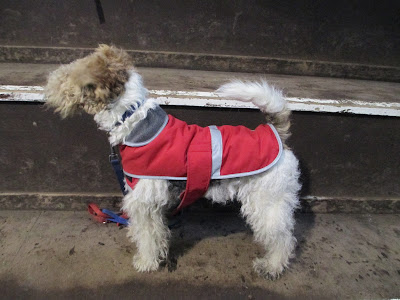 I think Gail was was a bit envious of the more experienced handlers who wrapped themselves in sleeping bags whilst waiting their turn. If you are thinking that she looks chilled to the marrow in this next photo, you would be right. 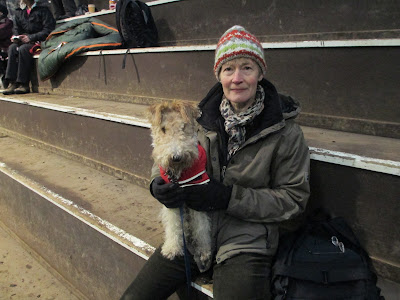 Oh, you are in fact wondering how I performed in the agility ring?

I mean, I was so confident I was winning, but it seems that judges have strange and narrow-minded ideas about what constitutes a faultless round.

Lots of the dogs boringly restricted themselves to running and jumping over the obstacles, so I would have thought, having demonstrated that I too was perfectly capable of clearing a couple of medium sized hurdles, that my initiative in then going off-piste to inspect the far end of the barn before resuming the 'official' route should have earned me extra points, but the judges thought differently. Likewise, running straight along the 'dog walk' is just so dull when one can demonstrate one's agility - after all that's what it's all about isn't it - by jumping from left to right and back again, several times, across the lower end of the ramp. Oh yes and lastly, having heard Gail complaining about me not sitting patiently at the start on my first two goes, on my third and final event I decided to show her how well I could sit. And sit. And sit....

After all that carry on, it was eventually time to leave, and in the car going home Gail was saying some very odd things about how maybe it was good that my performance was so "erratic" as it doesn't always do to peak too soon and thus leave no scope for improvement next time around. 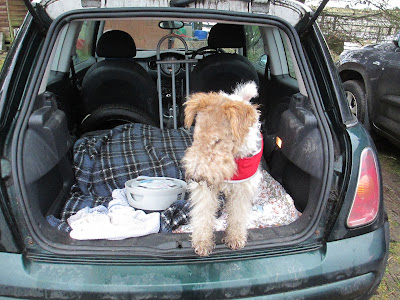