Has it ever occurred to you that the human species is not quite as bright as it's cracked up to be?

Well I could think of a multitude of examples to make my point (and no doubt you can too) but I'm just going to tell you about this new book that Gail's been reading this week. 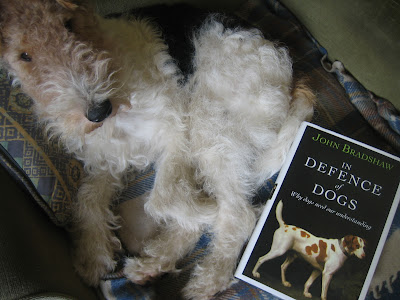 'In Defence of Dogs". I think you'll agree that the title looks promising.

And as you know, this is a scientific household, so the fact that the book is by John Bradshaw, an anthrozoologist* at Bristol University, and is claimed to "use science to advocate for a better life for companion dogs" is also in its favour.

But hang on a minute.

CAN YOU BELIEVE IT'S TAKEN 20 YEARS RESEARCH FOR THIS BLOKE TO CONCLUDE THAT DOGS DO NOT BEHAVE THE SAME AS WOLVES??!!

He could have saved so much time by coming to stay with me for a few days. After all, what wolf:


Oh. Wait a minute. Gail is telling me maybe there's more to it than not being a wolf. The author is saying that dog behaviour is all about sociability and cooperation rather than strict hierarchies. So the idea that us dogs need to dominated by their human is quite wrong.

This is beginning to sound much more interesting.

I have to tell you that Gail is only about half the way through the book, so if she finds out anything else useful, I'll pass it on. 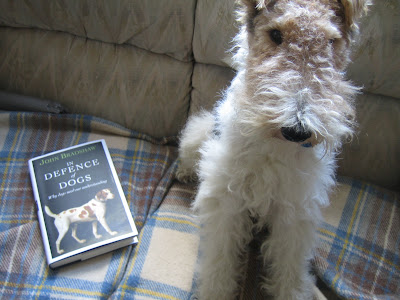 *Anthrozoologist: that's someone who studies the science of human-animal interactions