The consolation of philosophy 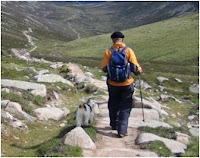 You would think from this photo that Gail's friend Michael and I were getting along quite companionably by the end of his visit.

Well, "up to a point, Lord Copper". Or at least, we co-existed peacefully provided the following conditions were met:

But sadly, I have to say (British understatement here) I do not think that this particular human being, fine gentleman though he is, Gail assures me, in all other respects, will ever be persuaded of the joys of dog ownership.

It is of course hard not to take this personally. But I shall try to be philosophical about the matter.

I am thinking how lucky I am to live with someone who tolerates my occasional naughtiness, and makes allowances for certain facts about my breed that have long been recognised:

"Fox-terriers are born with about four times as much original sin in them as other dogs."  ~Jerome K. Jerome, Three Men in a Boat