Well of course, I hear you saying. A distinctive little chappie like me. Why wouldn't he?

My bloggie pals may have noticed that I wasn't much in contact last week. You see I was s'posed to be going down to Nottingham with Gail to visit her parents. I would have been the star attraction, as you will already have realised. But sadly this time it wasn't be be - something about a favourite aunt's funeral in Sussex and it all getting too complicated. So anyway, I had to stay behind in Aberdeen.

Now I am sorry to have to tell you that human Grandad's memory is not so good as it once was. He finds it especially hard to recall names of places and people. And he gets rather confused about things in general these days.

But guess what! Gail came home last night and she told me that almost the first thing human Grandad said when he saw her was "How's Bertie?" And later, more than once, "I do hope Bertie is OK", and then, when they were setting off for a short walk down to the River Trent, "what a pity Bertie's not here to come with us". He only once said "Hamish' not 'Bertie'.

It will be human Grandad's 90th birthday in November. Gail has promised me that, absolutely come what may, I will go down to see him then, if not before.  Oh I do hope so. I know he's a bit unhappy at the moment, anxious 'cos he's aware his brain doesn't work as well as it used to. I'm sure I would cheer him up. 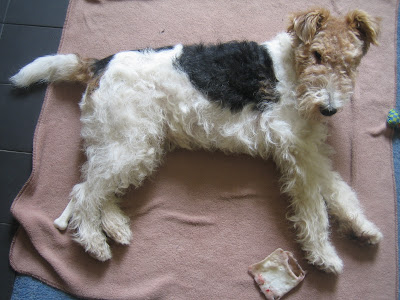