I have the solution for Britain's cash strapped armed forces!

Cutbacks in spending have compelled the RAF and Navy to decommission their fleet of Harrier 'jump jets'.

Well anyone can see that it's useful for the military to have at their disposal something that can spring vertically into the air from a standing start and attack.

Let me introduce you to 'Burns', an American rat terrier and fellow trainee at Deeside Dog Agility Club. 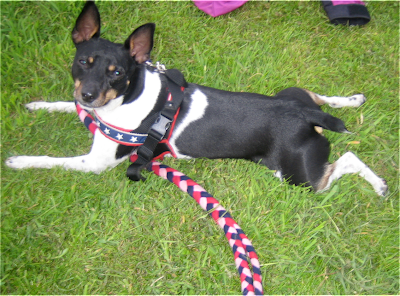 This alert little fellow, despite legs shorter than my own, can leap several times his own height with no run up at all!  And although he has always been friendly to Gail and me, I can see that he has a fine set of gnashers, which could prove handy in combat mode.

Now I am no economist, but I am pretty sure that a Burns would be cheaper to run than a Harrier jet.