Leaping about in an excited state...

Welcome, students, to this the latest in my lecture series for budding canine scientists. Today, we tackle quantum physics. Do pay attention.

I am delighted that several of you already have engaged with the subject. Your answers to my Schrödinger’s cat question were most interesting and, er, creative…..And a big well done to the Special Wires, the only dogs apparently to appreciate the difference between a thought experiment and a real one. Back to the top of the class after that wee ‘hiccup’ on the Field Trip!
But I do know what some others of you are thinking – “Oh, no, quantum physics, this doesn’t sound like my cup of tea at all, Bertie.  Tell you what, I’ll pop back later when you’re posting some cute photos or telling a story about pinching your granny’s home baked scones….”
Well, if you want to pass up on this unique opportunity for improving your mind, so be it.
I’m not denying it has been something of a challenge, deciding how to present quantum physics in a canine-friendly fashion. But I would not be a true terrier were my middle name not ‘tenacious’.  After reading widely and deeply on the subject I am pleased to say I have come to realize that us dogs in general, and wire-haired fox terriers in particular, embody several of the key concepts of this particular sub-atomic science, at a macro-level, as I explain below!
For starters we – especially the younger pups - can surely relate to a theory based the notion that a burst of energy produces a tendency to suddenly leap about in various different and unique states of excitement? And there you have it; the quantum jump and the Pauli Exclusion Principle in a nutshell. Easy peasy.
Yes indeed, the rules for the quantum world might only apply at an atomic scale, but the basic concepts are ones that we can all readily comprehend.
The fast moving amongst us will have already observed that our humans often find it impossible to determine exactly where we are and how quickly we are moving at the same time. In fact a perfect illustration of the famous Heisenberg uncertainty principle! A related issue is the problem of the measurement system interacting with the thing being measured, and vice versa. Supposedly a difficult idea to grasp. Well I ask you, how often have you been to the vets and chewed up the thermometer? The real mystery is quite why anyone thought this measurement problem remarkable enough to even mention, much less mull over for years and write scientific papers on. 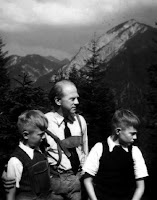 Incidentally, this Heisenberg (left) sounds a mighty sensible chap, as well as smart (and despite his apparent fondness for lederhosen). When he needed to solve a scientific conundrum he would go for a hike in the mountains and the answer would come to him. If only he had had a dog to walk, then surely the still elusive unified theory of absolutely everything would already have been in the bag… 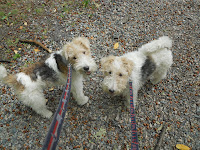 On to another key aspect of quantum theory. Paired electron spin.  Think Agatha and Archie (right). They may not have realized it at the time, but our dear wire-haired friends in Boston provided a perfect illustration of this principle in their blog a week ago – click here and watch the short video at the very end of their post and you will grasp the spin thing quite quickly, I am sure*.


Yes the more you think about, the odder it is that some humans have found the concepts of quantum physics a teeny little bit challenging. When it all becomes so clear if thought about in terms of wire-haired fox terrier behaviour!  Consider my own good self. On one hand, I can be seen as an adorable little chappie who loves nothing more than to cuddle up on a friendly human lap and gently lick the hand that strokes me in an affectionate and endearing, butter-wouldn’t-melt-in-my-mouth manner. Whilst at the same time, I can be a true terrorterrier, ever ready to bounce into action, teeth bared, and tear to shreds the nearest cat flap or cashmere sweater at a moment’s notice. I expect that several of my students recognize in themselves this dual nature too? Why then should a ray of light (an infinitely more simple entity than a wire-haired fox terrier, we might all agree) not be both a stream of photons and an electromagnetic wave, as Louis de Broglie proposed in his ‘wave-particle duality’ hypothesis?
Then of course we have action at a distance, and the related idea of entanglement. Two more basic tenets of the quantum world. And both so very familiar to dogs with blogs. I mean, how many times in the past year has ‘the Power of the Paw’ been invoked to aid an ailing fellow canine? Do we care if you are in Australia or Atlanta, France or the Philppines,  South Africa or Scotland? We do not. A few keystrokes in one part of the world and the impact is felt on the other side of the globe. Action at a distance indeed.
So dear Asta, my favourite New York based WFT. I hope you now can see that quantum physics is really very simple, and that you might even be able to explain it all to your Mommi in a way she can understand. Perhaps, with your help, she could now even retake that Physics 101 course 105 years later and snag a decent grade!


*By the way, I believe that Agatha has prepared a side lecture, which she claims (??) will complement this one, on 'how to deal with a brother who is a crazy man'. As they say on Agatha's side of the Pond, "Go figure".

Posted by Bouncing Bertie at 05:58