At least somebody cares

It seems Gail had some explaining to do on Saturday morning!

A nosy concerned neighbour spotted her walking back up the street from the direction of the park, without me! The neighbour rushed to her front gate and in a panic cried:

I have to tell you that my owner is pathologically honest, not tremendously imaginative, and in situations where a simple fib might make life easier all round she usually ends up giving a tediously truthful explanation.

"Don't worry, Bertie is safe at home. We went to the park earlier and on the way back I stopped off to buy a newspaper."

"Oh no! Don't tell me! Someone stole Bertie from outside the paper shop! There's a lot of it going on at the moment. A friend of a friend of mine in Cults who has a garden separated from a field by a low dry stane dyke had her dog taken just the other week, and then I heard this other story..."

Gail manages to interrupt the flow.

"No no, it's all OK. BERTIE IS SAFE AT HOME. It's just when I went to pay for my Guardian I realised I'd left my purse at home and so the cashier said don't worry, take the paper and come back later with the money. So I went back right away to settle up before I forgot all about it, but didn't take Bertie, which is why you now see me walking up the street without the dog."

The neighbour may or may not have taken this in, and resumes her lecture on the dangers of dog theft in the area. Gail keeps to herself the thought that the neighbour might be exaggerating based on limited data, and eventually escapes and arrives home a second time.

It would all have been so much simpler if Gail had just told the neighbour I'd decided to have a lie in ... 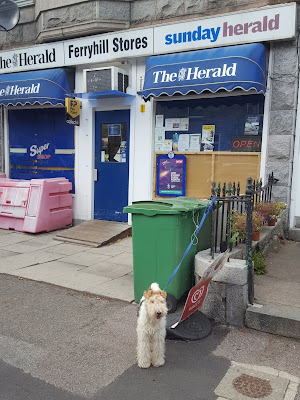 PS Gail is well aware that the whole concept of going to a paper shop and actually buying a weekend newspaper with real pound coins is making her these days sound like a prehistoric relic, but some lifetime habits are hard to break!
Posted by WFT Nobby at 06:00