We are all designer dogs 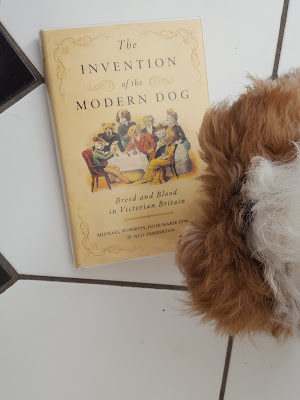 For once, Gail brought home from the library a promising looking book last week.

'The Invention of the Modern Dog' is all about how the concept of distinct dog breeds was developed in the UK, from around 1850 to 1900.

Of course I was mostly interested in my own breed and so turned straight away to the index and looked up all the entries for Fox Terriers.

I am pleased to report that we were recognised as a distinct category of terrier in the very earliest of dog shows, along with Skye Terriers, Bedlington Terriers and Dandie Dinmonts (but not Scotties and Westies).

Reading further, we learned that the Irish Wolfhound was once virtually extinct and had to be 're-invented' by incorporating a mix of Deerhound, Mastiff, Borzoi and Great Dane. And that the St Bernard as we know it today bears scant resemblance to the original types bred by monks in Switzerland around 1700. In fact almost all the dog breeds now thought of as 'traditional' are a result, to a greater or lesser extent, of judicious cross-breeding. There is nothing new about a cockerpoo!

I was fascinated that Francis Galton (better known as the father of 'eugenics' and cousin of Charles Darwin) proposed a programme of breeding dogs for intellect rather than appearance, while suggesting that the reason no-one had so far pursued this idea was that "...intelligence makes them [dogs] of little value as slaves..." and that intelligent dogs "... are too critical of their master's conduct..." 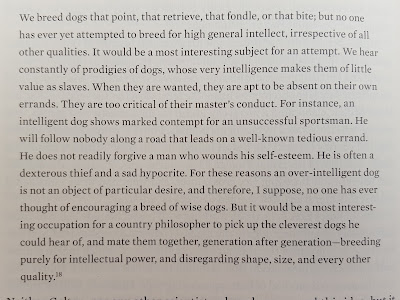 Gail, who actually did read the whole book, says that it was "interesting in parts", but by the end she felt she'd learned rather more than she needed to know about the infighting between the human factions involved in developing breed standards and organising shows in the Victorian era.

Well if she'd only listened to her own very intelligent Fox Terrier and followed his focussed approach to selecting the best bits!