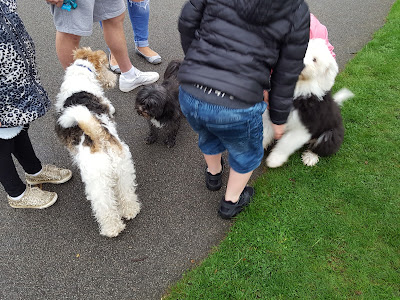 Sunday morning in Duthie Park is 'meet and greet' time and this week I was introduced to a grand new pup called Dexter. 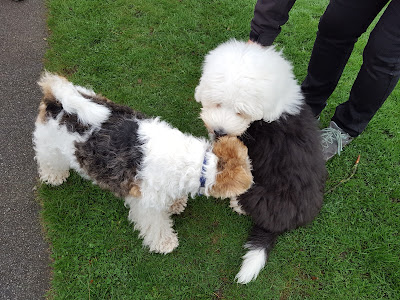 Can you believe that Dexter is only 14 weeks old and already bigger than me! 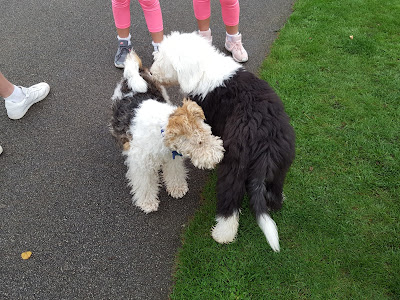 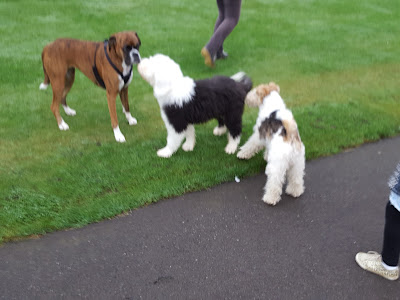 He is, of course, an Old English Sheepdog, a breed we rarely see in these parts. (Gail thinks that might have something to do with the label 'English'.)

When Gail was herself a youngster - actually a stroppy adolescent - in Nottingham, her mother's friend Angela owned an Old English Sheepdog called Nell.
I know Gail was very fond of this dog, but still I am thinking that her imitation of Nell's hairstyle was ill-advised. Gail asks in her defence asks how many of her readers can offer photos of themselves as teenagers which feature well-advised hairstyles...

Angela herself (a consultant geriatrician) was rather better groomed.

Nell was a calm and gentle character. She was apparently a reluctant walker, who after about half a mile would tend to sit down and refuse to move further. Worried about this, Angela once took her to the vet to have her checked over. Following a thorough examination, the vet pronounced that there was absolutely nothing amiss with Nell, and added "I'm sorry Dr Truman, I think you've just got a lazy dog"!

Nell lived on to a ripe old age so we guess the vet was right.
Posted by WFT Nobby at 06:00