So Gail arrived back from St Petersburg just before midnight on Monday, and wanted to know all about how I had got on with Neil over the weekend.

Well I simply told her that I had enjoyed a lovely time at Neil's 'eco-home' retreat near Inverness, but we had agreed between us, he and I, that "what goes on at Kiltarlity stays at Kiltarlity".

And anyway, I think Gail wants to tell our blog friends about her trip (if that is not breaking the terms and conditions of this blog).
Gail here:

First of all I want to thank all of you who heard about Monday's terrorist attack in St Petersburg and expressed concern for my safety and that of my friend Yvonne. Please be aware we are both fine.

Secondly, I want say that my thoughts are with all the victims of the attack and their families, as they come to terms with this terrible event.

Usually in these circumstances, one can simply reassure friends that of course we were miles away from the atrocity, and it didn't really affect us at all.

Although we were not directly involved in the terrorist attack, we were in fact far, far too close for comfort. My friend Yvonne and I were in the Nevsky Prospect metro station, trying to board a train heading in the direction of the airport, when the bomb went off one stop down the line. So for about 15 minutes no one knew why all the trains had stopped, then fragments of news filtered through, the station was evacuated and the whole metro system closed down. On the streets outside it was chaos with the place swarming with emergency vehicles and sirens going off everywhere. Thankfully, guided by a lovely young Russian man who spoke quite good English, we managed to get to the airport by bus (actually 3 buses) arriving just in time for our flight to Frankfurt.

At one point our very crowded bus was diverted onto a side street as the main thoroughfare had been closed, and we got stuck between parked vehicles for 20 minutes - the photo below is of the bus being guided along the road, inch by painful inch! 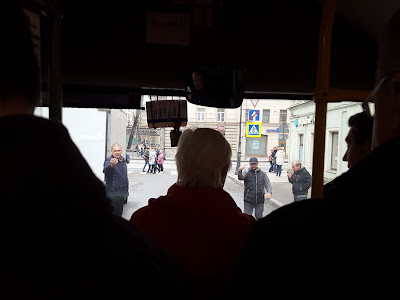 On Sunday afternoon I took this photo of Yvonne at the pristine Tekhnologichesky Institut metro station and emailed it to my mother: 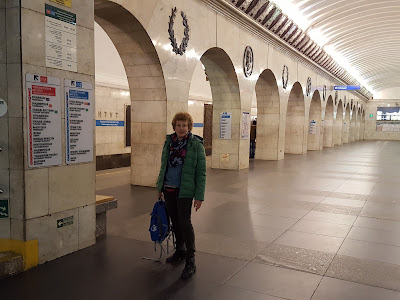 And this (from the BBC website) was the scene 24 hours later: 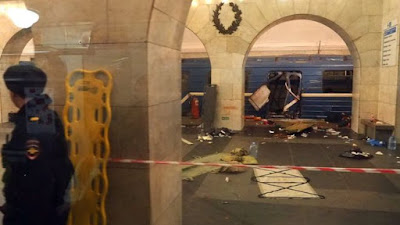 So sad that such terrible events keep happening.

But I must add that,  despite the unnerving ending, Yvonne and I had an absolutely fascinating time exploring this magnificent city, and neither of us would hesitate to go to St Petersburg again.
Posted by Bouncing Bertie at 19:28